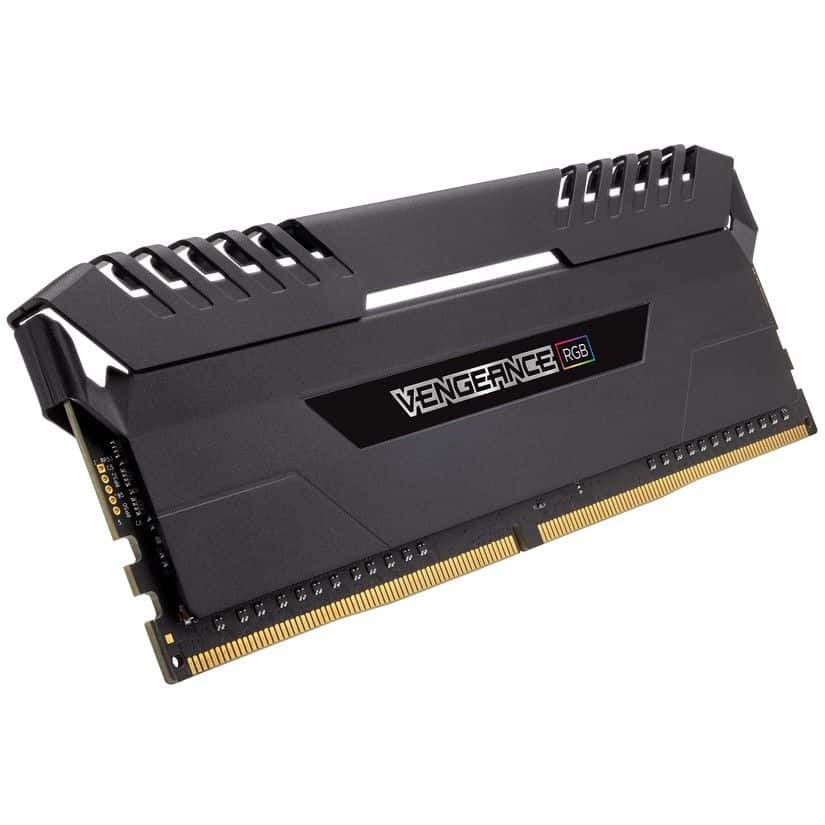 From the beginning of 2017, the focus of the technology community has been on AMD Ryzen as well as RGB LED trend. In most Ryzen reviews, I always emphasize the importance of RAM clock because it greatly affects the gaming performance of this CPU line. Understandably, the R5 1500X CPUs and above are the microprocessors that own two CCX complexes connected by AMD’s Infinity Fabric technology, which has a bandwidth speed depending on the RAM clock.

One current limitation is that the Ryzen CPUs and the new AM4 motherboards only support RAM clock rates up to 3200MHz. Not only that, Ryzen is also quite picky about RAM, which makes it difficult to pull RAM clock to the tested level of the manufacturer, even if you are comfortable timing. Usually the stable clock of Ryzen systems only raises to 2667MHz or 2993MHz and 3200MHz is quite luck.

Corsair Vengeance RGB 4x8GB 3466MHz. With RAM tested in this terrible frequency, the setup is one step lower, at 3200MHz, which is much easier. In addition to good performance, this is an extremely trendy RAM kit by being equipped with RGB LED system. Currently, this RAM line is only slightly inferior to Dominator Platinum, which has a much higher price.

Packing of Vengeance RGB is quite simple, nothing stand out from other brothers or rivals. The front part of the box prints images as well as product specifications. Above is the genuine Corsair warranty stamp with a 1-for-1 policy, giving users peace of mind when purchasing their products. The RAM bars are placed in plastic boxes to fix and protect the product at the same time. In 2-bar RAM kits, Corsair will cut the back of the box to reveal information such as serial number, clock, timing and maximum voltage tested by the company.

The radiator part of Corsair Vengeance RGB is quite bulky by integrating RGB LED strip at the top. The lumpy aluminum heatsink of this RAM kit feels cool, giving an extremely high-end feel, as well as the world’s leading memory manufacturer. The sail logo on the top of the normal RAM will look faintly glowing when operating with LED lights below.

where can you get a Corsair Vengeance RGB 3466MHz online

One drawback of Ryzen is that the ability to pull out RAM when running 4 bars is quite limited. Therefore, in my experiment, I decided to install only 2 bars to suit the configuration. New Intel CPUs will make better use of this RAM stream. However, don’t worry, AMD is releasing a new Microcode microcode update to improve Ryzen’s RAM compatibility.

The Corsair Vengeance RGB LED strip is indeed very bright. Even when placed next to strong light sources such as LED fan or LED case, the color is not affected.

Although Corsair announced it will support soon (temporarily not supported), controlling the Corsair Link LED on Ryzen and X99, MSI and Gigabyte motherboards quickly updated the BIOS and its application to control the lights. LED on the Vengeance RGB. Therefore, I can easily adjust the LED effects of RAM with the MSI Gaming App only without having to install any additional applications.

Temporarily only have 4 simple effects as in the video below, but I guess Corsair will update more for this advanced RAM soon. One advantage of Corsair Vengeance RGB compared to direct competitors, G.Skill Trident Z RGB is a very smooth and convenient LED control software, no need to install additional drivers and is still beta with dozens of bugs and pretty unstable.

In addition to the various functions, it is impossible not to mention the formidable performance of the Corsair Vengance RGB. Thanks to a stable test of 3466MHz pulses, this RAM kit is easy to push to 3200MHz CL16 at 1.35V voltage.

Thanks to the high clock speed, the read and write speed of RAM is also very good, reaching nearly 50 GB / sec. A weakness of Ryzen is a slightly high delay. Hope AMD will soon have a way to improve. At Intel, this delay is only about 50 ns.

A small note is that the number of RAM modules configured to set up JEDEC RAM compatible with Ryzen in the market is quite limited. Therefore, to push the RAM clock up to the print level on the package, you will have to go into the BIOS to adjust your hands. If you use MSI motherboard like me, you will have the option of Memory Try It! with common configurations to choose from, making it easier to push RAM clock.

If you can trade the RGB LED for RAM compatibility completely on Ryzen, you can consider the Vengeance LPX AMD Ryzen series.

In conclusion, Corsair Vengeance RGB is a quality RAM kit with high performance, equipped with advanced and fashionable features such as RGB LED. Customizing the lights is also convenient through Corsair Link or motherboard manufacturer software. Warranty 1 change 1 is also a very interesting factor. If you intend to build a new machine configuration, regardless of whether it is AMD Ryzen or Intel Core, the Corsair Vengeance RGB will still be an extremely affordable option.