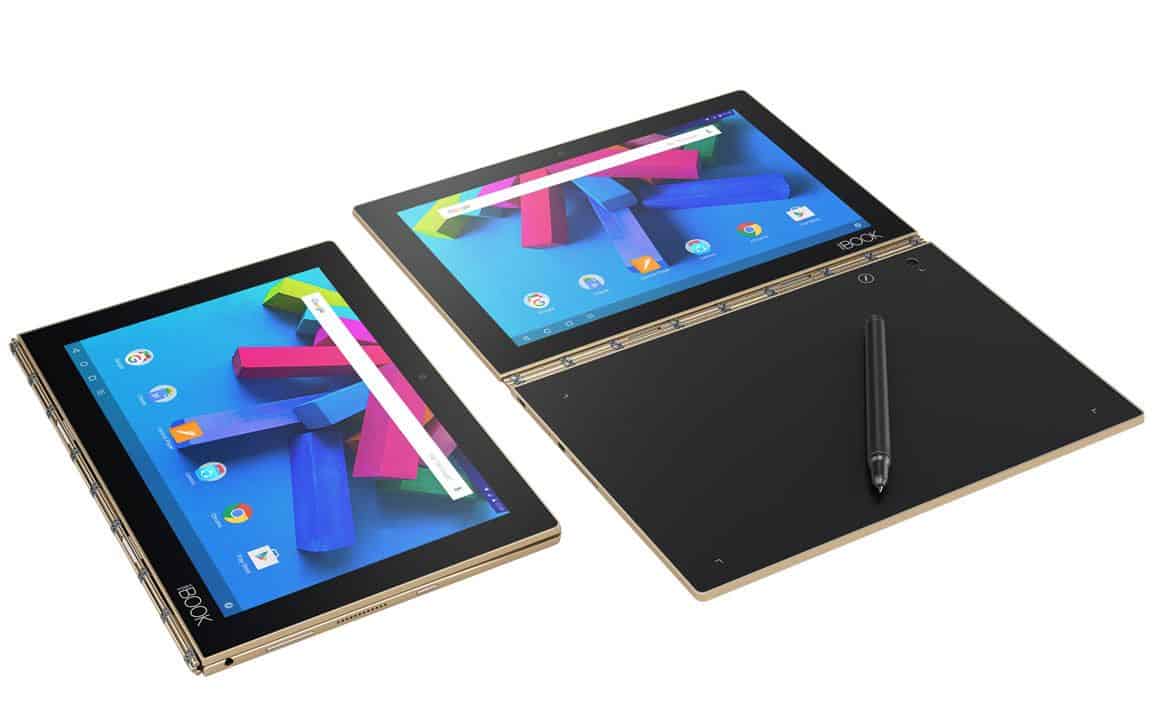 Lenovo Yoga Book looks like a laptop with two parts: touch screen and touch panel instead of conventional hard keyboard. The panel is an inductive surface, labeled Lenovo by the name “Create Pad”. This is integrated with the Wacom processor, which displays the “Halo Keyboard” touchpad and Touchpad. However, by pressing the switch button available on the panel, users can turn the Panel into a drawing board, which allows manipulation of touch with a finger and an electronic pen.

Intuitively, if you do not look closely it will be difficult to recognize Lenovo Yoga Book as a tablet or notebook. Lenovo Yoga Book is quite compact size when the machine measures three turns respectively, 256.6 x 9.6 x 170.8 mm and weighs 690g. This device has a shell made of Aluminum and Magnesium, multi-touch screen 10.1 inch, full resolution 1920×1200 pixel HD, using IPS LCD screen for good viewing angle, color eyes. The Lenovo Yoga Book has hinges that allow 360-degree swivels. This design creates the sophistication of this device: use it as a tablet, use the keyboard as a table top for a monitor or use it as a traditional laptop. Yoga Book can also turn a tablet look like a tablet after the keyboard folded.

The Lenovo Yoga Book has a number of connectivity ports, including a Micro USB charging port, an HDMI port, a microSD card slot, and a headphone jack. There will be no USB or USB Type-C ports. In addition to the US market, Yogabook has added support for the Sim slot.

Lenovo’s pen is a highlight of this product line, called Real Pen. Real Pen is shaped like the pen used in the workplace. Made of plastic coated with a glossy black paint. The pen consists of two distinct parts, the pen body and the pen cover. The pen weighs only 50 grams, about 18cm in length. With this design, the feeling is quite hand-held and grip on the handle when used. Another impressive feature of the Real Pen is that it does not need charging or battery usage.

The Yoga Book is unique, the design impresses the user and a relatively good configuration. Powered by quad-core Atom X5 Z8550 processors with 2.4 GHz clock speed, this processor is sufficiently powerful to run all applications that require high GPU processing without problem. Despite continuous use of multiple tasks in one day, there is no lag. Because the design is thin, the machine does not support any heat sink fan, but the machine is not too hot during use, an average of 35 – 38 degrees.

The 8500mAh battery is also an advantage when it comes to continuous use for more than 10 hours. Front and rear cameras are 2MP / 8MP, which is not the strength of Lenovo Yogabook.

The Lenovo Yogabook is available in two versions, one is using Android 6.0 Marshmallow or another with Windows 10. The advantage of the Android version is that it gives you more customization, variety of applications and entertainment than Windows 10. But can not say Microsoft operating system does not have good, Windows 10 for good hardware optimization and machine running smoothly.

After a period of experience and evaluation on the android version, found that Yogabook is not as powerful as the current flagship phones. With nearly 90,000 Antutu points and 22,000 GPUs, the device is expected to deliver good graphics performance and good multitasking capabilities (about 6,000 RAM). With GeekBench scores, 1136 single-point processing points show that the machine is quite good. Multitasking is great when it comes to the Nexus 6P or Samsung Galaxy S6. Yoga Book will satisfy most of the entertainment needs from simple to complex

Interface of the machine running Android version pure Google from the settings to the icon is relatively simple. The display interface looks more like a mobile device than a laptop. System applications will be placed underneath the screen like the taskbar on the laptop, allowing the display of multiple task pane modes.

where can you get a Lenovo Yoga Book online

Yoga Book is a tablet, of course, this device will certainly carry all the advantages of existing features of the tablet such as large screen, good sound, support multiple ports, .. But Lenovo Yoga Book also do more than that:

Because of the 360-degree adherence, the Lenovo Yoga allows users to change their shape to suit their needs such as tablets, screen panels, traditional laptops or a smart drawing board.

The Lenovo Yoga Book is used as a laptop, the matte black panel underneath turns into a glowing touchpad keyboard. At press any key, the device vibrates lightly, giving the best feeling to the user when using. However, to use the keyboard as a tool for editing Word / Excel / PowerPoint documents is difficult, users must familiarize themselves with the touch keyboard because it will lose the physical sense of typing each of the keys.

It is possible to select the switch button on the panel display to turn the touchpad into a Wacom drawing board. Users use the pen Real Pen to manipulate the touch screen without the need to use the hand as touching the screen. A nice operation, users can use RealPen draw directly on the screen

After buying the Lenovo Yoga Book, the same level of BookPad includes 15 sheets of paper available for purchase, users can put this BookPad on the touch panel (in drawing mode), users can use Real Pen to draw or write information on paper, the response time from the BookPad to the screen almost no latency.

The Yoga Book is not supported on Android 7.0 Nougat yet, but it still has the ability to display multiple tasks simultaneously (Windows 10 obviously still supports), which is useful for allowing users to interact on facebook, just watch youtube or surf the web at the same time on the screen.

Although the machine is only 9.6mm thin, the Lenovo Yoga Book is equipped with a very impressive battery capacity of 8500mAh.

Through this article, we can see that the Lenovo Yoga Book is a promising product that makes a difference in design and functionality. This product satisfies the functions of a tablet from design to the screen, excellent performance, will definitely give users a great experience when using.

– 3 in 1 functionality: tablet, laptop and drawing board.

– Halo Keyboard difficult to use

One thought on “Lenovo Yoga Book”