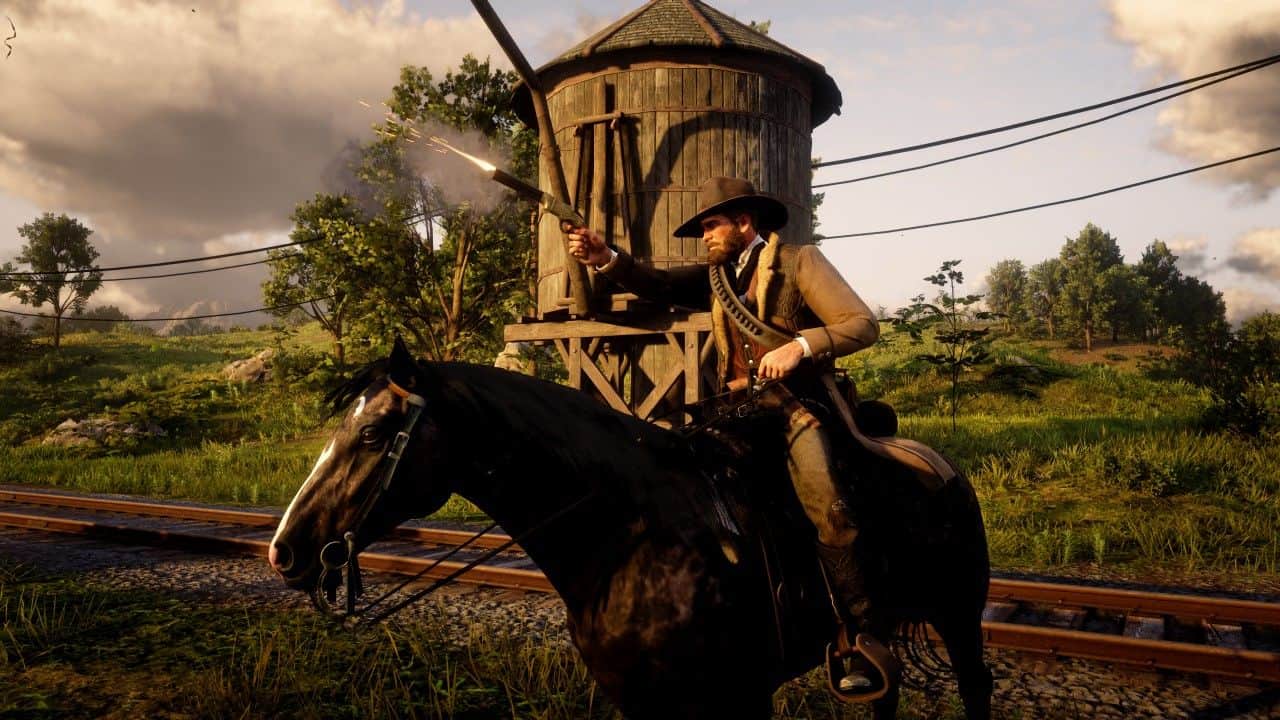 1899, the golden age of the illegal world raging gradually subsided. For the majority of American society, it’s a natural progression to contemporary civilization. For Van der Linde’s gang, it is the chains that prevent them from gaining freedom for themselves. They are criminals, outsiders in society, or just people who are pushed to the end, in pursuit of a prosperous future for themselves, and the community that they call family.

Between them is Arthur Morgan, who is said to prefer to use fists rather than words to solve the problem, is a man who is only 36 years old but has the voice of a sailor in his 80’s who has pneumonia. Every time he solved the problems related to banknotes printed with the portrait of the US president, he became violent and fierce.

Through Arthur, we witness the abyss of America’s borders. The treetops will then be cut down by every carpenter, factories will sprout up between the plains, covering the clouds with the black smoke of civilization, both literally and figuratively. From there, nature struggles in the struggle against humanity’s steel and order, just as Arthur’s family seeks a bright future in a world that no longer needs them – the people who are ready willing to show their true nature when they have nothing to lose.

It can be said that Arthur Morgan is the greatest achievement that Rockstar Games has achieved for Red Dead Redemption 2 PC. The diary that he will always fill with sketches of scenes, people and their fate seems to be a reminder, that amidst the tragedies, there is still faith, and the fortunes revolve.

Because as an immediate loop of cause and effect: bloodshed will only lead to bloodshed. Arthur is a wonderful character not because he was a mistake looking for forgiveness. He is the product of manipulations that always try to convince him that “loyalty is more important than everything”, and that blind loyalty is also the tomb of the blacks. Arthur may be foolish, but at the same time, he is also a true hero, because in the most important moments, he redeems his success by taking the bright future for those who deserve it take it.

Red Dead Redemption 2 PC’s 50-hour long story is full of drama, despite repeated scripting sequences and coherent storytelling, it is told in a confident tone collaborate with inspiring conversations. If Grand Theft Auto used sarcasm to express the human heart, Red Dead Redemption 2 PC did the same thing with a sincere attitude. Every sad note of sacrifice uttered the lyrics, that death is only meaningless when it does not lead to peace …

… and there will always be a place of refuge for those whose hearts of gold always exist like ghosts.

As mentioned above, Rockstar Games has the position of “too big to fail”, and that helps the studio dare to do things beyond the expectations of the fans without having to receive harsh reactions. In terms of content, Red Dead Redemption 2 PC is the most moving screenplay that Rockstar Games has ever written. In terms of gameplay, it is also a big change compared to its predecessor and Grand Theft Auto.

The first impression of anyone when setting foot on Red Dead Redemption 2 PC, that is it … slow, slow to unusual, slow enough to make anyone impatient also annoyed. Arthur moved slowly, heavily. Every small action like peeling an animal took place with tremendous meticulousness. You pick up each item … by hand, instead of the game automatically putting them into Arthur’s pocket every time you step over (except for ammunition). The act of viewing the catalogs of goods in the store is also performed by turning pages or looking at objects on the shelves. The game even allows you to close an open cupboard / closet, even though it doesn’t help the player – unless the player wants to make Arthur a polite gentleman?

This is the key of Red Dead Redemption 2 PC. In order to fully convey a western American country in the eyes of romanticization, Rockstar Games wants the world in the game to be authentic – and to achieve authenticity, it must be as detailed as possible. Red Dead Redemption 2 PC does not repeat the popular concepts that video games make use of in order not to frustrate players, because it wants players to slow down and enjoy the atmosphere manipulated by the developer.

That is why the world in Red Dead Redemption 2 PC is not only beautiful but also affects the players’ view of the situation and the environment that the game sets out. The most conspicuous feature, which is similar to Kingdom Come: Deliverance, once you get used to the routes you go through often, you will find where you need to go without having to glance at a map based on the landscape, routes and directions.

The act of “touching” each corpse to collect items is also deliberately slow – why would you want to spend 5 seconds just to get a bottle of wine and $ 5 coins, while you can spend precious time That price to rob a train? Red Dead Redemption 2 PC does not remove the “game” agile elements for fun, it makes it difficult to force players to deal with natural harshness, and absolutely does not serve comfort of the player in its world.

where can you get a Red Dead Redemption 2 online

The commitment to the slow pace makes the action sequences of the game become more intense. After the 20th stalking by a mercenary in Assassin’s Creed Odyssey, the writer began to yawn because the level of machines was too predictable in the way the mechanism worked. As for Red Dead Redemption 2 PC, a peaceful hunting trip may be interrupted by an ambush of the O’Driscoll gang in the forest – a situation predefined in the structure, but completely random in the the time it was presented.

The gameplay of Red Dead Redemption 2 PC, in general, does not require you to conquer the world in the game, but forces you to adapt to it. For the first time in history, a Rockstar Games game lets you respond to NPCs with courtesy instead of fists and middle fingers! Although the response is only divided into two options “friendly” and “rogue”, it is still enough for players to express themselves, exposed to human life in the period of half-turmoil and half civilization at that time, as well as shaping Arthur’s form.

Meeting strangers, helping those in need, bounty hunting, hunting, playing mahjong, fishing … are very common activities that we have encountered their variation in Grand Theft Auto, so far they once again adorn the vibrant world in Red Dead Redemption 2 PC. They do not need cheap bait like experience points or items named in purple to attract players. With Arthur, they only need to bring money or can exchange money. For players, they just need to be memorable, interesting, and help players immerse themselves into the sound of Red Dead Redemption 2 PC.

Although it is essentially a game about people who exist outside of their authority, Red Dead Redemption 2 PC is extremely interested in … forcing players to follow its intentions, according to the time it wants, in the manner that it requires. Defy it and the message “MISSION FAILURE” will hit the player’s face.

That message will appear like a meal if you are a creative type and like to play games in your style. A common mission in Red Dead Redemption 2 PC takes place following the motif of riding a horse to the location -> watching cutscenes -> ending with a gun battle. In a gun battle, if you try to hook an enemy tire, the mission will fail because you abandoned your teammates. If you do not defeat all enemies or rush forward and catch the enemy, your teammates will immediately be shot down and the mission will fail. If you do not lean back in the position required by the game, the game will not continue. If you drop a corpse in bush B instead of bush A, the game will not continue until you drop it in bush A.

Have you seen the issue of Red Dead Redemption 2 PC? Despite its nature as an open world game that allows the player to handle the situation on their own, it completely forces the player to play by its rules in the main storyline sequence, and you are not allowed to breaking that rule is only a step away from the main road. The priority for content tempo ensures that the flow of the story of Red Dead Redemption 2 PC goes smoothly, but it’s worth it when that priority unduly affects the gameplay, as well as going against the principle “Freedom” that the world in the game set?

This is 2019, not 2013. Grand Theft Auto may be the norm of the open world game genre, but after the Legend of Zelda: Breath of the Wild, Metal Gear Solid V or Watch Dogs 2, it’s hard to accept the mission design style of Red Dead Redemption 2 PC’s “do not look at the radar, do not attempt to continue” method.

Finally, can someone explain what the hell is going on with the control mechanism of Red Dead Redemption 2 PC?

The buttons E, Q, R, F are the main interaction buttons, but their use is entirely attributed to the game … arbitrary. Most of the time you’ll hold the R button, which will pick up a pack of cigarettes or a bottle of wine, but sometimes you’ll hit the E button to get a special item. If you want to pick up a gun, you have to press the Tab button, not the R or E – and the most insane is that the Tab is assigned to pull out / put the gun. The most annoying point the writer wants is to leave the map, you have to press the F button – instead of Esc.

The idea of Rockstar Games is to avoid assigning too many functions to a button, but in the end, the controls in Red Dead Redemption 2 PC are just a bit better than a port game version of JRPG.