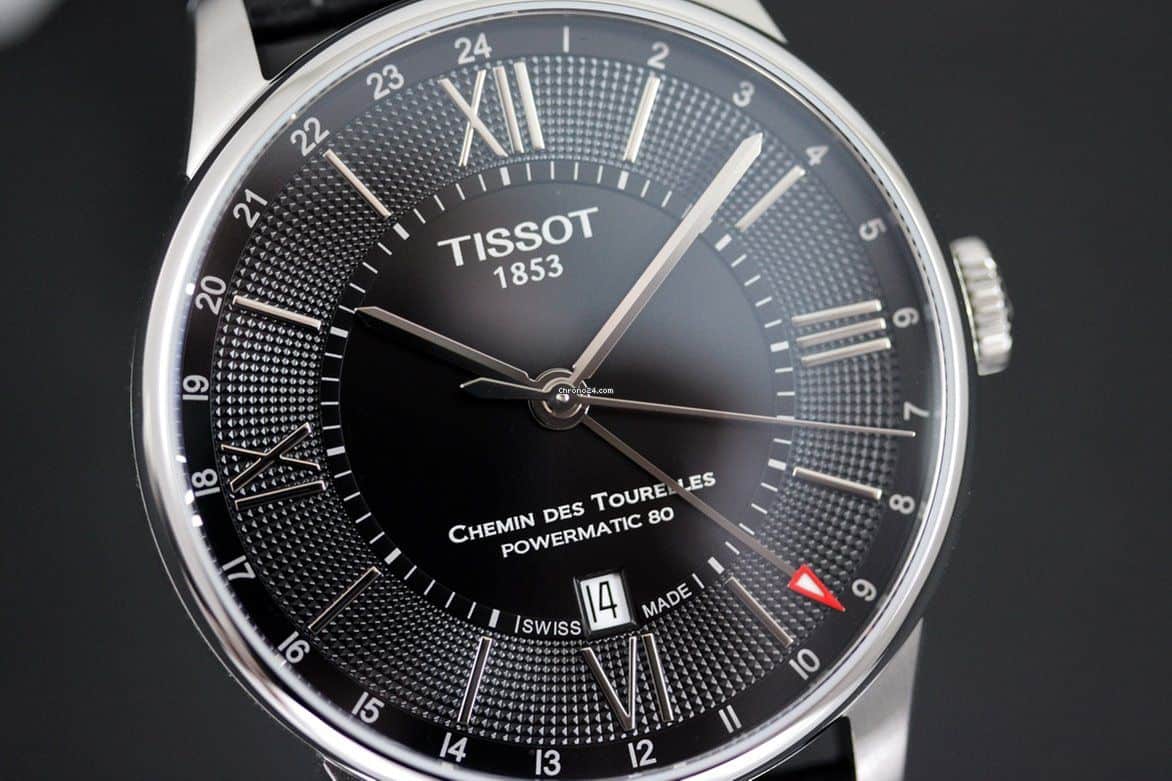 A few years ago, watch lovers were still eager to watch Chemin Des Tourelles watches featuring vivid guilloche patterns with a combination of a new trend – Powermatic 80. Based on designs , that standard machine, Tissot has developed new GMT models. In it, a watch Chemin Des Tourelles black leather strap, black face T099407.16.058.00 was chosen by the company to become a new GMT design with almost original design and addition that GMT feature – T099.429.16.058.00 with changes in size.

In terms of dial design, you can still see almost everything that has made Chemin des Tourelles successful in recent years. It is a design with strong, tough lines and traditional classic as the name associated with the street where the factory of Tissot was built in 1907. After Le Locle, this is the product set The most characteristic for this Swiss manufacturer.

The two versions all use pencil of large size to perfect the shiny, catch the light very well and the Dial form of the Sector is divided into 2 parts. The finished center is slightly rough as the base for the needle while the fringe is meticulously carved with the guilloche clous des Paris. This is a unique design that is not easy to catch in other brands or product lines. Located in the central layout of the watch is still a set of numbers that combine the 4 Roman characters as a 4-corner accent and simple number lines at the sub-positions. The date calendar will still be integrated at 6 o’clock angle to create the absolute need and even the words “Chemin Des Tourelles Powermatic 80” will remain the same font for color and expression.

Still opting for black leather like the previous version, but the GMT model is still more striking and more polished.

Although the design is almost identical to that of the standard model, the Chemin Des Tourelles model creates a more unique, unique and more nuanced nuance through the way of displaying the GMT feature on the meter. With this feature, the clock pattern will indicate the time in two countries at the same time. This is especially important for people who often have to move between different countries like businessmen or politicians. For them, a traditional Dress Watch 3 will be a bit inconvenient, but a GMT model will be great while maintaining the simplicity and elegance and still meeting the need to watch the time. Through the Chapter Ring consisting of 24 Arab numbers corresponding to 24 time zones and a GMT needle with a red arrow makes the watch dial more attractive.

In terms of size, the GMT version is quite similar to the standard version. We still have a circular watch with a 42mm diameter with a shiny, ultra-thin bezel. However, the GMT model will be a bit thicker. Specifically 12.5mm compared to the standard 10.9 mm. In addition, these two models all share the same type of cord and lock type.

If the standard Chemin Des Tourelles is operated by the Powermatic 80.111, it can store up to 80 hours and only set the time, hour, minute and day view, the GMT model has been set fine-tuning into the Powermatic 80.661 still ensures a long 80-hour storage time with basic features.

What is special about the Powermatic 80.661 generation is the addition of the GMT feature by adding 2 more glasses, needles and other parts. And that is also the reason why the version has a higher thickness than the previous version.