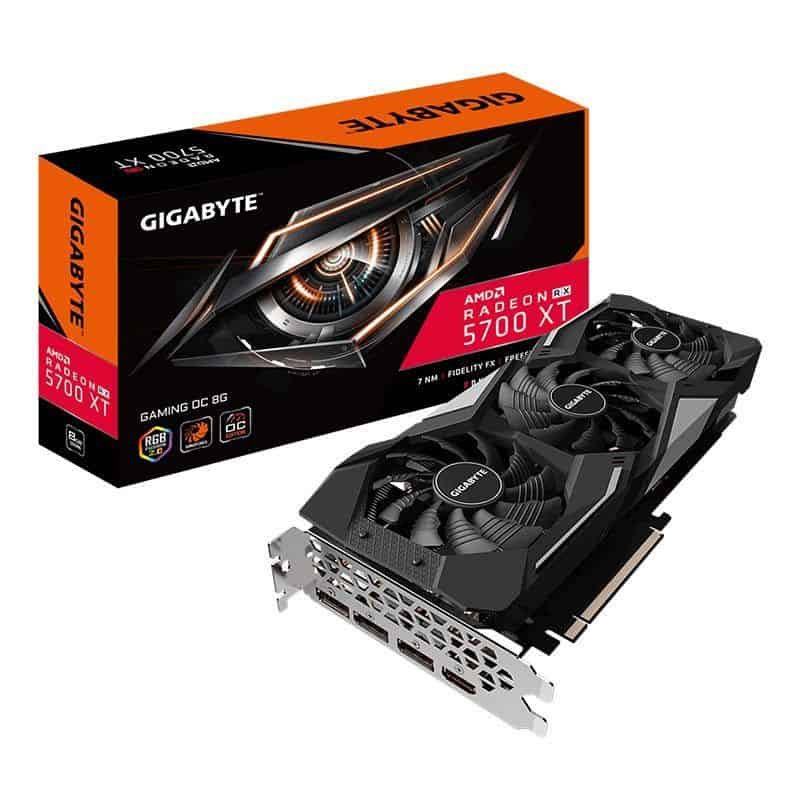 After fully exploiting Graphic Core Next (GCN) architecture in a series of recent products, AMD has released a new RDNA architecture with better performance than the previous generation on the world’s first 7nm technology line.

That’s why right from the launch, the RX 5700 XT GPUs have knocked out mid-range high-end graphics cards from NVIDIA, the RTX 2070, and even forced these cards to “retire”, Making room for RTX Super series graphics cards that greatly enhance the power.

When armed with the AORUS RX 5700 XT 8G, Gigabyte made some significant adjustments such as raising the base clock to 1770MHz compared to only 1605MHz on the reference version, Meanwhile, the Game Boost clock even reaches 1905MHz, far beyond the 1755MHz of the reference version.

With this power, the product easily achieved a score of 21,675 points in the 3DMark FireStrike test, slightly better than the score of 21,123 points on the reference AMD RX 5700 XT.

Meanwhile, in the 3DMark Time Spy test that allows DirectX12 rendering, the system achieved 8,742 points with an increase of approximately 5% compared to 8,464 points of the reference version.

In most actual game tests, the AORUS RX 5700 XT 8G has a marginally smaller level than the reference version of 3% to 5% depending on the game.

In particular, the game has an open environment and a complex number of characters such as Assasin’s Creed Odyssey or Shadow of the Tomb Raider, the difference between the two versions is quite clear due to the difference in the core.

Meanwhile, with the game “waste” a lot of RAM as Total War: Three Kingdoms, almost no noticeable change in the average speed between the two versions.

Overall, the power of the AORUS RX 5700 XT 8G once again deserves to be confirmed in the mid-high-end graphics card segment when it is able to “swallow” almost all today’s heavy games with high settings and the “smoothest” speed.

The most worrisome thing on the RX 5700 XT graphics cards is still the thermal problem, and with the AORUS RX 5700 XT 8G, Gigabyte has somewhat overcome this problem.

Despite its appearance quite similar to the Gaming OC version, the entire heat sink equipped with the AORUS series is still more recognizable thanks to its larger size, thicker, and significantly heavier, thus but the stress test temperature with the FurMark program only “stopped” at 76 degrees Celsius.

This is still relatively high, but still within an acceptable range, much cooler than the OC Gaming series’s 85 degrees Celsius temperature and over 95 degrees Celsius on the reference version.

Another plus point is that the AORUS RX 5700 XT 8G has quite a lot more ports than the reference OC Gaming or reference, enough to “appear” for 6 monitors at once, exploiting the maximum power of the “AMD” Eyefinity feature, which is extremely convenient for today’s “strategic angles” of multiple monitors and is suitable for many different uses at the same time.

Despite the name “AORUS”, Gigabyte’s high-end gaming product line, the AORUS RX 5700 XT 8G is quite confusing when it almost inherits the design of the “more popular” product line than a lot of lines Gaming OC products.

It must be said that in nearly the past 2 years, the AORUS product line has had an “makeover” step by step when it owns the best design of the high-end graphics card product line for gamers on the market today, surpassing both the Strix product line of ASUS or Gaming Z product line from MSI “dragon team”.

But the design of the AORUS RX 5700 XT 8G “based on” on the Gaming OC product line proved too … “trivial”, not to mention the radiator was further thickened to increase the area exposed to the wind, making the product thick and heavy no less than the popular MSI Gaming X Trio RTX 2080 product line, occupying a lot of space inside of the machine.

However, this can only be considered a small problem, too familiar to the professional gamers or high-end PC players, when the high-end products of the brands are designed with a 3.5x size compared to the standard PCI Express slot size.

According to the subjective opinion of the writer, this design is completely not beautiful, not “bright” as the current AORUS design, and therefore, for those who like to “show” their PC, it is absolutely worth it. additional considerations.