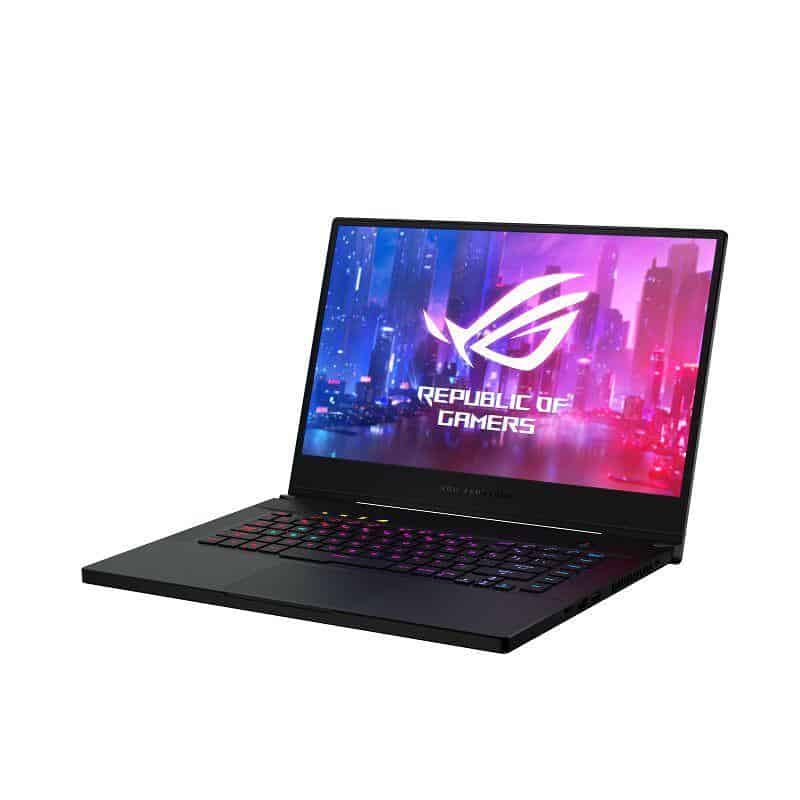 Over the past few years, ASUS has focused a lot on designing and improving manufacturing capabilities, which makes even less expensive laptops like Vivobook models, such as the Asus Vivobook A512DA EJ418T version which Biareview has introduced recently have good design and processing.

For a mid-range – high-end product like the ASUS Zephyrus M GU502GU, the design and manufacturing quality is “cool” and easy to please even the most demanding users.

Overall, the latest version of the Zephyrus M series remains the same design from the first Zephyrus versions with a completely brushed aluminum exterior with a high level of finish.

The version that I receives uses a blue tone, owns a silver-plated ROG logo that can glow when plugged in looks quite simple, the two sides are square design without being tapered to “cheat” on as thin as the current ultra-thin laptops, while the back of the machine is precisely processed with many air vents and heat sinks with precision machining quality.

The ASUS Zephyrus M GU502GU hinge is quite light, very easy to open with one hand and the inside is well arranged, and it still uses aluminum material for the surface, unfortunately, the keyboard is still used. Using conventional keystrokes, there is no special type of key as on high-end laptop versions.

Similar to the previous versions, the new version of Zephyrus M is still equipped with a 15-inch screen with three thin edges rather than the four-sided version as on the new models today but the ratio of the display to the frame is not really impressive.

This also leads to the size of the device remains the same as the previous generation, still only equivalent to the 14-inch models on machines with thick screen edges, but can not “squeeze” the size down the equal 13-inch laptops such as the newly launched ASUS Zenbook 15 UX534FT.

It must also be added that the model equipped with ASUS Zephyrus M GU502GU is the most advanced version available today, both meeting high speeds of up to 240Hz for advanced gamers and possessing the ability to display. Good color, meet Pantone printing color calibration standard from in-house factory.

This makes our powerful laptop not only acts as a “sharp weapon” for gamers.

Besides, the heat dissipation ability of the laptop is also quite good. The system only reaches 73 degrees Celsius in the Performence fan operating mode, and if users withstand the noise to turn the fan to Turbo mode, the system temperature can also be “pulled” to a level below 70 degrees Celsius.

In basic mode, the system can achieve a score of 3DMark FireStrike 11,147 with 14,834 points Graphic, while, coming to the 3DMark Time Spy test on the DirectX12 graphics platform, the system achieved 5,264 points.

This result is even slightly lower for desktop systems using GTX 1660 Super graphics card, such as ASUS GTX 1660 Super TUF Gaming X3 version can even reach 14,786 3DMark FireStrike points, this is also It is only natural that graphics cards for laptops are usually weaker than the desktop version.

If compared, this result is equivalent to a desktop system using Intel Core i7 8700 processor and NVIDIA GTX 1660 graphics card, which can also be considered quite strong for most gaming needs and working now.

Tested with some heavy games today, ASUS Zephyrus M GU502GU gave very good results in most tests, such as in the Assasin’s Creed Odyssey game, the system achieved an average speed of 43fps with a few The segment was dragged down to 25fps.

Meanwhile, with a number of other game tests, the system achieved an average speed of up to 87fps in Ultra settings on the Battlefield V game, while it was quite strange in relatively “old” games like Batman Arkham Knight it only reached an average of 66fps.

The other two games that “consume” quite a lot of graphics RAM are Total War: Three Kingdoms and Total War: Warhammer 2, which achieved 39fps and 53fps respectively, showing that the 6GB of GDDR6 RAM on the GTX 1660 Ti graphics card works well.

Another factor that makes the game experience smoother, from the ultra-high-speed scanning screen up to 240Hz, although according to me, this speed does not make too much difference compared to previous 144Hz monitors, but it offers a smoother gaming experience than conventional 60Hz monitors, especially for action games that require quick reflexes.

Overall, the power of the ASUS Zephyrus M GU502GU in the mid-high-end segment is quite impressive, enough to satisfy the “heavy” gaming needs of most gamers today, or afford to serve good working needs of professional users on the move.

As a mid-to-high-end laptop, ASUS Zephyrus M GU502GU has played a very good role in terms of design and processing power, but there are still two outstanding issues as a user not really satisfied as expected.

ASUS mid-high-end laptops still have a familiar problem with laptops made of metal casing, which is the “too good” thermal conductivity of this material makes the keyboard become hot quickly , annoying if users play the game for a long time.

The second problem with the ASUS Zephyrus M GU502GU comes from the relatively modest battery life of the product. Although this is understandable when the device owns a pretty strong configuration, but the actual usage time is quite far from the “announced” by the company.

The ASUS-equipped 76Wh Li-ion battery pack is claimed to be capable of feeding up to 6 hours for normal light tasks, but on actual testing, the use time was only about 3 hours 45 minutes, only 60% of the manufacturer’s announcement.

With poor battery life, users must carry the power adapter with them when they need to be “mobile” all day. The only thing “comfort” is that ASUS also equips you with a mini charger to “lighten” on the move instead of a large 120W power adapter for gaming and heavy work normally.

where can you get a ASUS Zephyrus M GU502GU online