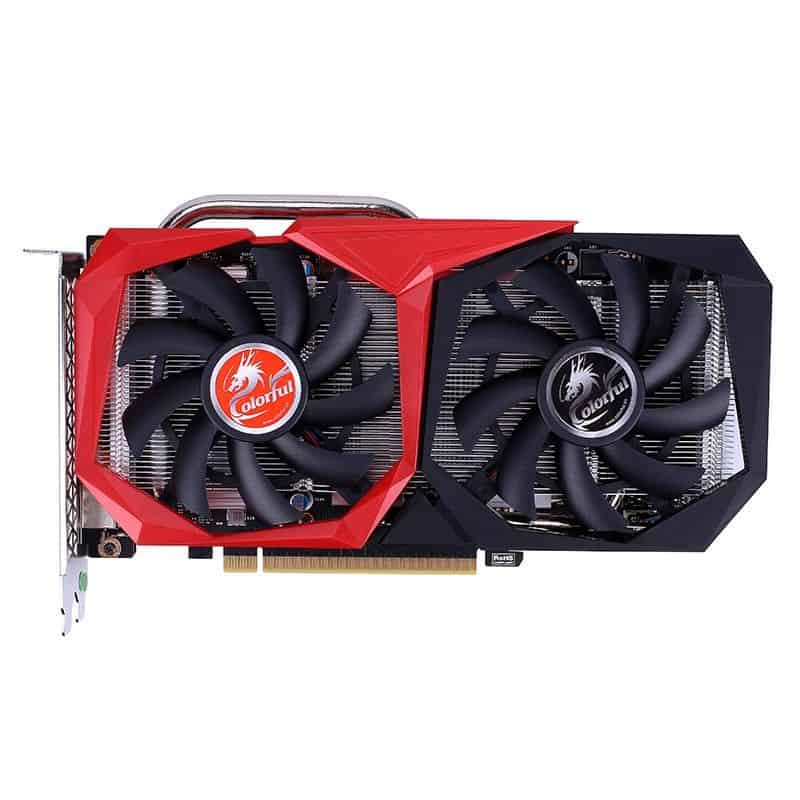 Colorful GTX 1660 Super NB’s box impresses with the eye-catching battle ax in the middle of the box, and the rest does not have much difference with other normal product boxes. Like the RTX 2060, Colorful continues not to let large images of product renderings on the front of the box, making it easier for customers to ignore the product.

Around the box are information about the outstanding technology available on the product, along with the requirements for configuration, power, Windows version, … With GTX 1660 Super, manufacturers recommend minimum power source 450W with an 8-pin one-side auxiliary power, in addition nothing special.

Overall, the Colorful GTX 1660 Super NB has a basic design with two 9mm cooling fans, which will occupy two PCIe slots as usual. Like the GTX 1660 NB, the mask of the GTX 1660 Super continues to be a balance between two red-black tones, which reminds me of MSI GamingX products from GTX 1060 and earlier.

Like other brothers in the Battle Ax line, Colorful GTX 1660 Super continues to stick with the heat sink system with three large heat pipes.

Backplate is no longer an “exclusive” feature of flagship products, as many manufacturers have equipped them with the GTX 16 series, and Colorful is no exception. The backplate design of the GTX 1660 Super NB is quite pitiful, bold gamer, but maybe it is intended to decorate and protect the card rather than the heat sink, because on this backplate there is no exhaust vein like the card model other graphics.

In terms of ports, Colorful GTX 1660 Super NB is only equipped with three standard ports including an HDMI 2.0b, a DisplayPort 1.4 and an old DVI port. Notably, this version has also been “cut” of the automatic overclocking button (overclock) compared to the more expensive versions of Colorful, but you can still manually overclock with iGameZone II software.

iGameZone II has all you need to overclock the card, but the interface is still a bit colorful. Three preset profiles, Game, Silent and Turbo, only slightly increase the Core Clock but not go into other parameters.

The cooling capacity of Colorful GTX 1660 Super NB is better than I expected. In the test room temperature at 28 degrees Celsius, the temperature in the case (closed) fluctuates within about 35 degrees, when pressing the maximum load card with the Furmark tool, Colorful GTX 1660 Super NB has never exceeded 60 degrees. However, this card does not have a built-in Zero RPM feature that automatically shuts off the fan at low temperatures, so the idle noise will be higher than other products on the market that have Zero RPM integrated.

In terms of power consumption, monitored by the GPU-Z software, we found the Colorful GTX 1660 Super NB consumes about 32W when in sleep mode. When pressing the full load card with the Furmark tool at 2K resolution, the power consumption also increased to just over 60W. In percentage terms, the displayed 49% corresponds to the manufacturer’s TDP 125W.

While Nvidia has claimed the arrival of the GTX 1660 Super is not to replace any GTX 16 series card but instead fill in the gaps, its performance proved the opposite. Having the same price as the new GTX 1660 when launched, but the performance is slightly better than the most powerful GTX 1660 on the market, obviously you have no reason not to choose the GTX 1660 Super if upgrading from the lower card generations.

As for the Colorful GTX 1660 Super NB, this is a graphics card that suits the needs of the majority of gamers today: 60 fps with AAA games and 144Hz with eSport games. No custom LEDs, no automatic overclocking buttons and no Zero RPM feature are unfortunate cuts, but in return the card’s overclocking capabilities are fine with a non-OC card, and the price of $300 is an attractive figure for gamers who only care about “p / p”, or performance on price.

– P/p, or performance on a good price

– Good overclocking with an OC-free card

where can you get a COLORFUL GTX 1660 SUPER NB online