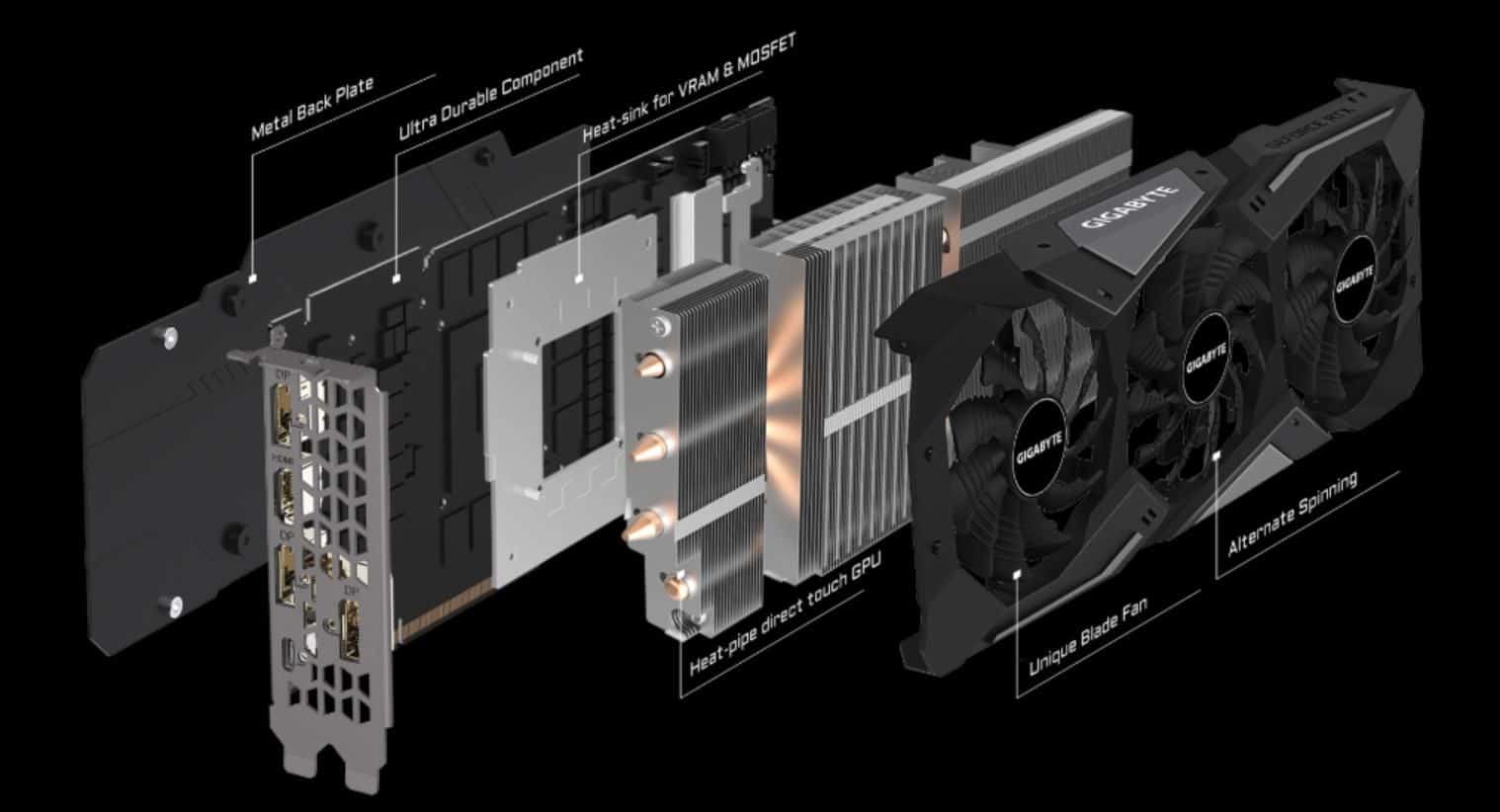 If you are a regular reader of the technology category on Biareview, then surely you know the Gigabyte GTX 1650 Gaming OC 4G version with a familiar two-fan design throughout two generations of graphics cards of Gigabyte recently. In fact, this design tends to be more efficient than aesthetics and with the review of the writer, the company’s graphics cards use this design somewhat “aluminum plastic” and not really beautiful It was not until the release of the second version (Revision 2.0) of the recent RTX 2060 graphics card that Gigabyte used the WindForce 3 design again that these expensive products seemed to be “good” in terms of appearance.

Of course, it is also very satisfactory with this design, so the company has equipped Gigabyte RTX 2060 Super Gaming OC 8G with WindForce 3 radiator fan with a stricter design, the radiator fan is also slightly smaller. Die-cast aluminum “cast” radiators in the center of the card, highlighting the loose fins and copper-colored heat pipes make the product look much more solid.

In fact, with a powerful, overclocked processor chip and a lot more heat than the previous generation, even with a low profile WindForce 3 cooling fan, the number of heat pipes is as low as the Gigabyte RTX. 2060 Super Gaming OC 8G, when operating at full capacity for a long time, is still somewhat exhausting, but still quite good for casual gaming and work.

Experimenting with the famous Furmark stress test tool, all three radiators are almost immediately “accelerated” to high speed, followed by a slow rise in temperature for the first 10 minutes before stabilizing. However, this may not be the real capacity of the WindForce 3 cooling system when all 3 fans are not operating at full capacity, still very smooth and without howls light. This seems like Gigabyte is deliberately putting the fan speed at a quiet priority rather than prioritizing to reduce the temperature of the card. In realistic gaming conditions, the temperature is not pulled up to “hot” as during the stress test, only stable at 80 degrees C.

Overall, when launching the RTX Super product line, NVIDIA did not intend to “kill” the RTX 2060 product line as it did with the RTX 2070 series, but developed RTX 2060 Super as a slight upgrade. of this card with a slightly higher price. That’s why many gamers expect Gigabyte RTX 2060 Super Gaming OC 8G to be powerful enough to replace an expensive RTX 2070. In fact, the obtained test results show that the product partially satisfies this expectation.

In the 3DMark FireStrike test that allowed for normal rendering, the product reached 19,282 points, about 13% more powerful than the old RTX 2060’s 17,079, and even slightly above the 18,711 point of RTX 2070. Meanwhile, At the 3DMark Time Spy test at DirectX12 rendering, the product proved extremely powerful when it reached 8,708 points, slightly higher than the 8,186 points of RTX 2070. This is reflected in traditional game tests. Gigabyte RTX 2060 Super Gaming OC 8G can really replace “scandalous seniors”.

Experimenting with current games, the results of the Gigabyte RTX 2060 Super Gaming OC 8G show that the product can replace RTX 2070 in all of the current popular game tests at the highest setting.

Although still a bit inferior to the RTX 2070 in terms of number of CUDA processors (only 2176 compared to 2304 on RTX 2070), the new RTX 2060 Super processor has an advantage at Gigabyte. Overclocked available up to 1815MHz compared to 1650MHz on the Founders Edition version produced by NVIDIA. It’s also quite understandable because of the high-speed operation that the product gets hotter, but still within the acceptable limits of WindForce 3 heat sinks, which can be seen as a plus in terms of power, when The Gigabyte RTX 2060 Super Gaming OC 8G has a much lower price than the RTX 2070 versions.

Although Gigabyte RTX 2060 Super Gaming OC 8G has a “sweet” price compared to RTX 2070 versions, with the price reduction of regular RTX 2060 versions, buyers will have to consider whether to spend Up to nearly 30% of the cost to recover is only about 15% of the increase in power or not? And not to mention another product that is also “blocking” in the middle segment – the high-end has just appeared as RTX 2070 Super.

The last problem that Gigabyte RTX 2060 Super Gaming OC 8G faces is the stability of the new driver is not guaranteed. During the test of the game, the writer discovered the phenomenon of sudden upsets in the two experimental games. In particular, Batman Arkham Knight is still able to “compensate” for the “footsteps” with “speeding” stages, Warhammer 2: Total War has been dragged back to the average speed of the test, causing resulting in a decline compared to the previous RTX 2070 version. Hope NVIDIA will be able to improve this situation in upcoming driver updates.