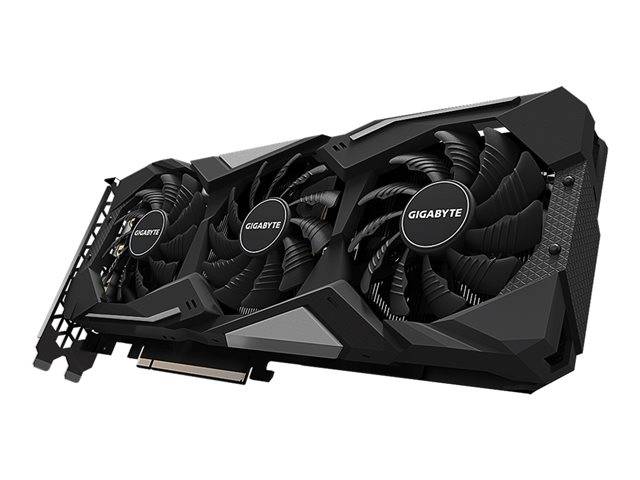 Gigabyte RX 5500 XT Gaming OC 8G – Although AMD’s mid-range RX 5500 GPU has introduced a long time ago, when it first appeared on the market, instead of receiving a series of reference versions (reference) as usual, the companies “bombard” users with the “luxurious” custom versions with all eye-catching designs.

Launched with the name Gigabyte RX 5500 XT Gaming OC 8G that will promise to make a difference compared to the version with only 4GB of normal memory, enough to “burden” heavy games in the device. The highest setting on the background of 1080p Full-HD resolution is popular today.

Does this version have enough “quality” to Gigabyte can “spread” in the segment?

In the products that Gigabyte launched today, it is normal for the Gaming OC version to play a leading role, representing the company under this familiar “brand”, “giving way” to the high-end segment for AORUS series products.

But with a few “rumors” recently said the company will continue to launch the EAGLE brand with “coverage” on all product models from low to high, this is likely to “rock” the session. Gaming OC version to the position of “popular” product to replace the normal version of WindForce has proved to be outdated.

Scattered a little about the “positioning” of this product line to see that Gigabyte RX 5500 XT Gaming OC 8G is no longer the “flagship” product line of the company, despite its WindForce thermal design with three cooling fans. The heat looks “bulky”, but the radiator only has two heat pipes.

The biggest highlight of the product is that Gigabyte has used the RX 5500 XT graphics processor configuration in combination with up to 8GB of high-speed GDDR6 graphics memory, paving the way for products with many processing capabilities. The device also has a powerful processor, not to mention the original clock speed is also pushed to 1685MHz compared to 1607MHz of the reference version, significantly increasing the processing power of the product compared to other versions.

This level is quite high, but still lost a bit compared to the version using the same graphics chip but has less RAM than Sapphire Pulse RX 5500 XT 4G with 12,374 points.

Meanwhile, when coming to the 3DMark Time Spy test in DirectX12 rendering, all three products seemed to be on par with when Gigabyte RX 5500 XT Gaming OC 8G reached 5,052 points, while the product came from Sapphire Tech reached 5,065 points and the “opponent” from the blue team GTX 1650 Super reached 4,925 points.

But when entering the actual game test, Gigabyte RX 5500 XT Gaming OC 8G proved to be superior to the version with 4GB of RAM and rival GTX 1650 Super thanks to its “abundant” RAM.

The most noticeable is that the heavy RAM-consuming games like Assasin’s Creed Odyssey, or Total War: Three Kingdoms, the product outperforms both of the objects compared.

Particularly with the game Shadow of the Tomb Raider, Gigabyte RX 5500 XT Gaming OC 8G extremely excellent when overcoming the weaker “trend” of the 4GB version thanks to the spectacular “breakthrough” in the third test in the lips. The open field has many objects, pushing the overall result of the product to the opponent GTX 1650 Super which has many advantages in this test.

Equipped with up to 8GB of VRAM GDDR6, you’ll have more “space” to play games in higher-end graphics settings, requiring more VRAM.

For example, with Gears 5, the normal tests that Biareview uses are usually set to High because this setting only “occupies” about 3.68GB of VRAM in complex scenes, while, if pushed up to Ultra settings, the game can “consume” up to 4.32GB VRAM in some scenes, this can cause “VRAM overflow”, unexpected frame drops when used with graphics cards with low VRAM.

Overall, the Gigabyte RX 5500 XT Gaming OC 8G has proved to be a formidable product in the mid-range graphics card segment, able to “weigh” most of today’s heavy games at Full-HD resolution, and also the absolute dominant product in the amount of VRAM so that users can reach the highest settings.

With tests to this day, it can be said that the RX 5500 XT is a very hot graphics processor, and cooling it is both a problem and a challenge for any. Which graphics card maker is available today?

In the previous tests of Sapphire Pulse RX 5500 XT 4G, the writer had encountered the temperature being pushed up to 94 degrees Celsius in stress tests with Furmark or “plowing the game” for hours, then himself. The BIOS of the card must lower the processor core to lower the temperature while causing “stutters” that seriously affect the game experience.

Products from Gigabyte are fortunate not to suffer from the same pulse reduction, but the heat issue is definitely a headache for users.

Despite the fact that up to three “cooling” fans, the heatsink only has two Gigabyte RX 5500 XT Gaming OC 8G heatpipes, which cannot withstand the heat from graphics processing chips, so when stressed Test by Furmark or heavy gaming for a long time, all three cooling fans are operating at full capacity with typical howling, similar to Gigabyte RTX 2080 Super Gaming OC 8G that the team sent to you to review the previous review.

In these tests, the whole card temperature even climbed up to 96 degrees Celsius, but due to the better PCB board design and components, the cooling design for both RAM and MOSFETs instead of focusing only on chips like products of Sapphire Tech, so the card still “withstands” at this temperature without having to reduce the pulse to maintain the temperature.