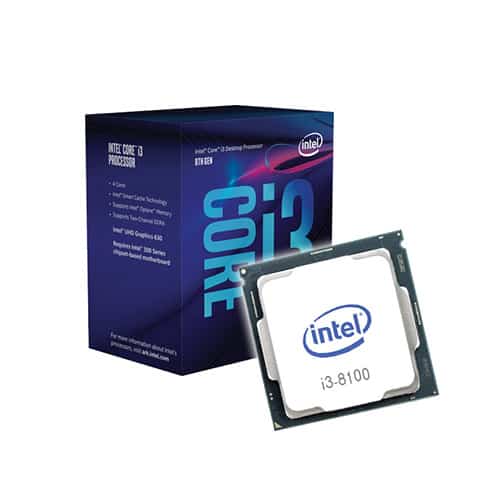 It can be said that Coffee Lake is a platform that brings many architectural improvements on Intel’s CPUs since the breakthroughs from Lynnfield and Sandy Bridge in the past, with all CPUs being upgraded. Significantly in the number of cores and threads. Typically, the i7-8700K, i5-8600K / 8400 have quite good performance and price compared to AMD’s competitors Ryzen 7 1800X / 1700, Ryzen 5 1600X / 1500X / 1400, meanwhile In the mass segment, Intel takes the i3 8100 core to compete directly with AMD’s Ryzen 3.

Will Core i3-8100 help Intel regain its mass-market segment that has recently lost its upper hand by AMD? This article will generally evaluate the performance of the Core i3-8100 to help you get a more accurate answer.

In this article, the systems used to compare the performance between Core i3 8100 and the popular segment CPUs include:

Along with the GTX 1080 video card, Windows 10 operating system with the latest updates and drivers and all games are set to the highest setting on 1080p resolution.

Ashes of the Singularity (AotS)

Something quite simple on the Middle-earth: Shadow of Mordor game, when the top effect belongs to the i3 7350K, even the Core i3 8100 and i3 8350K also give better performance with the i5-8400, showing the title. Shadow of Mordor game relies on quite a lot of CPU’s single-core processing and clocking capabilities, but the Core i3 8100 still has better performance with the i3 7100 despite having a lower clock rate. It was followed by the Ryzen CPU with the results that did not deviate too much from Intel’s CPU, with the Ryzen 3 1200 having the lowest performance, however all-day, the frame rate this CPU still hit at 124FPS.

Rise of the Tomb Raider

Rise of the Tomb Raider can be said to be one of the titles that favor Ryzen CPUs, helping to shorten the gap between Intel and AMD. However, the Core i3 8100 once again affirms its position in the segment with the performance consistently outperforming the Ryzen CPUs, although even with the Ryzen 5 1400’s performance at the bottom of the table, frame rates still achieved at 118FPS.

Thus, through a series of tests, it can be seen that the results are quite decisive when the i3-8100 continuously wins over the Ryzen 3 CPU series, even Ryzen 5 in the gaming. As for Kaby Lake, the Core i3 8100 also brings obvious improvements over its elder generation, the i3 7100, even with the i5-7400, all thanks to the 14nm architecture improvement with the addition of processor cores on Intel’s Coffee Lake platform. However, if you have the need to use applications, multitasking requires high capabilities from processor threads, then Ryzen 5 is still an option with a pretty good price at the moment with the ability to play a good game.

It’s really hard to think of the downsides of the i3 8100 core, the only thing that can be considered the downside here is that this CPU doesn’t support Intel’s Turbo boost feature so the clock speed will always be is locked at 3.6Ghz default. Also, if you want to find an overclockable CPU from Intel for a fairly soft price, perhaps the i3 8350K would be a more affordable option with a pretty good overclocking capability. But if you are simply an ordinary user, looking for a CPU with good general performance and a low price, the i3 8100 is sure to be the first choice in this segment.

Hopefully, this article will help you have a more intuitive view of the i3 8100’s performance as well as the choice of a CPU like that becomes easier.