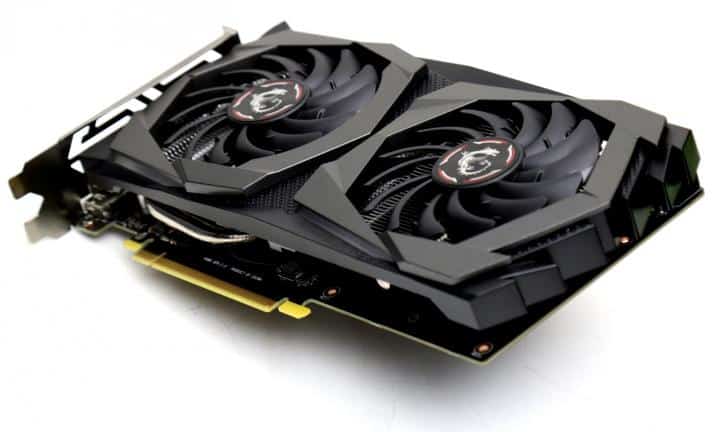 In the graphics card segment in the mainstream segment, a recent trend has been quite strange when leading manufacturers of computer components today let low-end versions “battle” rather than let Premium versions.

Although ASUS recently started offering “mini” Strix products to fill the void left in this segment, it can be said that the MSI GTX 1650 Super Gaming X is still the top high-end luxury option in the group of GTX 1650 Super graphics cards.

Therefore, the design of the product can be considered superior compared to many other competitors with the TwinFrozr 7 dual cooling with two large propellers, decorative RGB LEDs along the front of the product and backlight for the MSI dragon logo on the top.

With so many “lights” and “spare”, it can be said that this product is suitable for “taste” for all gamers and users who love the “colorful” style in recent years, and also a rare choice among rare mid-range graphics cards with such eye-catching design.

Almost MSI GTX 1650 Super Gaming X is not much different from the “elder” MSI RTX 2060 Super Gaming X that Biareview has introduced to readers, except the thickness is a bit “thinner” and not own “back armor” but the style often found on high-end graphics cards.

In fact, this detail in the mid- and upper-end cards hardly carries any actual value in terms of “supporting” the PCB board due to the heat sinks used on these cards relatively small ruler.

Equipped with a large heatsink fan like the 7th Generation TwinFrozr, the cooling capabilities for the GTX 1650 Super graphics processor on the product are almost nothing to worry about.

Even under the stress test conditions under the FurMark program, the product only reached a temperature of 64 degrees Celsius only, still maintained extremely comfortable core clock at 1725MHz

Overall, despite using an old design, the MSI GTX 1650 Super Gaming X can be considered as a beautifully designed product with many decorative features, with extremely efficient cooling segment.

If the previously released GTX 1650 version is only slightly more powerful than the “top” version of the previous generation mid-range graphics card, the GTX 1050 Ti only 10%, So the GTX 1650 Super is easy. realized that this was an incredible “makeover” with an increase in power of approximately 35%.

Coming to 3DMark FireStrike test, MSI GTX 1650 Super Gaming X gave the system score of up to 11,178 points when “paired” with Intel Core i7 8700, while the same configuration test, Gigabyte GTX 1650 Gaming version OC 4G only reached 8,201 points only.

Despite losing a little in 3DMark tests, but when “marching” on the game front, the MSI GTX 1650 Super Gaming X gave an impressive result with many games that achieved superior results compared to the RX 5500XT version has just been launched recently.

For example, in the two tests, Battlefield V and Shadow of The Tomb Raider, the “gladiators” of the “green team” proved to be a bit overwhelming, but lost in the already quite “stable” games like Far Cry 5 or Borderlands 3.

The reason for this phenomenon is because the version of Sapphire Pulse RX 5500 XT 4G that Biareview tested has heat problems, difficulty in tests that have to run for a long time, while with the tests needed The less time it takes, the more stable score.

Despite the good design, stable power in the segment, but MSI GTX 1650 Super Gaming X is limited by the amount of graphics RAM only stops at 4GB, while the “rival” RX 5500XT has more sessions. 8GB version with price nearly $50 higher than the 4GB version.

As most of today’s heavy games are starting to require more and more graphics RAM, the 6GB of graphics RAM has become the minimum for users to comfortably push the setting to the highest level, such as For example, with the game, there are many units at the same time displayed on the screen as Total War: Three Kingdoms.

Seen from this perspective, 4GB has become inadequate for those who “play” heavy games, only suitable for Esports games or action games with few objects appearing on the screen.

Besides, the listed price of MSI GTX 1650 Super Gaming X is still higher than the RX 5500XT products, but if through a few promotions, you can still buy this product for a price extremely fascinating.