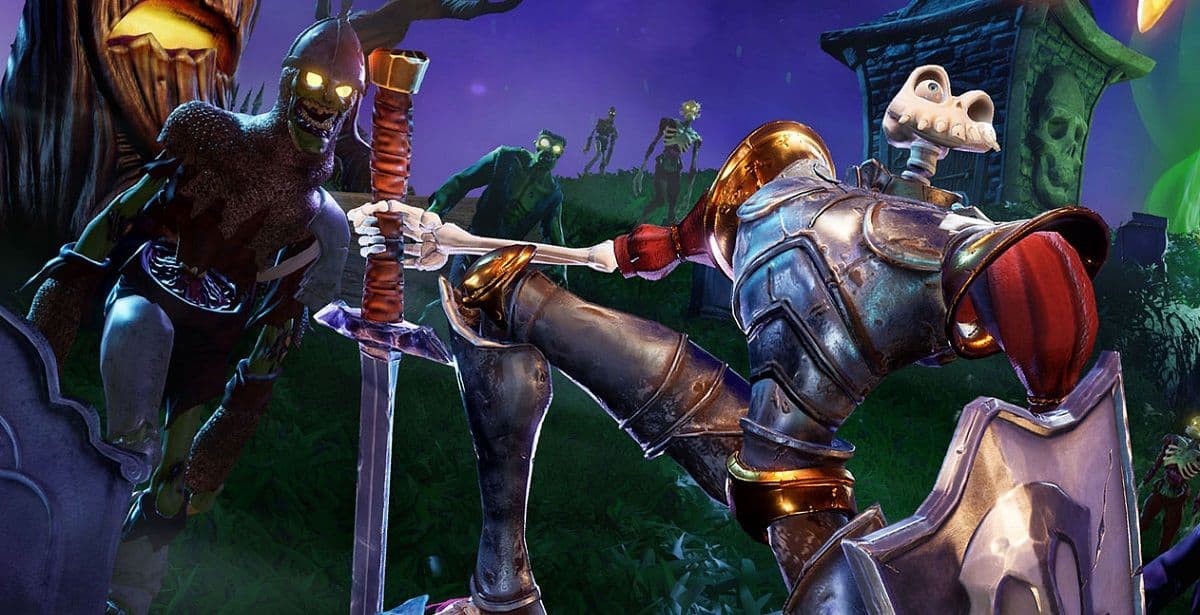 At the time of launch, MediEvil despite bringing many new features but still has many deplorable defects, even when compared to the games of the same time.

Two decades later, when the world had evolved so much, the player’s game standards also became higher, requiring more production, the remake could not meet expectations. That while … still standing still like before!

First, the gameplay of the game is still an immersive action mixed with a little puzzle platformer.

Mr. Dan will be equipped with many long-range and close-range weapons to be able to conquer the bad guy Zarok, along with the shield ready to protect himself from any danger.

Weapons are usually only a few certain types and do not make too much difference with each other, such as Throwing Daggers and Crossbow have the same damage but Crossbow will have the ability to bounce, Dan’s arm can be broken to launch as a long-range weapon with high damage but slower …

With all the weapons do not require the player to learn how to use, but just press the button to execute, has shown the obsolete gameplay.

At first, the main character possesses a lot of blood, monsters are relatively easy to kill and the screen does not have too many obstacles.

However, the way that the old game titles adjust the difficulty will make new and old players have to … disappointed because of their irrationalities.

The monster will gradually increase them health, the obstacles will cause more damage while your health and damage increase slowly, which leads to the following levels it will be quite difficult because the game is punishing players, instead of challenges!

The fact that the game screen does not have a checkpoint system will also make new players extremely difficult if not used to the game, because once “death” you have to play from the beginning.

Next, if you’ve ever experienced the grotesque movement mechanics, along with the game’s ridiculous camera placement, congratulations, the remake MediEvil still has them!

The camera in the game is hard and the player cannot be changed, so some small areas will have a weird angle, sometimes obscuring part of the player’s view.

Sometimes the camcorder does not move smoothly, causing you to have sudden changes in perspective, which leads to the need to reshape everything and find the right direction.

Combined with the lousy camera is Dan’s ability to move “very old” when the actions of your pressing during the game will sometimes be slow with the “hitbox” of the character somewhat bizarre.

If the appearance of multiple monsters did not affect game performance, the frame rate per second (fps) regularly up and down constantly when the monster appears more and when the effect especially.

This has made the game relatively unstable, somewhat annoying for players.

With the graphical power of the PS4, MediEvil was able to characterize the dull but funny scenes that were previously impossible to do.

The characters in the game, such as the terrifying boss Stained-Glass Demon, said that the old teacher Zerok was “retouched” to fit the humor style of the game, sharper and more vivid.

The setting and the screen were also changed a few small details to accurately reflect each area but still did not lose its inherent “quality”.

As for the sound, nearly all of the old voice actors and composers are invited back to be able to “blow soul” into the game again, helping old players quickly catch up to each stage melody, each familiar saying in the past.

Not only that, the game also added the Lost Souls system in MediEvil 2 to give old players a “new breeze” to experience.

Once activated, you will have to help these poor souls to be able to fulfill their last wish, at any stage in Gallowmere.

While nothing special, Lost Souls gives players more reasons to replay the previous levels, creating an additional content layer for MediEvil to explore.

where can you get a MediEvil Remake online