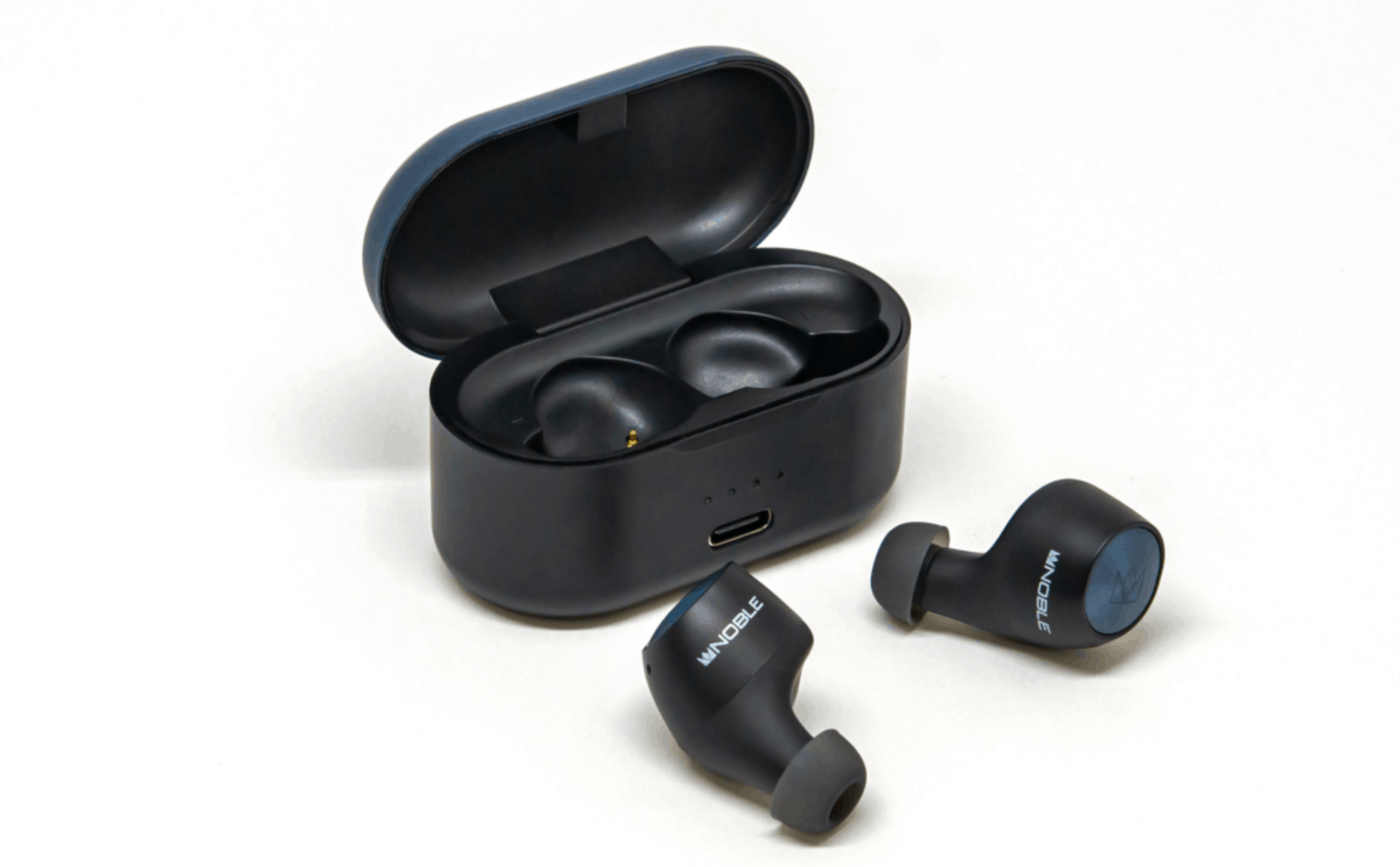 True-wireless headphones have been on the market for a long time, but these types of headphones that have the quality of sound called ‘or’ are indeed rare! That’s why when I heard the news of Noble Audio had launched a pair of TWS first headphones named Noble Falcon, the hope for a high quality of my product was aroused.

Noble is an American audio studio founded by John Moulton – a PhD in audio and also a music lover. He was nicknamed ‘Wizard’ simply because he was able to create high quality headphones that sound like something ‘magic’ appeals to users. To understand how successful this audio company is, one need only look at the price users have to pay to own one of their products.

The first is the Kaiser 10 pair of headphone and later the Kaiser Encore, integrating up to 10 Balanced Armature drivers … for one ear – buying a pair of these headphones owns up to 20 micro speakers for listening to music. In the long run, this is Noble’s flagship product line with prices up to 1850 USD, but many people (including many sound players in Thailand) buy it.

The more advanced pair of headphones to succeed Kaiser is Khan – the application of three different types of drivers including Balanced Armature, Dynamic and Piezo Electric with the price of $ 2399 but .. continues to be welcomed by users!

We will return to Falcon – distributed by the company with a relatively ‘modest’ price – just under 160 USD, which is cheaper than Apple AirPods, Sony WF -1000xm3 and only half as much as Sennheiser Momentum TWS.

The box of this headset has dark blue and black tones, which is also the main color tone of the product.

This is the signature of John ‘Wizard’ Moulton. According to the company, these headphones have been calibrated by him himself, something that makes his expectations even higher!

On the back we have some parameters, the most visible is the Bluetooth 5.0 standard combined with Qualcomm apt-X high performance music compression standard. We also have a True Wireless Stereo Plus (TWS +) connection standard, which helps both sides of the headset to connect to the smartphone to keep the connection stable, reducing lag.

Opening the box we see the headset, charger box and accessory box are all placed on a thick velvet layer, giving us a pretty high-end feel.

In the accessory box we have a cord drawstring pouch, charger cord and 2 rubber gaskets.

The charger used is USB Type-C, which is standard with new smartphone products for easy charging.

Anyone who sees the Noble Falcon’s charging box has to say, “Why does it look so cheap?”. And I also have to admit that placed next to the charging boxes of AirPods Pro, Sony WF-1000xm3 or Sennheiser Momentum TWS, this box is not really high-end, suitable for TWS pairs at a price of $50!

In contrast, in terms of features, this box “overcome” all the pairs of headphones listed above. On a single charge, the headset can be used for up to 10 hours continuously, and when combined with the charging box can charge 3 more times for up to 40 hours. This is the highest usage of any TWS headset on the market, surpassing the Sony WH-1000xm3, and it’s a large headset!

The design of the headset is also ‘unlike anyone’, round and elongated, not horizontal. The exterior is made of a metallic blue, printed with the company’s logo and LED lights hidden at the bottom. These are also two buttons, which have functions including stopping / playing music, turning tracks, adjusting the volume (independent of the source) but not being able to call the virtual assistant.

The most ‘weird’ point of the Noble Falcon is the tube, which is unusually long. Because of such a long duct, the company has to design special ear cushions called the ePro, shorter than the regular ear pads for uncomfortable wireless.

With such a long tube, the Noble Falcon ‘pokes’ very deeply into the user’s ear, making it feel like they’re wearing custom made In-ear Monitor headphones! During the first wear, I feel quite ‘uncomfortable’, but the more you use it, the more comfortable it is because the outer ear body is reasonably designed, not touching the folds in the ear.

The ‘bizarre’ has not stopped there! Although it is a product aimed at listening to music, rather than those wearing sports headphones, the Noble is equipped with IPX7 high water resistance, users can even take it to swim!

where can you get a Noble Falcon online

Taking charge of the Falcon sound is not a dozen drivers like Kaiser 10, not a combination of 3 different drivers like Khan but only a 6mm Dynamic diaphragm, but with the help of equipment. The design is called DLC (Dual-layered Carbon Driver). This driver is made up of two layers, Carbon and Resin, which is said to have higher rigidity than the popular Graphene drivers on the market, helping it move more accurately to reduce distortion half left.

Noble Falcon’s sound expression reminds me of another pair of headphones from the US, the Grado GW100 – not because the two pairs of headphones have the same sound quality, but neither of them follow one. ‘ The standard regular noise’ is like pairs of headphones on the market. Both Grado and now Noble are aiming for a more energetic type, with each individual band having particular points worth mentioning.

Bass range is not lacking at all, but can not be considered a pair of headphones for bass-head. The most descriptive way to describe this bass range is: only when it is necessary to emerge, not ‘messy’ causing discomfort. The mid-bass part has very strong pressure, users can feel it clearly when it ‘smashes’ into their eardrums, with extremely fast speed creating a very dynamic style. The sub-bass part when going down also does not lose power, so that the last note of the Ring of fire by Tim Foust has very high vibration.

On the market there is no shortage of headphones that can express the bass like Noble Falcon, but moving to the upper bands we can see the sound editing experience of ‘Witch’ John Moulton, with both of them Very good details. The singer’s voice is slightly backward, not close to the listener, on the contrary, it is adjusted to have more brightness than average, emphasizing the high-mid range so it can be ‘cut’ through background sound easily. The Birdy voice in the song Skinny Love is magically clean, very charming!

However, we also have to subtract a point of Falcon in this sound range that sometimes produces sibalance in songs with the singer’s voice correctly clicking on the enhanced sound peak of this pair of headphones. Linkin Park’s In The End is a typical example, whenever the ‘Sh’, ‘Ch’ sounds appear, they produce quite clear sibalance, for me, it is too much. In most cases, this high-mid segment is just enough to make the vocalist stand out so it’s not a big deal.

The extremely confusing range of Falcon is the high range. Typically Dynamic drivers often reproduce the bass and midrange well, but at high tones often the shortness of breath causes it to be too ‘gentle’. This is why many companies today use the Hybrid driver design, using Balanced Armature with good sound reproduction to ‘compensate’ for the Dynamic diaphragm for the lower band. Falcon, with just one Dynamic driver, has done a good job of expressing the bass but shines clearly in the highs!

This is clearly shown in the Harman’s Habit instrument in La La Land’s album, Hi-hat sound is constantly shown by Falcon, clearly balancing the brightness at the rising and decay speed. This could also be the effect of the Carbon and resin cover design of the DLC driver, which is high rigidity so it can move better at high frequencies.

One consequence of being able to perform well in high pitches is that the Falcon has a soundstage (sound environment width) that is not bad at all, both in width and depth. All of the sound bands of this pair of headphones are very prominent, ‘scrambling’ to grab the attention of the listener but we do not feel as ‘suffocated’ as in the pairs of headphones with inferior soundstage.

A pair of enchanting headphones but difficult to please the majority

The more I use it, the more I see the Noble Falcon as a pair of ‘anti-AirPods Pro’ headphones, with the design at the opposite extremes. We do not have modern features such as fast connection to the iPhone, no active noise cancellation, no listening to the environment, average talk quality, can not call the virtual assistant always!

But the point of making these worthwhile pairs is what a pair of headphones should have: sound quality. With dynamic sound style, high technique in every strip, Noble Falcon ‘crushed’ AirPods Pro easily, surpassing even Sony WF-1000xm3 pair. This pair of headphones is worthy of the company’s first TWS product that dares to use words like ‘Noble’, ‘Specialist’ and ‘Artisanal’ to describe themselves.

Of course, this pair of headphones will not be able to satisfy the crowd because there are ‘differences’ in design and features. Its sales will be only equal to the odd number of Apple AirPods or Sony WF-1000xm3. But for those who have been listening to music, this is probably the true-wireless option that is hard to beat at the price range, or even at the higher price range.