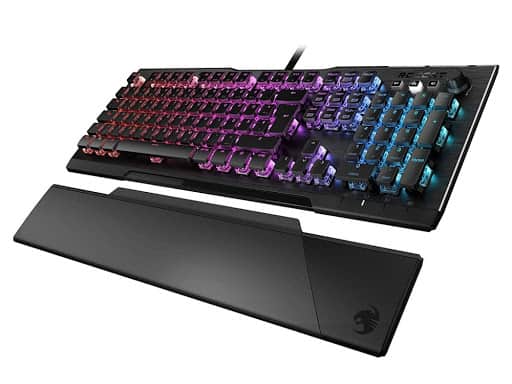 Roccat is a well-known German gaming gear brand, Roccat’s mainstream products include gamers’ products such as mice, keyboards, headsets, and other accessories. The Roccat Vulcan 121 Aimo is one of the latest mechanical keyboards with a signature of the Roccat brand.

Vulcan 121 Aimo is beautifully packaged, the images on the box are printed sharp and laminated as is often found on other high-end products. As a keyboard, the accessory is simply a guide and a sticker can be stuck anywhere you like.

The initial feeling when seeing Vulcan 121 Aimo is “sexy”, the upper half of the switch is almost completely exposed because the keycap is very thin, the entire upper part can be seen, so the color effect of the keyboard is promoted very well, the colors are scattered very well. The keycap is made of ABS plastic and has fingerprints, for users who sweat a lot, the possibility of keycap will be shiny after a period of use.

The Vulcan 121 Aimo is a full-size keyboard, meaning it has a full row of F-number keys and a Numpad number key on the right, this design makes it convenient for both gaming and input. In addition, the Vulcan 121 Aimo has a knob in the upper right corner, which works to increase or decrease the volume or intensity of the keyboard backlight.

Vulcan 121 Aimo is designed to float the entire upper part of the switch so the entire plate of the keyboard is completely out and also acts as the keyboard cover. The plate is made of brushed black aluminum and beveled at the four sides to create an eye-catching light reflection effect.

The bottom shell is made of plastic, has an anti-slip rubber base, limits the keyboard’s movement when in use, the front has a kickstand to help raise the keyboard to an angle of about 7-8 degrees, create a more comfortable posture. Vulcan 121 Aimo is also equipped with plastic armrests, which connect aesthetically with the keyboard and a unique magnet fixation.

Unlike the past, keyboard makers often use Cherry switches with their dependence on the design and not many models. Gaming keyboard makers have designed and manufactured their own switches. With the trend of using “home-grown” switches, Roccat also researches and manufactures its own switches, called Titan Switch. The Vulcan is the first keyboard to use a switch developed by Roccat itself, including the Titan Switch Tactile and the Titan Switch Linear with the same exterior, transparent and good light reflection.

The version in the post is the Titan Switch Tactile with 3.6mm of key travel, receiving commands at a distance of 1.8mm. The Roccat doesn’t offer a ton of force but feels similar to Cherry’s Brown switch, at around 45g. The typing feel and the noise is about the same or a bit smaller than that of the Brown switch. In particular, the feeling of typing, Titan Switch Tactile feels quite smooth and responsive, the keycap is thin, so the feel is good, the switch is still compatible with Cherry’s keycap design, so it can be replaced, quite convenient for games has a hobby of playing keycap.

According to the Roccat housing of the switch, there is an anti-instability structure while pressing the key. Better electrical contact, minimizing the problem of bouncing, is a situation in which points fluctuate when they are in contact, causing unstable phenomena, such as pressing the key once but receiving 2 or more, similar to the double click phenomenon on a computer mouse.

In terms of configuration, the Vulcan 121 Aimo is equipped with a 32-bit ARM Cortex-M0 based processor and 512kb of memory enough to store settings and macros.

Titan Switch Tactile has a very sturdy construction, it can be said that it is more solid than the design of Cherry and the design firms like Cherry like Gateron, it is difficult to disassemble the switch, the “trail” stem (part shaped The + sign of the switch) of Titan Switch Tactile is also lower than that of Cherry. This also contributes to the sturdiness of the overall keyboard.

The cable is designed 1.8m long, soft, and covered with the fabric though carefully, the USB plug is not gold or nickel-plated, personally found this plating unnecessary.

Vulcan 121 Aimo is provided with Roccat Swarm software to configure the keyboard functions, can be downloaded from the Roccat homepage, and only supports Windows operating systems and from Windows 7 and above.

Roccat Swarm is quite easy to use, mainly used to adjust the keyboard’s RGB lighting effects and macro functions to aid in gaming with a variety of macro support preset for many popular games, this is also plus points for the keyboard for gamers. Roccat Swarm also supports full RGB keyboard lighting effects with built-in effects and can be customized at will, in addition to sharing the effects.

Roccat does not describe in the compatibility section, but the Roccat Vulcan 121 Aimo still works well with the latest version of macOS, including the Function shortcuts and the volume knob.

where can you get a Roccat Vulcan 121 Aimo online