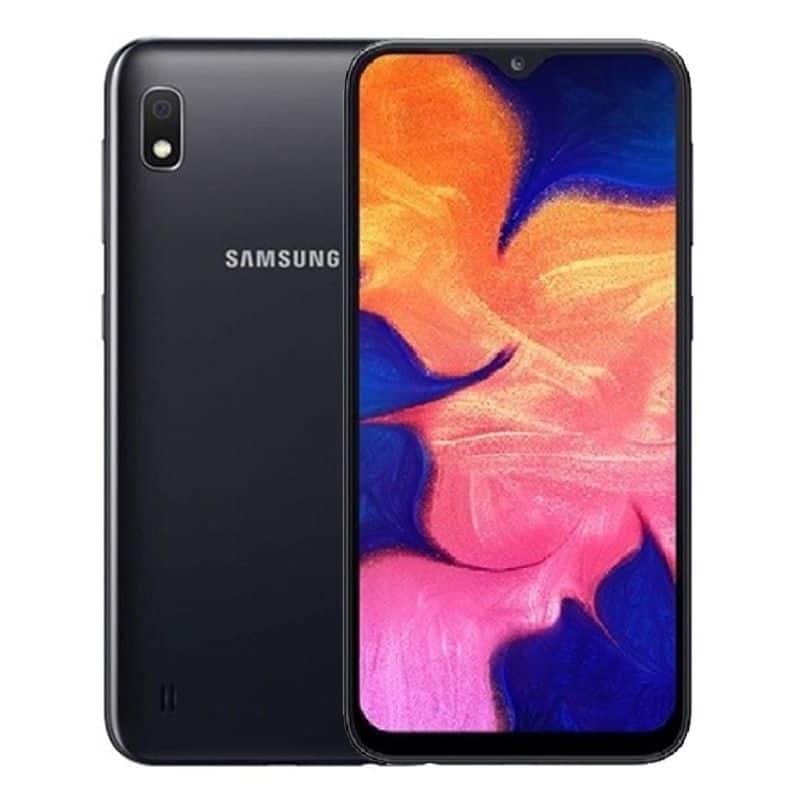 Galaxy A10s carries the basic design of this year’s A series, looks no different from Samsung Galaxy A10 except the new green option. The screen border of the device is quite large compared to today’s standards. The chin is 8mm thick and has a notched upper for selfie cameras and speaker.

The back of the Galaxy A10s is made of glossy plastic, which does not give a luxurious feel. However, quite commendable for Samsung with emulsion paint and blue tones are impressive, though not following the trend of discoloration like other brands. It’s a bit confusing that the blue tones of the A10s are more blue, but the company still calls it green. You need to hold it directly in order to see this “magic”, but the photos taken are often very skewed.

Perhaps in this segment, a large, clear, high-brightness screen panel is more than enough. Galaxy A10s still carries a screen resolution of 720p HD, using IPS LCD panel instead of Super AMOLED like its predecessors. The image quality is definitely not high, but it is still quite bright and beautiful enough to use outdoors in the sunny sun and watch the movies for hours and hours.

The biggest change from A10 to A10s is MediaTek Helio P22 processor instead of Exynos 7884. The new chip is designed on 12nm process to save more battery, higher core system and for processor performance the task manager is a bit better.

Galaxy A10s can play PUBG Mobile on average graphics. In the menu screens before playing, you will see the machine is delayed, jerky lag quite a lot, but in the match, the frame rate is smoother, the character control is smoother, the overall achievement is completely enough to play.

Galaxy A10s still uses 32GB of internal memory, which is a bit meager compared to the needs of today’s users. If you take photos, record videos and download a lot of apps, you’ll need to use a MicroSD card slot.

The second major upgrade of the A10s is the 13MP main camera system with f / 1.8 aperture, with an auxiliary depth sensor for multi-level Live Focus font removal.

The most impressive thing about photos taken from the A10s is high-definition, can zoom up to 2X and then capture that still looks natural. HDR mode for good photos, beautiful colors but still lacks detail in the dark.

Galaxy A10s night shooting capability is really good with a cheap device. By default, the device will automatically push the brightness to very high, causing the image to burn, blur. However, after adjusting to reduce the EV, the image produced a good detail, moderate noise and more beautiful colors. However, the device was experiencing a small error when shooting HDR night, causing the image to overexposed, the dark area is pushed too brightly and the image looks like there is a layer of color effect overlay.

Live Focus mode, although slightly reduced but still works well. The object border separator and bokeh maker are natural, error-free, and generally workable for a device that costs just over $150.

This is the most commendable aspect of the Galaxy A10s. In addition to the processor to save more battery, the machine is also upgraded from 3400mAh capacity to 4000mAh. Practical use with high demand such as gaming, surfing Facebook, Instagram and watching YouTube videos continuously at 50% brightness, the device can still last for more than 20 hours and still has 20% battery. If the demand for less use, you absolutely can use the machine in 2-3 days after each charge.

Unfortunately, the Galaxy A10s does not support fast charging and the charger included with the device also has only 5V / 1.5A output, so it takes about 3.5 hours to fully charge the device.

One minus point for the Galaxy A10s is that the OneUI interface based on Android 9 has been cut off quite a few important features, typically Blue Light Reduction. This feature has become a standard on all smartphones today, allowing more comfortable use at night, minimizing eye damage. In addition, the smart screen capture feature and double-tap to turn on the screen have disappeared.

In addition, the interface of the Galaxy A10s is nothing to blame. The icons, buttons, fonts and browsing menus are all carefully groomed aesthetically.

Overall, the Galaxy A10s is not yet the most perfect phone in the segment of less than $200. However, with the advantage of battery, large screen as well as dual cameras, Galaxy A10s will still appeal to quite a few users – those with tight budgets but still want to have equipment from big brands like Samsung.

where can you get a Samsung Galaxy A10s online