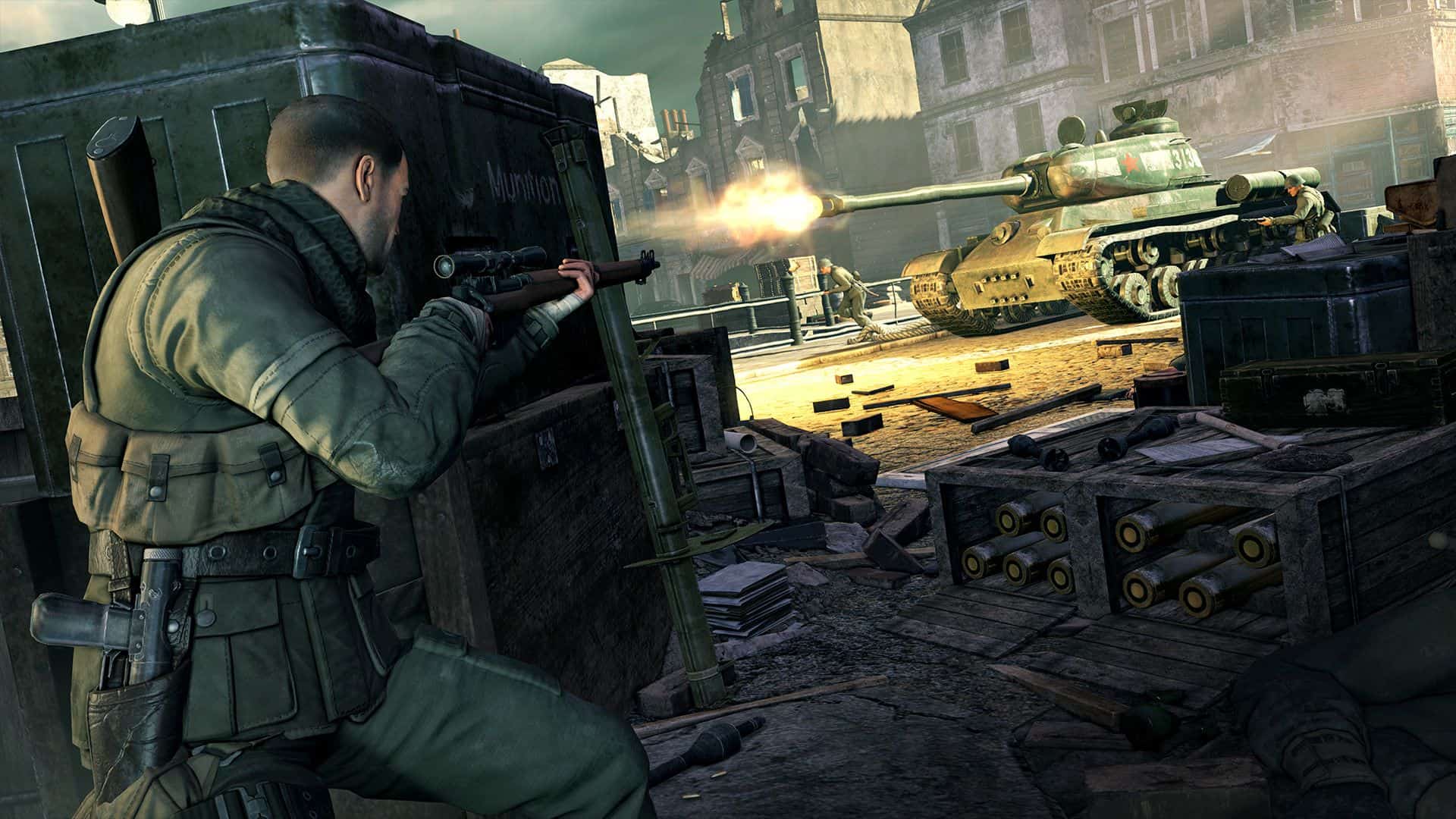 As a “slap back” version (remastered) rather than a “remake” version, Sniper Elite V2 Remastered almost keeps everything that made the name of the original game a few years ago.

Participating in special campaigns as a “super-elite” Karl Fairburne sniper of the Allied forces, players will pass through enemy locations like fierce fighting areas in Berlin, the testing facility for V2 missiles, or Red Army battlefields to search and steal secret materials of this advanced weapon of Nazi Germany.

The beauty of the game first lies in the open mechanism of the game. Instead of “squeezing” characters into plot lines like the Sniper Ghost Warrior series, the Sniper Elite versions often “drop” the character into the sandbox opening game, to let gamers unleash their imagination, think to solve the tasks that the game set. Sniper Elite V2 Remastered is no exception.

You can run around, shoot frantically, sweep up all opponents in a Rambo-style game, or sneak through obstacles, set traps and throw rocks to distract guards to approaching the target as a ghost … all these factors are left open for players to choose according to your “taste”.

For example, from the second stage, the player can choose to assassinate rocket researcher Gunther Kreidl by “bracing himself” against the Convoy fleet full of SS soldiers with both machine guns and armored vehicles, or single. It is easier to quickly break the cleverly prepared explosive bags at the right time to “kill” the entire fleet, without having to go through the slashes – tired shooting. Or when it comes to the third screen asking to break into the V2 rocket research facility, players can tiptoe using the reduced-sound Welrod to smooth out all the guard stations at close range. But there is also a “hands-on” way rather than taking advantage of the noise from the loudspeaker to “treat” all the remote guards in a very stylish way … Vasily Zaitsev.

Of course, these calculations require the player to observe the overall level of play, the ability to “watch” at the right time and the absolute accuracy on a series of actions. Then when you pass a difficult segment, players will feel a bit of “achievements” and a “critical” feeling like when playing the real sniper.

Attracting the fans of the game series the most, and also the “most eye-catching” point of the whole series, is the Bullet Cam mechanism that tracks each shot accurately in a cinematic style. It was almost a kind of reward for landing hits that hit the target with a high level of achievement bonus, urging players to have more accurate, farther, more complex shots.

where can you get a Sniper Elite V2 Remastered online

Most of the surface textures of the screen are “upscale” to the high resolution, making the game environment become a bit clearer than the original version. However, just a simple upscale method from the surface has reached 720p HD standards so it is difficult for players to recognize the difference.

The most obvious “upgrade” is the weapons and vehicles with more polygons, more detailed and sharp surfaces when most are fully redrawn, drawing closer to the graphics of a game many years of age come with the quality of modern games. This can be seen as the part that the development team “takes care of” the most for this version.

Dynamic light effects are also added to the game, creating a brighter environment, the explosions are a bit more eye-catching than the previous version, but these effects are really very It is difficult to detect unless the player has “owl” eyes or is simply set parallel to compare the two versions at the same time.

The sound of Sniper Elite V2 Remastered is also remade a bit with the sound system “raw” from new game versions with a more realistic feeling, lessening the “flat” feeling of the compressed sound. Save previous storage capacity. The gunshots became more sharp, instead of being overwhelmed by the explosive sound of the original version.

Upgrade into the old game is a bold move for many game studios. For some titles, it was the revival of a monument, but for some other titles, it was merely a “milking” game of the publisher for an old-fashioned game.

Sorry to say that Sniper Elite V2 Remastered is in the second case when the improved elements are very humble and do not bring any special impression for gamers, including fans “Of the game series.

If you’ve played through the original version, you won’t need to hook up to buy this version even though the company is still actively soliciting old players for a discount of up to 20% for the new version. Because the changes in both graphics and gameplay are extremely small and do not deserve the money.

Old players will not need a dozen characters migrate from the Zombie Army game series, or 16-person multiplayer system with many inadequate players and not many servers worldwide, while goods dozens of original problems still haven’t changed much, like the ability of “superheroes” to shatter the fuel tank cap to bring down a whole … Tiger, or idiot soldiers appearing bluff in Everywhere seeks to “catch” your character.

For new players, when having experienced many games with better graphics and gameplay, the “upgrade” version of an old game like Sniper Elite V2 Remastered will not give any impression or charisma significant. Even when compared to the two recent versions of Sniper Elite 3 and Sniper Elite 4, which are somewhat “faded” in the flow of modern games.