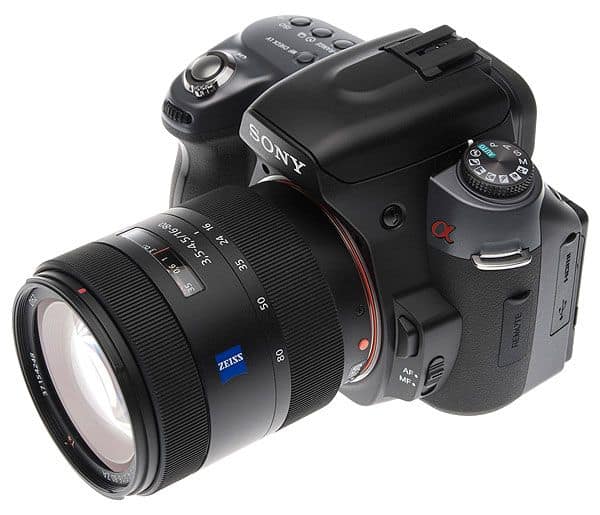 Sony Alpha A550 is the latest version of Sony’s latest mid-range lens aimed at photography enthusiasts or wants to upgrade from a popular DSLR. Along the way, the A500 debuted at the same time, the A550 demonstrating the ambition of Japan’s leading electronics company to compete in the market with the Nikon D90 and Canon EOS 50D. Good RAW image quality, fast continuous shooting speed and convenient control system are all very welcome in this new lineup.

The A550’s design is a bit like the A380, but its larger body and slightly more sophisticated key system. The three-dimensional device is 137 x 104 x 84 mm and the weight of the battery is 600 grams, the Nikon D90 is almost the same size and slightly smaller than the Canon 50D. Sony Alpha A550 is much sturdier and more compact than the low-end models such as the Sony Alpha A230, Sony Alpha A330 and Sony Alpha A380. The button layout system is quite reasonable on the surface to help users quickly control the parameters when looking through the viewfinder or use the Live View function.

The screen of the A550 is 3 inches wide, with a resolution of 920,000 pixels. This screen can also be turned 90 degrees along two axes, which is very useful when using the live view feature in difficult shooting angles such as high overhead or close to the ground. This LCD utilizes Xtra Fine technology to prevent glare and reduce color defects. In addition, the Auto Brightness Control feature automatically adjusts screen brightness and contrast according to the environment. It is a pity that Sony does not equip the second A550 sub-screen on the machine as mid-range models from Canon and Nikon. In return, the machine interface is very simple design with two options: display basic parameters with illustrations or display the whole set with smaller icons.

Sony offers the A550 two very interesting Live View modes. With conventional viewing, light from the lens will be directed to a small sensor placed near the optical viewfinder. This sensor will acquire and transmit images down to the LCD. However, this method is bad when only 90% of the frame is allowed, which is smaller than the viewfinder’s coverage. Display ratio is also not reached 1: 1, so it is difficult to focus manually and adjust the deviation of field of view and viewing angle. In addition, the installation of a sensor in a five-prism prism also adversely affects the magnification of the optical viewfinder. The Viewfinder on the A550 has about 95% coverage and a magnification factor of 0.8x, far behind the 0.94x ratio on the Nikon D90 and 0.95x on the Canon 50D. When switched to MF Check Live view, the reflector will turn on and the light will travel straight to the main sensor of the machine. The screen displays 100% of the frame and allows the focus area to be magnified up to 14 times to check the accuracy of the manual focus.

where can you get a Sony Alpha A550 online

The A550’s Exmor CMOS sensor is 23.4 x 15.6 mm in size and has a 14.2 megapixel resolution. SteadyShot body shake technology works with all compatible lenses. The test shows that the mechanism works perfectly, increasing the exposure time to 2.5 to 4 stops without the risk of blurring. The image is high in detail, however, quality output JPEG is not really match the level of sensor equipped on the machine. When switching to raw, this problem will be resolved. The resulting image quality can be on par with those of the same range and can be used at ISO settings up to 3,200. The auto-optimized contrast feature works great, giving good control over the missing and overfilled areas. However, white balance is sometimes inaccurate, causing the image to tend to go cold or sometimes over-emphasize the contrast and color.

The ISO range of the machine ranges from 200 to 12,800, incrementally by 1 EV. The noise canceling feature on the A550 is better rated than the A500 and other popular Alpha models. At the default setting, the machine tends to have a slightly noise-canceling effect which results in color loss and loss of detail. In return, the image looks cleaner and smoother. The subpixel can be detected in some areas of the image even when the ISO setting is low, especially when the contrast enhancement feature is enabled. 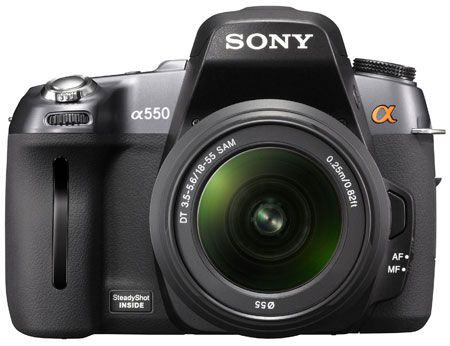 The experimental parameters show that the machine is fast but not very impressive performance. Startup time takes about 0.5 seconds compared to speeds of less than 0.1 seconds on the D90 and 50D. The standby time between the two images is about 0.9 seconds equal 50D, but slightly less than the D90 (0.6 seconds). In return, continuous shooting speed of the machine is quite “terrible”. The A550 can shoot five RAW images per second, which is slightly higher than the D90 at 4.5 frames per second but loses 50D at 6.3 frames per second. In Speed ​​Priority mode, the A550 can reach 7.1 frames per second, 13 continuous RAW images or 7 RAW + JPEG images.

Unfortunately, the A550 is not equipped with the camcorder function which is very popular on the current DSLR line out. In addition, the machine does not have the feature to allow depth-of-field picture (DOF) as medium-sized competitors from Canon and Nikon.