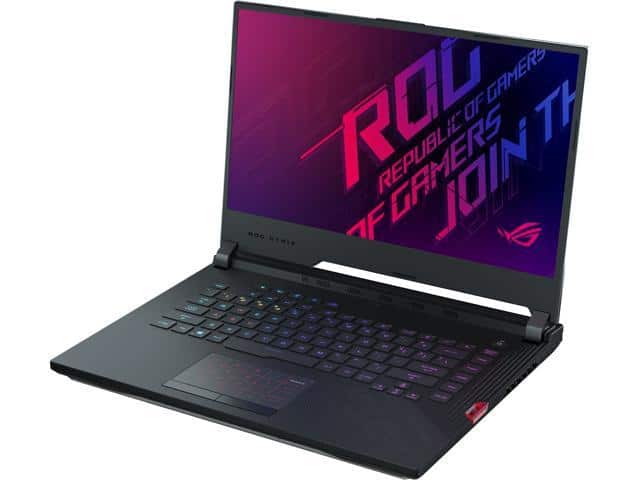 ASUS Strix SCAR III – As usual, ASUS continues to upgrade its gaming laptops, both in design and configuration, with many new technologies to better serve gamers, especially have been loyal fans of the company for many years.

Strix SCAR product line can be considered as a mid-high-end gaming laptop, second only to the “super model” Zephyrus “product line that was introduced by Biareview recently, received quite a lot of affection in this upgrade with ASUS Strix SCAR III version.

Although at first glance, the new upgraded version is not too much different from the previous version, but going into details, the company has put a lot of effort to complete the details. Previous versions still do “not yet”, in order to bring a more comprehensive mobile solution for users, especially professional gamers.

In addition, there are more powerful hardware upgrades with 9th-generation Intel Core i7 processors paired with NVIDIA RTX graphics cards, capable of “carrying” blockbuster games or sports games at ultra-high speeds, reaching the “eSports standard” and becoming one of the first major products to be used in major ESPN tournaments.

If a few years ago, when referring to gaming laptops, people often thought of thick, heavy laptops. In the past few years, With the rapid progress of technology, gaming laptops can become significantly “slim”.

Similar to the previous generation, the design of ASUS Strix SCAR III is quite compact with a real weight of only about 2.4kg and the power adapter weighs about 900g, is quite light and also quite easy to carry in activities daily.

The reason the product achieves such a light weight is because it has used a lot of plastic materials for its frame and chassis, except for the important bearing and coupling positions made entirely of metal. However, this plastic material is selected and manufactured with high quality, making the case still as sturdy as products made of ordinary aluminum.

ASUS Strix SCAR III is equipped with a 15.6-inch screen with super-high scan speed of up to 240Hz and 3ms response time, but thanks to the ultra-slim three-sided design that looks overall, the size of the machine a little smaller than the 14-inch devices equipped with thick bezels of the previous generation.

The most noticeable and brightest change on the product is the integrated keyboard that has been changed quite a lot compared to the previous version, removing the “squeezed” part of the number pad that is somewhat … ungainly and move this feature to the mouse pad.

Thanks to that, the keyboard strip becomes more balanced and spacious, while if you need a number of numeric keys for numerical tasks, users just need to tap the word “NumLck” on the touchpad, a series of lights The background will turn this area into a spacious and comfortable numeric keypad.

The two hinges have also been reworked with a more solid structure, but also lighter, easier to open with one hand than the previous generation, in this part, the design on the product is somewhat “learned” from the high-end Zephyrus product line, creating more space for the vacuum and radiating heat to the surrounding environment, thereby reducing the operating temperature.

The ASUS Strix SCAR III backlighting system is also upgraded with the “submerged” RGB LED strip on the bottom, synchronized with the keyboard backlight and ROG logo backlight on the outside to form a unified performance platform quality “performance” but not much use with ordinary users.

The most notable feature that ASUS has upgraded to the product is the physical key “Keystone” designed in the form of an amber yellow lock located on the side of the device.

This feature is currently being tested in storage, but according to some sources from the company, in the future, this Keystone feature will be applied to the game profiles that gamers can use to quickly set up your game to your liking, making ASUS Strix SCAR III your own “Kingdom of gaming” with the most level of personalization.

As one of the key ASUS gaming laptops in the mid-high-end segment, ASUS Strix SCAR III is equipped with an extremely powerful configuration with Intel Core i7 9750H CPU for laptops, NVIDIA RTX graphics cards 2070, DDR4 RAM capacity up to 16GB and solid-state drives up to 1TB.

With new power coming from Intel’s 9th generation processor, the system easily achieved 16,428 points in the 3DMark FireStrike test and 7,105 points with the 3DMark TimeSpy test, equal to the desktop RTX 2060 version but operates at a much lower power consumption, “enough load” for a medium-sized adapter so that users can easily carry it with them.

This score shows that the system is easy to carry heavy games at the same level as the desktop system using RTX 2060 graphics card, almost without any difficulty at 1080p resolution above. The device is quite easy at high speed, making the most of the anti-tear feature of G-Sync on the 240Hz screen included.

The 3DMark PortRoyal test for Ray Tracing rendering also only gave a score of 4,316 with a frame rate of only about 20fps during the test. This score shows that games that use a lot of Ray Tracing rendering are still a big burden for ASUS Strix SCAR III, but for games that use part of these constructions such as Battlefield V or Metro Exodus, this is not must be a matter of concern.

At first, in the Assasin’s Creed Odyssey test, the system gave an average speed of 52fps, but in the “slowdown” phases in vastly detailed scenes, the minimum speed was only 22fps. This is still not a “perfect” game for graphics cards from the “blue team”.

The two tests Batman Arkham Knight and Total War: Three Kingdoms brought stable test results and achieved good results at the highest setting. This shows that gamers can safely play heavy games on the market today without having to weigh the ability of “carrying” the system.

The most worrying thing of the our is the ability to cool the system when the “device” is too small and thin, but the ASUS design team has successfully completed its task, even better a little more than the previous generation due to the “ventilation” design by lifting the screen to create the necessary opening for the air inlets.

Stress test with Furmark program, ASUS Strix SCAR III reaches a stable temperature of about 76 degrees Celsius, a level of heat “cool”, even better than many desktop systems in use original heat sink.

After all, when spending more than 60 million on a laptop, gamers will surely expect more of the quality of products, both in terms of strength and design and manufacturing.

The power is not to say, but the exterior design is a weakness of ASUS Strix SCAR III when using too much plastic. Although built very well and meticulously, but the feeling giving users will certainly not “perfect” as the “full aluminum” Macbook machine from the inside out.

Besides, another minus point comes from the ASUS Strix SCAR III heatsink fan operating quite noisily compared to the common ground of gaming laptops today.

While this means that cooling is more efficient than many other gaming laptops, it is also annoying, especially when used in quiet environments.

where can you get a ASUS Strix SCAR III online