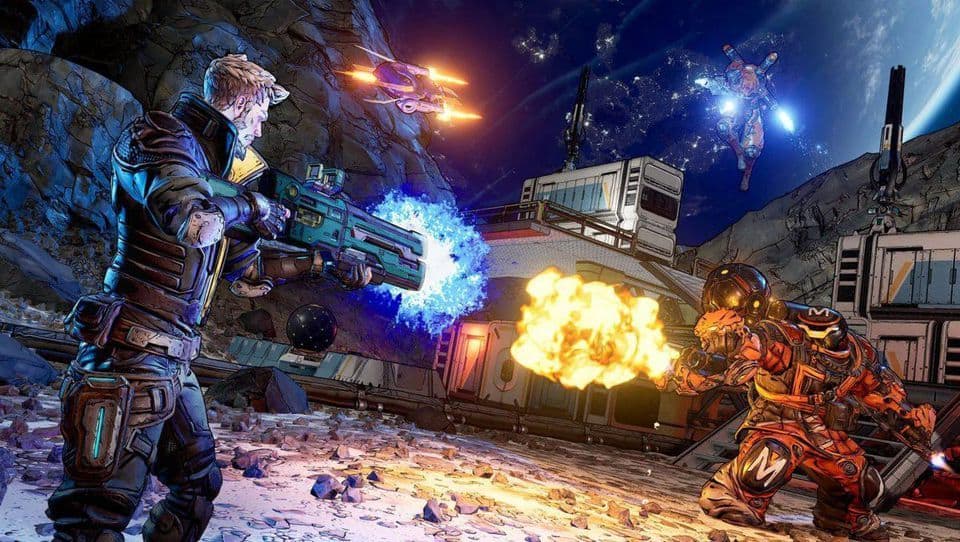 If you’ve played Borderlands 2 many times and always feel that moving around the map feels a bit slow because the character can’t cling to the edge to drag himself upwards but keep falling to the ground, then Gearbox Now guarantees players will never experience that again.

In Borderlands 3, mobility has been completely improved. In addition to the ability to climb on almost any surface, you can also surf on the ground by pressing the sitting button while running like every recent first-person shooter.

These factors make the action of the game become more agile and cool. Instead of having to sit behind a wall when countless enemies shoot you down, the game encourages proactive attacks because you will not be able to recover your health bar before being attacked by enemies, like your armor is also very fragile.

Besides, Sanctuary has now turned into a spaceship, although smaller, but helps connect locations and shorten the travel time of the player. All elements of the city are retained from the previous section with some minor changes: you can buy upgrades to bring more furniture at Marcus’s store with money, not in the black market with Eridium.

Referring to Eridium, the black market now mainly sells rare decorative accessories and weapons at a “extremely expensive” price, but that also means players can earn Eridium more easily than the previous one.

If the predecessor had up to 17 million different guns, then Borderlands 3 will have at least … a billion unique guns!

The guns in the game are classified into six categories: pistols, submachine guns, shotguns, rifles, sniper rifle and cannons with nine different manufacturing workshops, creating diverse characteristics for weapons: Hyperion will have shields attached to the gun to protect players when shooting, Torgue allows to switch between normal and sticky fire mode, Maliwan will deal less physical damage but can cause enemies. sticking to the element’s effect faster, Atlas will have the function to place the detector on the enemy, causing the fired bullets to automatically find its way to the opponent …

Especially, if you remember Borderlands 2, Tediore’s gun line will detonate every time you throw, then when loaded in Borderlands 3, these guns suddenly … grow legs and automatically shoot all the enemies until the end. The bullet then jumped into the face of the nearby enemy and exploded!

There are also guns with special firing methods such as the L0V3M4CH1N3 with almost maximum accuracy but cannot be shot in a straight line but in a heart shape, or the Essential Conference Call with the function of firing bullets from Other bullets horizontally.

All are enough for players to see the variety of guns in Borderlands 3!

If you are interested in the extremely characteristic cast of the predecessors, then be ready to be mesmerized by the new “faces” that appeared in Borderlands 3.

The game is set after the events of the second part, you are still a Vault Hunter looking for dungeons containing countless wealth. In your quest, you caught the attention of the frenzied leader Children of the Vault, the twins Troy and Tyreen Calypso.

While not as funny as Handsome Jack, the Calypso couple shows a lot of practical satirical aspects, such as Troy always has cameras to livestream everywhere, while Tyreen have influen in the online community.

One point of concern that the Calypso brothers have is super powers. This pair of villains has the ability to draw the powers of the Sirens and pass them on to each other or their followers. This makes the enemies you have to fight throughout the game somewhat more interesting.

As a villain for a Borderlands game, surely the Calypso pair will have some big conspiracy? Of course! Unlike the villains in the previous sections, these two men want to monopolize Vault throughout the universe to be able to occupy all power and dominate the world. Your mission is to cooperate with the Crimson Raiders to prevent their intentions.

In addition, players will encounter many important people in Borderlands, Borderlands 2 and even Tales from the Borderlands. Including Zero also returns and plays a very important role in the content.

One of the “weak” of Borderlands 3 is that the technical errors and optimization are not really good. The game frequently drops frames when fighting or driving, even in cutscenes, and especially when shooting.

Besides, the writer was thrown into the game while “fighting” with the boss Katagawa Ball for a long time and had to fight from the beginning. In addition, some minor errors such as the textures in the game sometimes take a lot of time to display, the sound is sometimes interrupted while listening to the Echo Logs and frequently jerks, lag on the main screen.

where can you get a Borderlands 3 online