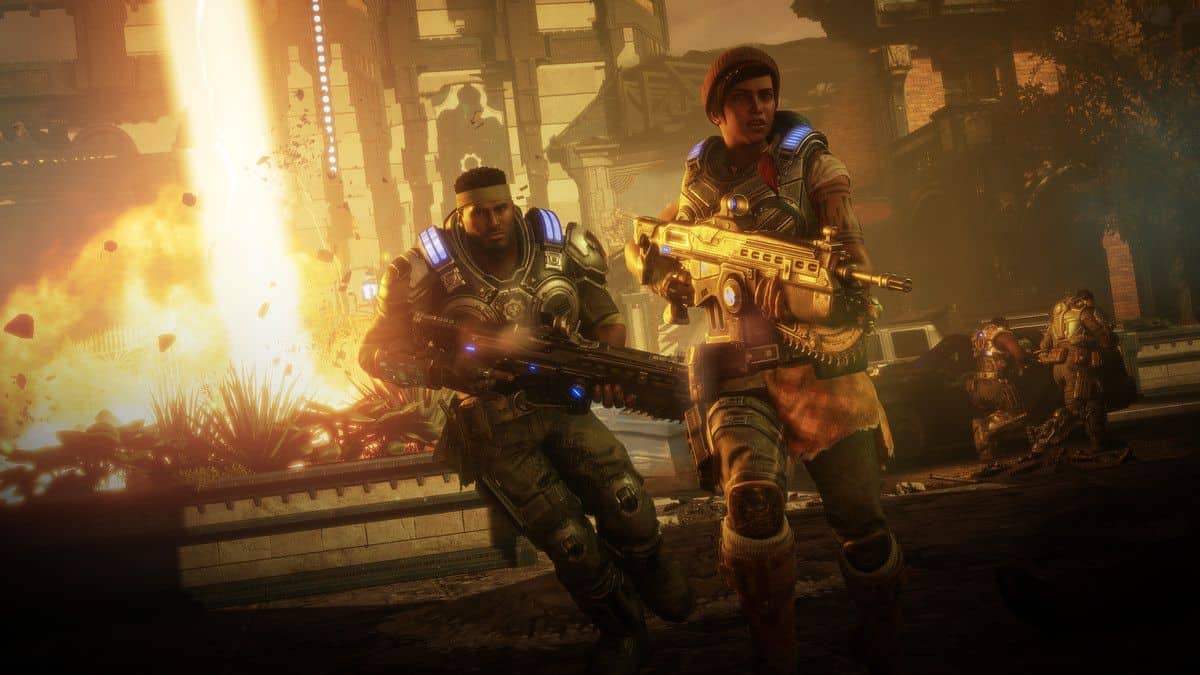 The first reason Gears 5 “castrated” half of its name is nowhere else but in the very heart of the story and its context.

25 years after COG’s struggle against Locust and Lambent ends, and just a few months after the events of Gears of War 4, the content of Gears 5 simply doesn’t have room for long-term battles on the scale of Pendulum War or E-Day.

Instead, similar to its predecessor, it introduces a new seed that threatens the remnant of humanity on the planet Sera, and takes the player on a journey of heathen individuals in search of and eradicate it before history repeats.

If you’re looking for a dreary and hopeless sense of the great wars associated with the first three versions of Gears of War, then you’re probably disappointed, because Gears 5 is like the previous version is still a personal story with a serious but not always harsh tone, and directly criticizes the dictatorial nature of the post-war COG.

The game explores a scenario model worth exploring for the Gears of War universe: when a race that exists for nearly a century only witnesses bloodshed and death, then their peaceful time will not be as light as a feather.

It shows the dissatisfaction of not only the non-religious people, but also within the COG Gear ranks, creating a divide between a new generation of Gears who are like-minded.

The main plot of Gears 5 follows Kait Diaz to rediscover his Locust roots as a completely different matter. It happens in the way you expect it to, and also because this story is part two of a new trilogy, and we get to enjoy a tail-off story right at its climax.

What Gears 5 did not reveal to you before starting, it is the high number of … “fan-service” to touch the roof that the story brings, from reuniting the core characters to decoding complexity still lingers from Gears of War 2, as well as creating a connection between Niles Samson, Locust and Swarm.

It can be said for longtime fans, the whole story of the second chapter located in the snow mountain of Kadar is one of the best described pieces of content in the entire series.

Not to mention, would anyone ever guess that hanging around the open world model was a wise decision for Gears 5?

Maybe Kadar and the red sand desert Vasgar are not open maps that are carefully designed to the teeth, but the way they highlight the peace between the sky of despair through every moment of surfing on the boat. Wind sailing is the level of underground emotions that Gears of War brings to those who are willing to accompany it.

If you wonder why Gears of War fans can endure the same style of play for more than 10 years, the simple answer is: it’s unique!

Gears 5 in particular and Gears of War in general is one of the series where the gameplay in single player and multiplayer is the same as oil and water.

In single play, from Campaign to Horde (and now Escape), focusing on firing enemy weaknesses is recommended, movement is not too complicated, and Gnasher is still late at night is the most useful weapon in PvE.

Differences in gameplay rules create a certain skill scale, and Versus players will sometimes realize that PvE style of play has many nice features and vice versa.

Of course, no matter which part you play, the feeling of shooting in Gears 5 is still great!

The single player part of Gears 5 also has the appearance of a companion robot JACK, with quite a bit of ability to support players in combat: stunning enemies to make them feel more out of place, applying a temporary armor to nullify all received damage, invisibility for a short period of time, hack and make an enemy Swarm on the team, and more.

The JACK upgrade process is done by finding the rolls of batteries scattered in the environment, which is also one of the two methods that Gears 5 uses to motivate players to explore.

The second method is that Relic Weapons appear only once in two open maps, with more special functions than the original version, such as Longshot version of Relic will give you 3 more ammo through each accurate reload.

JACK’s distinctive style of play continues to exist in Horde and Escape. For Horde, this mode of play … has not been very good, so the writer will spend the following to talk more about it. As for Escape – the new 3-player co-op mode brings Gears 5 to a less action-packed but suffocation style.

The three players will have to escape from Hive – a set of randomly arranged rooms with random encounters.

The player starts with a single extra weapon and can only pick up weapons from the defeated Swarm or from a room located halfway up the game, but the level of play is always 100% sure you will never have enough Bullets to take down the entire Swarm along the way.

This makes Escape maintain its spirit in the name. Your goal is to escape, you should only take out Swarm when absolutely necessary, and it is this interesting principle that creates choking chases for Escape, although theoretically this mode is not worth high replay value.

Versus was still one of the shining gems of Gears 5. Before the game was officially launched, The Coalition assured fans that the game’s PvP would no longer be a traditional “Gnasher party”, and they … somewhat successful?

Gnasher rifles remain the main focus of head-to-head combat, but most of the other Gears 5 weapons are slightly improved.

The most visible is that Lancer (besides Retro, there is also a GL version with two grenade launchers), although having a higher recoil, the opponent is significantly faster.

Some of the new weapons also have their own arena, such as the Talon automatic pistol that can be used as a hand-held Enforcer, the “LMG” Claw gun with extremely thick magazine, but super low accuracy in the first few shots and The bull’s eye will become smaller if you hold the trigger longer.

After all, the Versus in Gears 5 is still the Versus of Gears of War. There is not too much new to say about it beyond what was expected of it: extremely high skill requirements and those who master the movement skills will always win.

where can you get a Gears 5 online