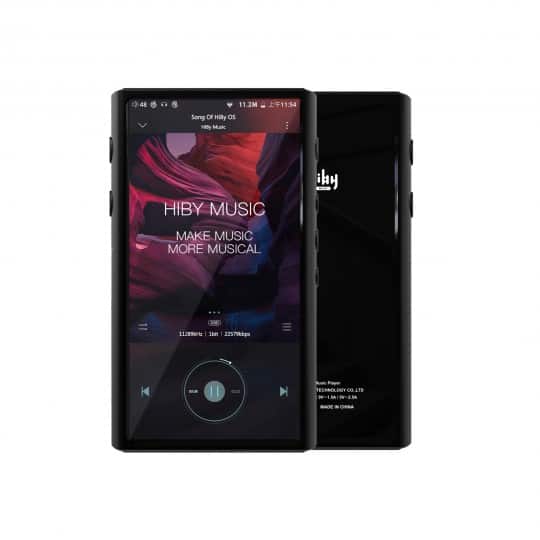 After the resounding success of Hiby R6 – a smart, powerful, and excellent audio player on the price. Hiby recently launched a new range of music players aimed at the mid-end segment called Hiby R5. Whether this new product will inherit and promote the strengths and performances of Hiby or not, let’s find out through this review.

Hiby R5 is packed in a black paper box, quite similar to the box of Hiby R6 before. The device is placed in a thick foam layer, and at the bottom of the box, there is an accessory compartment. In general, the packaging of Hiby R5 is very minimalist and intuitive, not colorful at all.

– Laminated film to protect the back

After experiencing a lot of music players with different sizes, the feeling of holding a compact music player in your hand is still comfortable. Measured at 107.7 x 61.2 x 15.6 (mm) and weighed at 158g, the Hiby R5 fits in the palm of your hand and can be easily operated using just your thumb. Despite its lightweight, the curved edge design with silicone cover feels firm.

At first glance, the Hiby R5 looks like a zoomed Sony A45 model with a monolithic metal frame with rounded edges on the left and right sides. The front of the machine is a 4 inch IPS screen, 540×1080 resolution for pretty colors, clear images, and a wide viewing angle. The screen border is quite thin so the overall look is very modern and harmonious. On the back, the top and bottom of the Hiby R5 are all equipped with glass to make the machine more luxurious and advanced.

On the right side of the device, there’s a physical control cluster with the same key layout on Hiby R6. The most prominent feature is the power button with LED status notification. The color of the lamp will show the working status and quality of the music format being played. Below that we have the stop/play and switching songs buttons.

On the opposite side, we have the volume up / down buttons and memory card slot. This card is designed as a tray like on a smartphone, so you need a stick to change the memory card.

All ports of Hiby R5 are located on the bottom edge of the device: 3.5mm Single End port also takes on Line-out function. The USB Type-C port serves the purpose of the charging station, digital SPDIF signal output, data transfer, and USB / DAC.

The most special thing about the connector on Hiby R5 is that it is equipped with a Balanced 4.4mm port instead of the traditional 2.5mm port. Normally the Balanced 4.4 port will only appear on high-end music players.

The Hiby R5 audio decoding floor is equipped with a pair of emerging DAC chips from American manufacturer Cirrus Logic, codenamed CS43198. The chip was introduced in 2017, but not until recently appeared in many commercial products, typically DX160 of iBasso and SR15 of Astell & Kern.

The decoding ability of CS43198 is not inferior to ESS or AKM, 32M / 384kHz PCM, and DSD256 processor. It is also equipped with Cirrus Logic’s proprietary MasterHIFI ™ and SmartHIFI ™ technology, which delivers the most detailed and timbre reproduction of the music in the most honest way.

The line out ports will not appear individually on Hiby R5. Instead, both 3.5mm Single End ports and 4.4mm Balanced ports will be able to output the line out directly which allows you to mix with both single-end and balanced amplifiers with ease.

Equipped with an advanced power management system, the Baly R5 Balanced Gate produces an impressive output, reaching 1040mW at 16Ohm and 564mW at 32Ohm, powerful enough to pair with a variety of high-power headphones.

To ensure the smooth operation of the system, Hiby R5 is equipped with a Snapdragon 425 chip identical with Hiby R6 without cutting down the clock. The RAM is 2GB, less than half compared to Hiby R6 Pro but still enough for basic music or web surfing applications.

The internal memory of the device is 16GB and can expand to 512GB through the Micro SD card slot.

Like its previous music players, the Hiby R5 will also support 2-way Bluetooth, both capable of transmitting high-quality Bluetooth and turning into Bluetooth DAC / AMP. Unfortunately, the Bluetooth standard is still limited to 4.2, not the latest 5.0.

Hiby R5 will be running on the Android Oreo 8.1 platform customized like on Hiby R6 Pro. It’s still equipped with DTA architecture bypass the Android audio processor which sends the signal directly to DAC for the most intact signal.

Tested playing music through TIDAL did not have any problems even when playing in TIDAL Master mode. Although Hiby R5 was not introduced as MQA support, in fact, with DTA architecture you can expect that your sound will reach 96kHz via TIDAL.

Overall, Hiby R5 is quite neutral, smooth, and balanced. The sound has good dynamics, depth, and ability to separate the instrument well. However, when I listened more closely, I felt that the timbre of the instrument from the low range to the mid-range was neutral but the high band seemed a bit brighter than usual.

Happily, the background of Hiby R5 is very quiet and clean. Testing with 64 AUDIO U18t, almost no hissing sound appeared in low-gain mode. Even in high-gain mode, background noise is kept to a very low level when using the Balanced 4.4mm port.

The bass range of Hiby R5 is deep and has a good body, fast, compact and less drag. The bass is quite natural, filling the space perfectly and separating from the mid and treble strips. The bass retains good dynamics even at low volumes. The mid-bass area is energetic and gives quite a realistic drum experience. There was no sign of a lack of control over the strip.

The vocals and instruments performed on Hiby R5 are relatively thick, clear, smooth, and high-pitched. The impressive detail seems to be due to the slightly increased influence of the treble band. Female voices and musical instruments in the high mid-range are soaring without harsh glare or sibilance. Male voices are also natural and heavy. In general, the mid-range of Hiby R5 does not sound too dry but not too wet,  which feels harmonious and pleasant. It has the ability to separate musical instruments in the stage and singers do not have too much space like the flagship Hiby R6 Pro player but it is more than enough to keep the composition separate, not mixed together.

I found Hiby R5 to be more intimate like a tea room than a grand one. The ability to separate the instrument is really good, especially when listening through the Balanced 4.4mm port. The position of the instrument is precisely located in the space, although the space between the sound sources is not too far apart. Singer vocals tend to be pushed a little forward but not to the point of being too close.

The timbre of the entire song does not change too much but there are clear differences when listening through the 4.4mm port.

The ability to layer and float the blocks of an instrument in a song is shown more clearly. The height and depth of the stage improved but the width didn’t seem to change much. The sound of the instruments becomes more definitive, more solid thanks to the doubled power of the 3.5mm single end port. On the Single End port, the sound sounds intimate and a bit smoother.

Despite having a small body compared to other similar music players, Hiby R5’s power and sound quality are worth a try. With the ability to improve both hardware and software, it is difficult to catch errors on this product. Not to mention that Hiby is a great software company when it regularly releases updates to fix and improve the performance and sound quality of the machine.

If you are looking for a $ 500 compact, solid, detailed audio player, with 4.4 and Android port, Hiby R5 is a great choice.

where can you get a Hiby R5 online