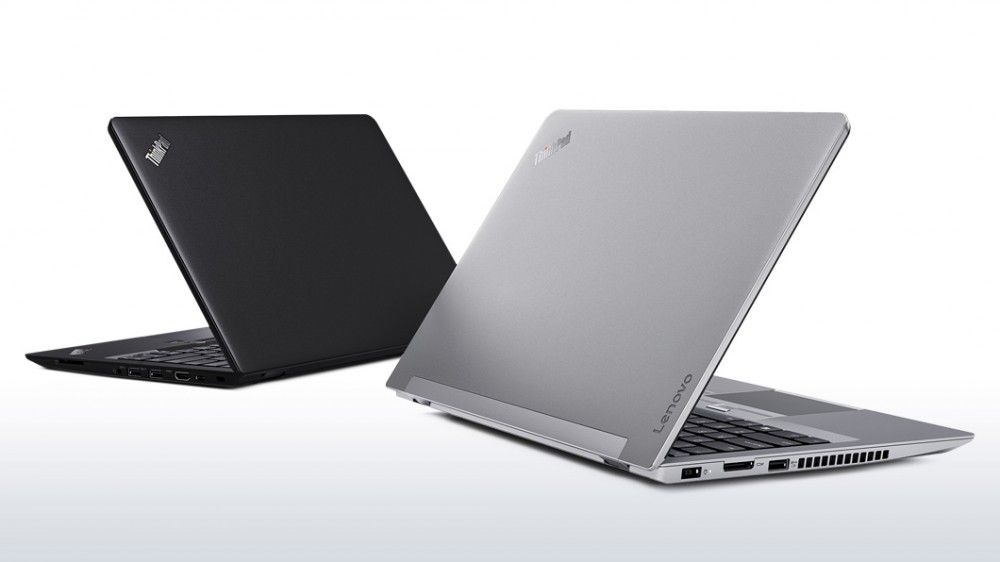 Located between Lenovo’s ThinkPad flagship line and Lenovo’s IdeaPad mainstream, the ThinkBook 13s is a welcome new wind of this laptop brand as it has a modern design that is suitable for young people without having to swap features. Essentials such as security, reliability and professional support services.

The first impression of Thinkbook 13s is that it exudes a modern, high-class silver-gray color with aluminum-magnesium alloy material on the entire body. Typically, ThinkPad laptops will be black, rarely having a silver color option. Lenovo tested the dark gray, but they changed their decision after only two generations of ThinkPad. Individuals who like gray-gray laptops, for example when working in a certain coffee shop, look very cool.

The edges of the machine are CNC machined, both bring a sleek look and make the grip feel smoother.

Overall, the ThinkBook 13s is thin, light, weighing about 1.34 kg and maximum thickness of 15.9mm. These numbers are less likely to be equal to some other ultra-thin laptops, such as LG Gram, but it still ensures portability with one hand, which is enough for most users. In addition, while light and thin, the ThinkBook 13s feels solid, not bent (flex) despite applying strong force.

The hinge is an interesting point on the ThinkBook 13s, when Lenovo designed half of it with the chassis, half in the back of the screen. This design allows you to tilt the screen up to 180 degrees from the camera body, making it easy to adjust the viewing angle or display the content displayed to the opposite person. According to the manufacturer, hinges are made of zinc alloy, and Indium and Stannum coating simultaneously increase resistance to corrosion, helping the machine withstand 25,000 cycles of opening and closing in laboratory conditions.

However, the hinges hold the screen very tightly, and users won’t be able to open the screen with one hand, causing a bit of inconvenience during everyday use.

The number of ThinkBook 13s ports is only acceptable, including an HDMI port, a Type-C 3.1 Gen 2 USB port, a 3.5mm headphone jack and two USB Type-A ports 3.1. Without an Ethernet port to ensure thinness is a sympathetic factor, but it’s unclear for what reason Lenovo doesn’t have a built-in memory card slot, users who often take photos like me will feel very inconvenient. The Type-C USB port also does not support the Power Delivery USB charging feature, but only for data, image and audio transmission, while the slim-tip charging port retains inherent elimination on most ThinkPads. In addition, ThinkBook does not support Thunderbolt 3.

On the underside of the machine is a large-size heat sink hole for a laptop without a discrete graphics card. On both sides of the device is the Harman Kardon range of speakers, though high in volume but of medium quality, the bass band is almost impossible to perceive. Headphones or external speakers will be more reasonable choices.

The screen responds well to the needs of work and entertainment

However, one thing that can be said to cause a loss in the ThinkBook 13s screen is that the two sides of the screen are thin and the edges are a little thicker but still acceptable because they contain a webcam, the lower edge of the device is very thick, especially if compared to 2019 standards.

Speaking of webcams, the ThinkBook is also equipped with ThinkShutter, which is basically a slider to cover the camera when not in use but still ensures aesthetics, instead of having to tape it with tape. This is a particularly useful feature when privacy is a global problem.

In terms of quality as well as the typing feel, the ThinkBook 13s keyboard has almost nothing to blame. Keycap large size, neat fonts, when typing with a light clicky, average key journey. The key also has monochromatic LED lights for working at night and equipped with water overflow protection. It is noteworthy when the phone has both Skype Hot Keys dedicated hotkeys that allow to receive or reject calls via Skype with the click of a button. One point to note is that the key surface is slightly raised above the camera body, which can cause dirt to easily get into it.

The device’s trackpad is large in size, feels good, fast and smooth thanks to Microsoft Precision support. The surrounding chrome border also makes it more eye-catching.

Towards office users and small and medium-sized businesses, security is also a factor to be addressed. Besides ThinkShutter for camera and fingerprint sensor, the ThinkBook 13s also integrates some utilities such as Fast Identity Online FIDO authentication, dTPM 2.0 security chip that encrypts and stores user information on separate chips. Instead of the cloud system, or Lenovo Vantage software provides a set of hardware analysis tools to detect errors early, personalize hardware settings and automatically install important updates.

In addition, ThinkBook is supported by many enterprise-level services including Lenovo Premier Support, extended or upgraded warranty terms such as on-site support for the next business day or international warranty service to minimize equipment repair time. These are things that will be useful for small and medium enterprises, which often do not have a separate support team.

where can you get a LENOVO THINKBOOK 13S online

Regarding configuration, the ThinkBook 13s version of VnReview is equipped with the highest options with Intel Core i7 8565U chip, 16GB DDR4-2400 SO-DIMM, 512GB PCIe NVMe SSD but no discrete Radeon RX 540X graphics card that only Intel UHD Graphics 620 integrated graphics core. The i7 8565U chip has 4 real cores, 8 streams, 1.8GHz basic pulse, can turbo up to 4.6GHz, 15W heat escape capacity (TDP).

This configuration of the ThinkBook 13s provides agile performance in most tasks that I often use, such as browsing the web with about 20 tabs, editing images with Lightroom, Photoshop or including Full HD video editing with Premie Pro.

Try PCMark 10, a software that evaluates the overall ability of a computer, from chips, RAM, hard drives, graphics cards, work, entertainment, etc. with a quick review ( Express, photo above), the ThinkBook 13s reached 4551 points, while the detailed (extended, below) review with the gaming performance, the score of this laptop dropped to only 2676 points.

Evaluate CPU single-core and multi-core rendering performance with Cinebench R20. It can be seen that the Core i7 8565U chip has the power not to be too far from the 4th generation HQ chips, but TDP is only 15W, more energy efficient and cool. For example, the TDP of the i7 4850HQ chip is 47W, which is 3 times faster.

Without an Ethernet port, Wifi speed is very important on the ThinkBook 13s. It supports 802.11AC Wifi connection (2×2), when measured through Speedtest site, the speed is almost no difference compared to when using wired network on another PC.

As a laptop for work, Intel UHD Graphics 620 integrated graphics chip with Core i7 chip, 16GB of RAM and PCIe SSD still help ThinkBook 13s to meet gentle online games like League of Legends or Fifa Online 4 lets you entertain yourself during breaktime.

At the highest graphics setting, UHD Graphics 620 can be maintained at 60FPS in the early stages of the game and falls to 40-45 FPS when fighting. If you reduce the configuration a bit, FPS stability above 60 is possible.

With Fifa Online 4, the writer has to reduce the graphics setting to a low level for a smooth experience. Pushing the setting higher, the FPS will drop to about 25-30 and there will be jerks and lag.

Temperature is always something that users have to sacrifice when using lightweight laptops. In air-conditioned rooms with room temperatures of about 27-28 degrees, ThinkBook 13s CPUs range between 70-72 degrees when playing League of Legends and Fifa Online 4. However, when testing the benchmark with the CPU Burner included in Furmark , the chip only maintains the maximum pulse level for a short time, the maximum temperature reaches 88-90 degrees, and then is reduced to maintain the temperature to below 70 degrees C.

The ThinkBook 13s is equipped with a 45 Whr battery, according to Lenovo, it can work up to 11 hours after each charge. If this number seems modest to your needs, the ThinkBook 13s is also equipped with RapidCharge fast charging technology with the ability to reach 80% of the battery life in a single charge (must use a 65W charger to buy more). The charger that comes with the writer’s device has a capacity of 45W, compact, carrying along is not a big problem.

Using the fact, the ThinkBook 13s responds well to a writer’s 8-hour workday, including surfing the web, watching Youtube, playing League of Legends during a coffee break (about 30 minutes each), and the rest weak to use Word and Excel. At 6 pm when I got home, there was about 15% battery left. Total usage time is about 9 hours.

Measuring the ability to watch movies continuously with John Wick 2 Blue-ray 1080p with a length of about 2 hours, after watching all three times, the device has 20% battery life. With a 45W charger, after 1 hour, the charger can charge about 60% and it takes another 50 minutes to fully charge the battery.

The ThinkBook in general and the ThinkBook 13s in particular are a step in the right direction of Lenovo. Thin and light trends are happening everywhere, from smartphones, TVs to laptops. Pity laptops will gradually lose their footing, but not everyone can afford to invest in ThinkPad flagships, especially small and medium businesses or office users.

Modern design, beautiful screen, powerful performance and “strong” battery are the worthwhile points of ThinkBook 13s, and if Lenovo can improve the screen border and increase connectivity, we will see a formidable opponents make other brands wary.