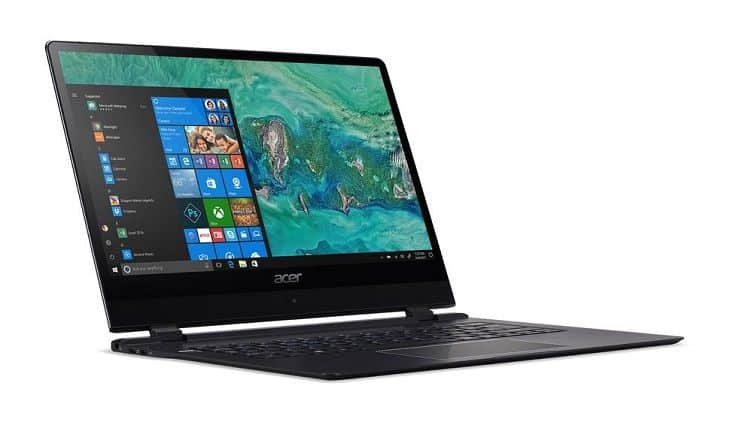 The Acer Swift 7 laptop can be said to be the thinnest and lightest laptop today. Weighing only 890g and 9.95mm thick, this laptop surpasses Apple’s latest 12-inch Macbook. Even lighter than the iPad Pro with a smart keyboard up to 150g.

Swift 7 is equipped with a 14-inch touch screen. This is not a compact laptop for easy portability, this laptop is designed for ultra-thin and ultra-light high-end computers.

In theory, Swift 7 has everything to become an ultra-thin and lightweight high-end laptop such as Core i7 processor core, 16GB RAM, 512GB NVMe memory, and two USB Type-C ports Thunderbolt 3. Inside the box is There is a slim bag and an extra connector (add USB-A and HDMI ports).

Swift 7 is available in two colors, white or black and you should choose white. Unlike the black version, the white version leaves no fingerprints or blurs so it will look cleaner.

Swift 7 is surprisingly light in weight and we can easily take it from one place to another, even so light that you may not even remember to leave it in your bag. But because it’s so thin and light, Swift 7 feels less rugged than other laptops at the same price. Acer uses aluminum-lithium and magnesium-aluminum materials to make the case, “they’re lighter and more sturdy than conventional aluminum in the same thickness”, but the real experience shows that Swift 7 is still not as sturdy as it is .

We the feeling of insecurity when holding this device: “The first Swift 7 I experienced a blue screen flicker even though it hasn’t dropped or bumped “The replacement that Acer sent later did not see the problem again after a few weeks of use, but I still feel insecure whenever I throw my laptop into my pocket a little strong.”

Ignoring the problem with the first laptop, this laptop’s screen is impressive. It is 14-inch in size with a small screen border on the top and two sides. With 1080p resolution it gives the image a sharp and vivid look, and has a good viewing angle.

This laptop is equipped with a touch screen, but unfortunately it is not very sensitive, often having to touch the screen twice so it can be recognized, especially when it is not frequently used. Like the monitor controller has a standby mode and needs to be awakened before it can function smoothly.

Looking around the screen border, you’ll know why this laptop can be so compact, because it doesn’t have a webcam. Instead, Acer incorporates Dell’s XPS 13 laptop and Huawei’s MateBook X Pro to create a “Show-hidden” camera on the left side of the keyboard. Not surprisingly, the camera quality is bad, when calling a videocall, it just catches the finger on the keyboard or just to the middle of the user’s chest. Therefore it is almost useless for all tasks that require a webcam.

Because the webcam cannot be used to log in with the face, Acer has integrated a fingerprint sensor under the power button on the left side of the keyboard. The experiment showed that the fingerprint sensor was quite good, but when updating to the new Windows version, the computer completely “forgot” that it had a fingerprint sensor. Back to the old version will fix it but to find the error it takes up to half a day.

The Swift keyboard is another example of a trade-off for size. To be able to cram as many keys as possible, Acer has changed some common key positions that can make it difficult for users to get used to. The capslock button is only half left, the navigation key is surrounded by home and end keys, and the worst is the backspace key right next to the delete key. Not to say, you also know that this is very easy to lead to press the delete key every time you press backspace, or press the home / end button wrongly when you intend to use the navigation key to scroll text or move pointer.

In addition to the key layout, the keystrokes are only fine, not different from other machines. The key on Swift 7 is not very deep, so it doesn’t feel “perfect”, but in return the keyboard on Swift 7 has backlight and reasonable spacing between keys.

Similar to the keyboard, the trackpad is oddly large, making it quite responsive and smooth. But they can’t distinguish between fingers and hands, the feature often comes with large size trackpads, so the mouse pointer often jumps every time you type.

Inside, Swift 7 uses the 8th generation Core i7 chip without fan cooling along with 16GB of RAM. Similar to the type of chip used in Y series, it is not too difficult to detect the limit of this fanless radiator chip, even for everyday applications like web browser, email, Slack or Office. If you don’t run multiple applications at the same time, the processor may work fine, but if you use multiple applications at the same time, the Swift 7 will quickly overheat.

The design without a fan helps the laptop not make any noise when running, but it makes the keyboard heat up, especially near the charging port on the right. It’s not hot enough to cause burns, but it certainly makes me less comfortable using a computer with a heat sink.

Below there are two speakers with medium sound quality. The volume is quite small, thin, slightly opaque and without bass. You will need to use the headset regularly.

Finally, Swift 7 has an average battery life, only about 6 hours of actual use. Although there is no hope in a thin laptop like this, it does not mean you do not need it to work all day or during an international flight. A serious problem is that Swift 7 does not receive power from any charger other than charging with the device, including cables and USB-C chargers over 45W. This means that even though the device is very thin and light, you still have to carry a “heavy charger” to power it because we can’t charge via USB-C or other adapters.

The goal of Swift 7 is quite high: it is to create a super slim, ultra-light and more portable flip laptop. However, the laptop’s tradeoffs for mass and size are too big. Instead, it is better to say that the device weighs 300g and the thickness increases 0.5cm to have a laptop with a better keyboard, higher performance, better grip and can use webcam, then still more worthy.

where can you get a ACER SWIFT 7 online