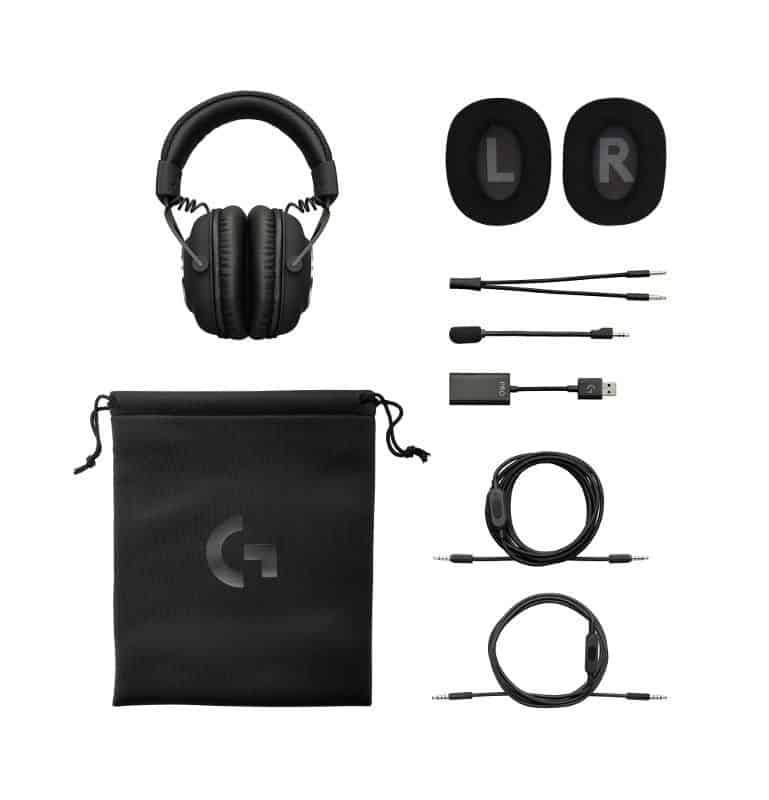 Logitech Pro X – Logitech is a long-standing gaming accessories manufacturer known for its bold technological innovations, as usual, continuing to upgrade its product models every year with a range of innovations to bring gamers interesting, novel but also pragmatic products.

Among the products that are “launched” this time can be mentioned to the headset line for Logitech Pro X gamers who received the most bright upgrades compared to the previous version.

Unlike other “light upgrades” in terms of packaging, style, or type of driver included, this release witnessed a radical “makeover” of the Logitech Pro headset line with a completely new design. , make sure feeling and “professional” than.

In the context of more accessories manufacturers starting to attack headset products for gamers, this is a bold move by the company to completely change the design language on the mainstream. Power, separating it from the rest of the products with a design geared toward professional headphone products.

Will the changes and upgrades make Logitech Pro X become “more valuable” in the headset market for gamers who are in fierce competition?

Although a manufacturer of accessories for gamers “famous” for a long time, but one feature that I do not like much about the Logitech headset line is that it uses the design used. too much … plastic, though light, but lacks the feeling of durability and elegance like other “music” headsets.

But this has been significantly changed by the company when it comes to the line of professional headphones for gamers launched this year.

The overall design of the new Logitech Pro X headset this year reminds a lot of Beyerdynamic products with a large head cushion, two earphones mounted on a thick metal frame with electrostatic paint painted black. U-shaped and adjustable size, the headset can fit any “head size” with a moderate pressure, creating a certain tightness for diaphragm to promote “power”.

On a side note, the Pro X version is completely similar to the Pro version, with the exception of a few different accessories such as metal earcups, two fabric ear cushions to replace the original two leatherette cushions with the box … is twice the size of its “brother”, so users who want to experience the product without having to spend too much money on accessories can choose the Pro version to reduce costs.

Using a lot of metallic and leatherette materials, Logitech Pro X feels more solid and luxurious, but this design also … sacrifices the ability to fold flat (fold flat – the ability to bend the ear canal 90-degree angle to wear on the neck when not in use) of its predecessor, which is designed to be similar to the Sony MDR-100AAP universal headset.

The ear cushions are made of good quality leatherette with quite large size, enough to cover the ears of the majority of users, the seams are also made quite carefully making the “aesthetic value” of the headphones was raised to a new level, closer to the “specialized music” headphones than the “specialized” gaming headphones today.

Material foam cushions are also used quite thick and soft material, tightly hugging the entire speaker driver close to the user’s ear but still not causing the feeling of ear flutter or discomfort when worn for a long time.

This pad on Logitech Pro X feels very similar to the ear pads on the Bose QuietComfort 35 series of headphones with very good external sound insulation, but in return, it is quite tight and easily causes heat to be worn when worn on the inear long time.

The other details are manufactured very carefully according to the standards of a current “gaming” headset such as 3.5mm cable connector wrapped fabric anti-broken, gold-plated connection, removable microphone can be easily removed / built-in noise filter and a volume control remote are integrated.

The second highlight of Logitech for its “flagship” product line is a mini sound card connected to a computer via the familiar USB Type A port to replace the sound chip integrated with the sound quality just in line … for yes, not enough to show the strength of Logitech Pro X gaming headsets.

In addition to providing the ability to decode signals (DAC – Digital to Analog Converter) and amplify the signal (Amplifier) as on traditional sound cards, the product comes with the headset also owns an additional signal processor DSP (Digital Sound Processor) to handle sound effects for the headset.

This sound card is just the size of a match, but is also capable of processing audio signals in accordance with DTS 2.0, simulating 7.1 surround sound to create a realistic space effect, satisfying the “followers” of movies and action games that require accurate spatial repositioning.

With only the depth changes that make a strong impression right from the opening of the box, Logitech Pro X “gaming headsets” show a promising start with many notable quality highlights.

It must be said from the beginning that Logitech Pro X is a “gaming” headset, so Logitech has focused on adjusting the sound in a way that will please gamers, that’s why it will be difficult for you to ask too high In terms of sound quality of the headset when used to “enjoy” music.

where can you get a Logitech Pro X Gaming Headset online

The bass has always been a highlight for headsets for movies and games, but very few “gaming” headsets create the bass range as impressive as Logitech Pro X because of the limitations of the audio chips. The integrated bar is currently not powerful enough to represent the full range of bass.

With an amplifier, the bass range on Logitech Pro X is very strong, quite powerful and you can even feel the vibration coming from the G-Pro drivers up to 50mm in the explosions, the sound of a roar, or cracking sounds … is enough to make the listener feel as if he were sitting in a theater.

Mid-vocal range is slightly dominated, while high range (treble) can only reach up to about 15,000Hz, which is partly enough to satisfy most of the film and game needs of users.

If compared to an ASUS ROG Strix Fusion 700 in the same segment, Logitech headphones give sound better than movie and game tasks, but a bit inferior when it comes to light music that requires a mid range. clear sound.

Most impressive is the ability to reproduce the standard DTS 2.0 space of Logitech Pro X headphones for the purpose of simulating stereoscopic 7.1 sound through the DSP audio decoder chip.

To be able to set up this feature, users must install Logitech G Hub and open the option “Surround Sound” with the ability to customize the volume of the virtual satellite speakers.

When this feature is turned on, the ability to reproduce the spatial effect in the sound of movies and games becomes much clearer than it is in normal 2.0 mode, especially for DTS audio-standard movies. 7.1 or games that support this audio standard make it easier to create a sense of spatial precision than movies and games that support only two conventional channels.

In this respect, it can be said that Logitech Pro X carries more or less the “direction” of Sony’s “professional” line of headphones, MDR-HW700DS for a much more “affordable” price.

Microphone quality is also extremely impressive when it comes to delivering clean voice quality thanks to Blue Voice technology, reducing background noise. This feature has a relatively good effect, quite close to the ANC (Active Noise Canceling) feature on the AORUS CV27F tactical gaming monitor that the group has introduced to readers.

At its price point, Logitech Pro X is quite good in terms of design and features, but there are still a few small issues that need to be improved to bring a better user experience.

The first problem lies in the sound card’s ability to reproduce the surround sound of a slightly narrower soundstage.

When you put on headphones and turn on the surround sound emulation feature, you will feel like sitting in a small cabin with speakers around, easily causing the feeling of fatigue if you have to listen for a long time.

This problem can be partially solved by changing the cloth earphone cushions included in the box. Fabric cushions help lessen the bass sound better, making sound space less cramped, but you will have to sacrifice more or less sound quality.

The second problem lies in the solid design, but somewhat heavy with the long cord and the included USB sound card, Logitech Pro X is now no longer too convenient for “traveling” as with the version before, though, the company still gave the buyer a cloth bag.

You will feel cumbersome when carrying the product, difficult to wear longer because of the pressure of the metal frame and do not enjoy all the great features of the product if you do not install the control software when using strange machines.

Anyway, these issues are quite small and do not affect much to the user experience. It can be said that Logitech Pro X is a very bright product for gamers in the mid-high-end gaming headset segment.