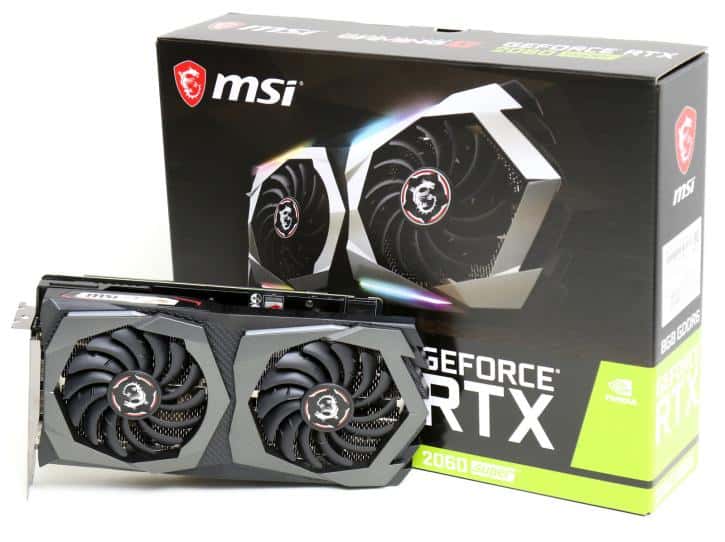 Over the past few years, MSI’s high-end graphics cards for gamers have been known for their “big and long” design with the Gaming X Trio design featuring three large fans and a huge heatsink with 5 heat pipes throughout the “oversized” aluminum foil, but coming to MSI RTX 2060 Super Gaming X, the company uses only an extremely compact mid-range design.

More precisely, this is a re-used design from the MSI RTX 2060 Gaming Z version released earlier this year with two large Twin Frozr 7 cooling fans on the surface with a dark mask and the Wave “cleft” heatsinks to increase exposure to airflow in a confined space.

At first glance, Gaming X cooling design shares a lot of the basic features of the lower-cost version of Ventus, but when you go into details, you will see MSI’s “care” for it with lots of exquisitely machined parts.

Plastic front panel is used traditional fin pattern with strong fan edges and large amount of RGB LED backlighting is arranged around this panel instead of “exposing” directly as on the Gaming X Trio version, create beautiful lighting effects.

The back of the MSI RTX 2060 Super Gaming X is also equipped with a beautiful laser-engraved back plate. In fact, this armor plate is more of a decoration rather than a “support” for the PCB circuit board to prevent bending, against the weight of the “heavy” radiator.

Having just two large fans and a medium-sized heatsink, that doesn’t mean the cooling of the graphics processor is worse than the three-size Gaming X Trio fans.

In real-world gaming tests with the MSI RTX 2060 Super Gaming X, the maximum temperature measured was only about 65 degrees Celsius after nearly 1 hour of heavy games like Battlefield V or Gears 5.

When tested with the “heavy” stress test, such as Furmark, the processor’s temperature remained very stable at 66 degrees C after a period of continuous operation at 100% and the fan did not show any signs “Overload”.

Overall, the design of the MSI RTX 2060 Super Gaming X can be seen as a beautiful, compact product that fits most most mid-range gaming cases but still retains the effective heat dissipation fame ”of the Gaming card series comes from the red dragon team.

Still following the “Gaming” standard of MSI so far, the MSI RTX 2060 Super Gaming X owns a RTX 2060 Super graphics processor that is only slightly overclocked, and even has little difference in strength compared to the power reference version.

In the original mode, even after running Turbo Boost, the graphics core clock is only 1680MHz, slightly different from the 1650MHz of the reference version, so if you only buy – plug in, the power of The product is only on par with some other light overclocked versions on the market such as Gigabyte RTX 2060 Super Gaming OC 8G that Biareview has introduced to readers.

At the standard performance level, MSI RTX 2060 Super Gaming X reached 19,505 points 3DMark Fire Strike, not much difference with the level of 19,282 on the counterpart from Gigabyte, while in 3DMark Time Spy test on DirectX12 platform , the system only reached 8,640 points, followed closely by the score of 8,708 points from “rivals”.

Similarly, with the 3DMark Port Royal test exclusively for rendering using Ray Tracing technology, the system uses the “red dragon” team product to score 5,126 while the “eagle” team is still equal with 5,166 points.

However, the advantage of MSI RTX 2060 Super Gaming X comes from the powerful overclocking ability of the product and the famous MSI Afterburner software. With only a few gentle settings, users can completely stabilize “pull” the product power by 5% to 7%, while the OCer can do more than just with “zin” cooling fans that the company has equipped.

Coming to the “gaming”, when at the default pulse level, MSI RTX 2060 Super Gaming X proved to be on par with the Gigabyte counterpart in most tests, except for Total War: Warhammer 2 with the results preferably tested when the driver has been fully updated.

With some “tricky” games like Shadow of the Tomb Raider or Battlefield V with Ray Tracing rendering mode, the product from MSI even produced slightly better results.

Overall, the standard power of the MSI RTX 2060 Super Gaming X is already quite good enough to handle modern games at the highest settings at 1080p, while, with only a few taps Overclocking gently, you will get a machine with the power “wildly”, enough to “knock out” most of the same products in the segment.

“Good” in terms of design and power, but the MSI RTX 2060 Super Gaming X still faces some general annoyances of the entire RTX 2060 Super graphics card such as the power limit feature.

In fact, this feature pretty much limits the ability of the product to overclock despite other objective practical conditions such as chip quality, component quality, and cooling capabilities are “ready” for users to overclock pulse to aches higher.

Therefore, for the average user, you can overclock MSI RTX 2060 Super Gaming X to 5% to 7% with about 100MHz to 120MHz for core clock, but if you want to overclock higher than this level, unless You are a “professional” OCer knows how to use BIOS mods and some other tricky “manual” tricks that can damage your device.

In addition, another minus point comes from the high price of the product when compared to other products on the market that use the current RTX 2060 Super graphics processing chip, even this price is closely the MSI RTX 2070 Super Ventus product with more power.