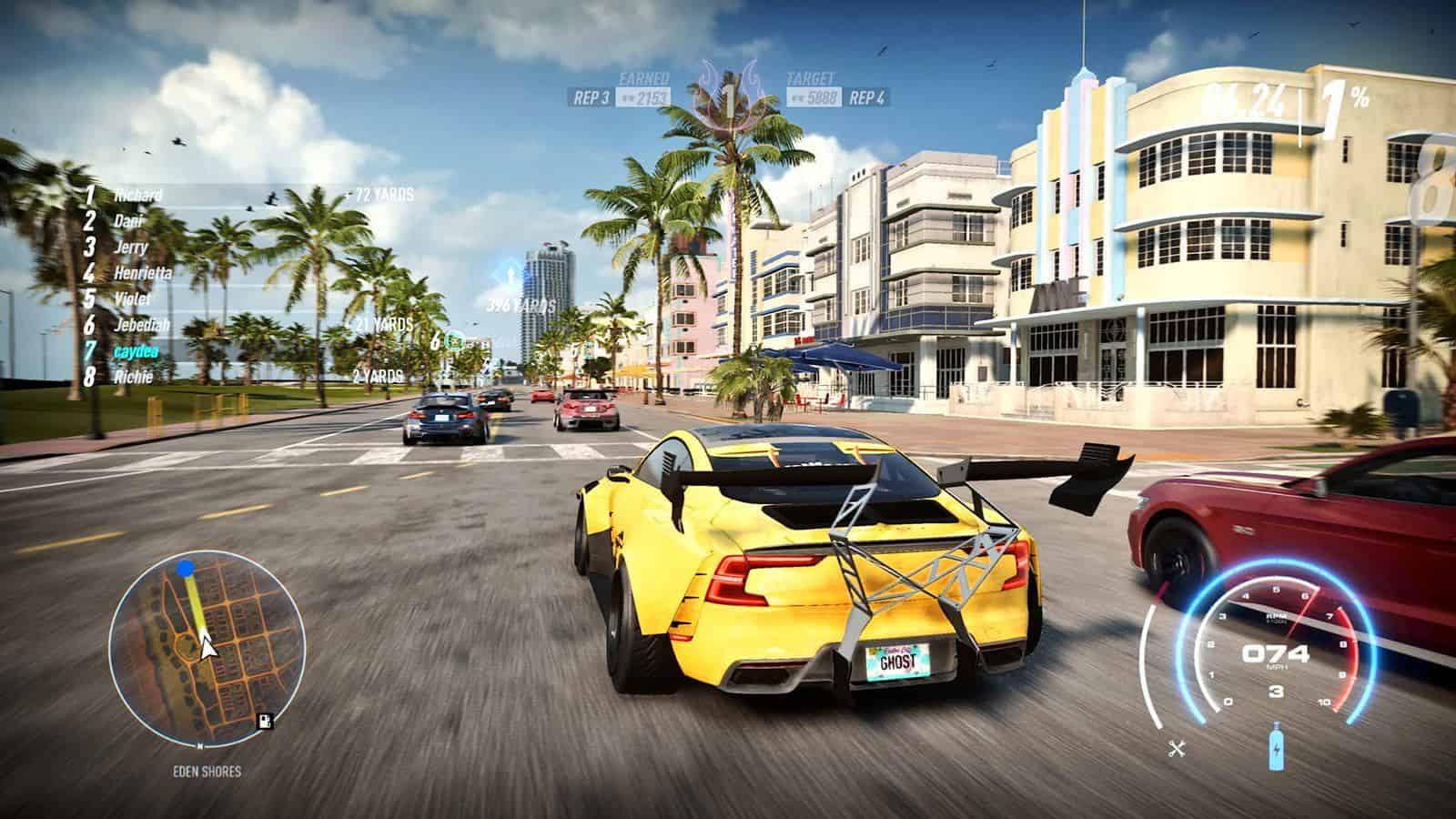 The classic version of Need for Speed ​​has always pursued two fixed schools: focusing on “fights” between silk drivers and police, or bringing speed banquets into the night of underground racing cultural. The reason for this split is due to the early success of the two versions Underground and Most Wanted (2005), leading to some modern Need for Speed ​​titles despite trying to blend the two styles together, often lean more in one direction.

With Need for Speed ​​Heat, Ghost Games really wants to separate these two schools and give them equal investment, but not really … very successful.

“Palm City” is the destination of this series, featuring blue / purple tones from the Miami neon richness and abundance. During the day, it contains fast-paced competitions with lovely, “fun-to-play” rhythms and professional arrangements. But at night, spontaneous races flourished, there were no roadblocks, civilian cars sprung up in the middle of the road, and of course the police were ready to whistle.

The separation of the time of day gives Need for Speed ​​Heat two opposing atmospheres that exist in tandem. In the light of the day, you can make money to cover your driver through the races or challenges scattered on the map, and this is also the best time to explore Palm. City, open a map, find a garage location to facilitate quick transfers, and attend some events that only take place in the morning.

The night is a completely different story, as players “joint” into the night through a single button and the reggaeton sound is pushed aside for the beat of hip hop and dubstep. You will not stop at the end of a race, the police will always start chasing if you see you, and your vehicle’s health bar can only be restored up to three times each time running through the gas station (maybe be corrected if buying corresponding vehicle equipment).

Need for Speed ​​Heat’s night play is much more dramatic thanks to the chases that can be extended to the liking of the player, as well as the police’s “trenchant” significantly increased from the version Payback. Night races or chases with the police also help increase REP points to “unlock” cars, parts, as well as new story missions, so it can be seen that Need for Speed ​​Heat is still quite biased in the night play part.

It is fortunate that whether you prefer to race at night or during the day, the main story, though not as bad as brain pain as Payback, is not worth paying attention to, can be ignored or not requires you to spend too much time monitoring it.

The “artiste” of Need for Speed ​​Heat is completely within the expectation of a racing game in 2019.

Still the Chevrolet, Lamborghini, Nissan and Porsche bring to their A-class cars, as well as the indispensable presence of Ferrari – a brand with high pride and also quite a racing game market. Great. However, as a game with a retro synthwave art, the writer was quite disappointed that the classic car of the game was not really improved compared to previous versions.

Still a Dodge Charger, still a Ashton Martin DB5, still a “tiny beetle” of the Volkswagen family – cars so popular that even non-connoisseurs remember their faces. Those who expect a super car frame will be fully satisfied, but overall, the frame of Need for Speed Heat can completely and deserve improvement.

Ghost Games promises to have new retail box driver packages in the future replacing the microtransaction model, which is not acceptable in Payback. Hopefully this model will pave the way for Mitsubishi, along with many other brands and unique cars, to Need for Speed ​​Heat.

The driving style in Need for Speed ​​Heat trades off a little of Payback’s speed in order to gain a reasonable level of control for the player.

The biggest change is that the car is not assigned to the same category as before, and each car can be customized to suit the needs of the player. A Mazda MX5 with all the Grip will launch at full speed and cornering naturally, while the Dodge Charger only needs a set of Drift tires to sharpen the wheel all day, and of course you can navigate the car to balance both sides.

The car upgrade system in Need for Speed ​​Heat is modified positively compared to Payback. Farewell to the Speed ​​Card, goodbye to the training, and the farewell of the lottery draw to get the vehicle parts. This time, you just need to race, make money, upgrade REP, unlock new parts, buy parts, attach to the car and all. Simple, easy to understand and classic.

You can also change the entire engine of the car as long as you have enough money and REP requirements, breaking the original level of the car, so that each of your “car” will never become Obsolete no matter how long you play.

Vehicle tuning and personalization are still quite meticulous, in which the game allows you to turn the gas in the garage. This works in tandem with a new function – adjusting the sound of the exhaust and engine. The first time in a game Need for Speed, you are free to decide how hard your car’s “roar”.

Interestingly, a function that is not even considered even in simulation games appears in a “for all people” game like Need for Speed Heat.

As mentioned above, Need for Speed Heat tries to balance the play and atmosphere during the day and night, but ultimately it gets more night bias. Surfing in Palm City among the skies dotted with purple, especially if it was raining, really brought the classic Underground tone to the people.

In contrast, daytime driving does not give the writer any fixed emotion. It has no festive atmosphere on a par with Forza Horizon, the lighting does not have the same lines and style as the night, and the technical weaknesses in the graphics are gradually revealed.

If you hate “cinematic” effects like Film Grain and Chromatic Aberration, be prepared with Need for Speed ​​Heat, as it has no settings to turn them off. In addition, the game’s graphics seem to be subjected to a sharpening layer that over-sharpens, making everything look not smooth and reduces the detail on the object.

The last problem is the uneven difficulty level in Need for Speed ​​Heat.

No matter how hard you play, the AI ​​phenomenon is so far behind you that it is impossible to catch up, which is what happens like a meal, even if you have perfect cornering or continuous nitro use furthermore, making wanting to win means always having to find a way to get to the top 1 right after the race. However, if you are leading, the ability to distance your opponent to 1,000 miles is also … easy.

where can you get a Need for Speed Heat online