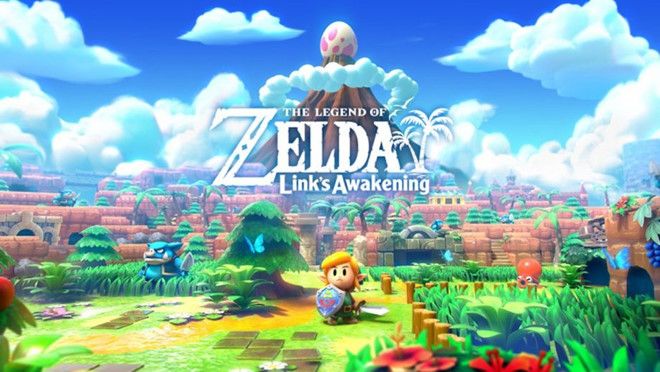 Briefly talking about the context of The Legend of Zelda: Link’s Awakening, this version temporarily takes Link character from the Hyrule kingdom and the “magic tricks” of the evil god Ganon, to come to Koholint Island – where every which only exists in the dream of the Wind Fish.

To awaken Wind Fish and escape from here, Link needs to destroy 8 Nightmare, Wind Fish’s nightmare and collect all 8 instruments to play the fairy song.

It should be added that The Legend of Zelda: Link’s Awakening has been released for a long time on the Gameboy Color system, so this “remake” version in 2019 does not have many changes in gameplay and logical thinking “classic”.

Generally speaking, nooks and crannies in the game will often be blocked by deep pits, rocks … that need special equipment to jump, to lift heavy objects … to be able to pass.

These can only be obtained when the player “decodes” the mazes in the game sequentially – so the absolute freedom like in the A Link Between Worlds or Breath of the Wild versions is definitely not available.

Of course, when “reviving” a game too “old-fashioned”, then Nintendo certainly must integrate into The Legend of Zelda: Link’s Awakening many changes to create a new one.

And fortunately, Nintendo is the type of game company that has a “mind”, so when offering the price of $ 59.99 quite “expensive” for The Legend of Zelda: Link’s Awakening, they also want to make sure that what the player receives will be worth at that price range.

First of all, can mention the convenience of the buttons. Remember in the old version of Gameboy Color, players can only assign all equipment to 2 buttons A and B.

Therefore, most of the time the two key equipment items that always follow the player are the sword and the shield, the other things only change according to the situation.

This is undeniable, when at the time of “a thousand and nine hundred back then”, the Gameboy Color system had only a mere … 2 A / B buttons, in addition to the D-Pad and Start / buttons Select.

Therefore, with the huge change coming from Nintendo Switch with lots of abundant buttons, The Legend of Zelda: Link’s Awakening has had many commendable changes, such as the integration of equipment such as “swords”, “divine power bracelets” and “speed shoes” into passive mechanisms, can be used by default without having to change equipment.

This move significantly improves the control of the player, helping them experience the game more comfortable and “smoother” significantly, compared to every little bit each “change” as in the past.

Next, it’s the old version of the past that only allowed characters to move in 4 directions “up and down left and right”, due to algorithm limitations as well as the layout of 4 D-Pad navigation buttons.

With The Legend of Zelda: Link’s Awakening, everything is created in 2.5D-close-3D style, with the absolute support of freely navigating analog sticks.

Not stopping there, The Legend of Zelda: Link’s Awakening is also actively improving the “mini-games”, in order to create great entertainment for players in addition to the minutes of finding the way and fighting brainstorm.

For example, the “grabbing” game, with completely new 3D physics mechanisms, controlling the crane to pick up items has become much more complicated, especially with 3D shapes and textures “4 fingers” of the crane, situations like picking up, falling down due to centrifugal force will appear quite “often”.

Finally, we can mention the most valuable improvement of The Legend of Zelda: Link’s Awakening this time, which is the extremely attractive maze game mode.

Each time the player completes a main maze in the story, they get a “collection” of the maze’s layout that can be used in free-maze-building mode via the Dampé NPC.

With the characteristics of the mazes must follow the rule of the first – last point (boss room), as well as the direction of the doors of the rooms is completely different, players will have countless options to build. Unique mazes “unique” to challenge yourself and your friends.

In the gaming industry, when it comes to the phrase “beautiful graphics”, it is common to think of Square Enix’s character designs or captivating cut-scenes perfect by Blizzard.

Indeed, the higher the technology develops, the more people tend to equate the concept of “beautiful graphics” with the approach to reality.

However, video games are an intellectual and creative product, and it should not have standards that go against such creativity.

As a result, countless games in the world have split up so many graphic styles, and it seems that regardless of the trending, Nintendo still quietly walks on their own path completely separate from the crowd – The Legend of Zelda: Link’s Awakening is a lively proof.

Historically, since systems with relatively “hardware” such as GameCube and Wii, The Legend of Zelda versions have tended to follow the 3D path with many different graphic styles.

With the “remake” version of Wind Walker on the Wii U and Breath of the Wild on the Switch, Nintendo has given players the most graphical experience possible, and miraculously, it completely belongs to the category of visual art is not confined.

With The Legend of Zelda: Link’s Awakening, Nintendo took a whole new direction, when they completely recreated a beautiful island of Koholint Island.

Choosing for yourself a “chibi” cartoon-style character style (head-to-body ratio 1: 1), the world in The Legend of Zelda: Link’s Awakening suddenly becomes so cute and funny when people Character types from NPCs, enemies to “bosses” are all shown extremely nicely.

Combined with extremely fresh and eye-catching tones, the graphics of The Legend of Zelda: Link’s Awakening even more captivates the player through each different scene.

From the peaceful and peaceful Mabe village; the plains covered with green grass; humid caves under the flare of torches … until 8 dungeons with completely isolated styles; everything is meticulously expressed, cared for – and even more special is that each tree, grass, rock, wall … are unified in a unique style that only in The Legend of Zelda: Link’s Awakening is available.

Every model in The Legend of Zelda: Link’s Awakening is created in full 3D, combined with a top-down view (slightly tilted) – combined, they create a truly visual experience. creative and new.

Combined with the exciting animation patterns of Link characters and funny monsters, The Legend of Zelda: Link’s Awakening make players immerse themselves in a completely isolated world and forget the whole thing real around me.