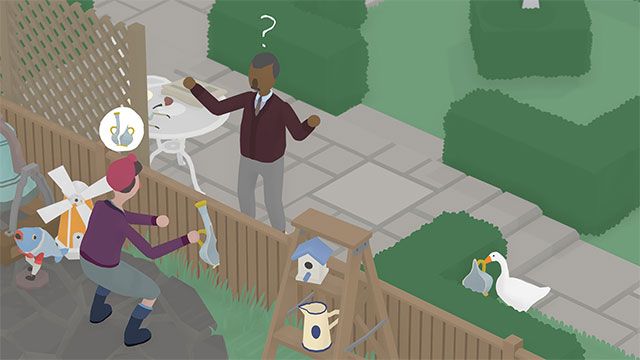 Untitled Goose Game puts you in the role of a goose and must perform tasks, most of which involve … theft or vandalism.

If you’re a human, you’ve probably been beaten to death by villagers, but fortunately, you are a goose so you have a “not die”.

This game can be played in only 16 minutes, if you know how to overcome these tasks, so we can see clearly, in essence, this is a puzzle game. If you know every answer, the puzzle is extremely fast to overcome.

However, the first time you play it may take hours. That’s how the game designed everything to make the mark.

For example, solving a problem of course can also be considered as a puzzle.

From all the data of the test, you sequentially follow the formulas you have learned, go from beginning to end, and the result is that you have won.

Many puzzle games are built that way, giving you enough data for you to infer the solution sequentially.

Each stage, the game gives you a dozen missions, but does not give you any data, but must learn by yourself, find, eliminate and test.

Simply, at the first task, you enter a farm and are tasked with being a new farmer.

But how many ways does a person have to change a hat … Dirty their hat? Throw it into the water? Throw away their hats? Wear a new, more beautiful hat in front of them?

You don’t know, and you have to try.

It is not very special, because the puzzle game is, it is normal to try to track … until you realize that the game not only wants you to try, but also plays for you.

You are a goose!

You can cry, you can run, you can snatch, hide, sabotage …

So, why try to focus on solving one problem, when you can run around, messing around, angering others, creating 10 other problems?

And that is the “weird” point of the game!

In the process of solving puzzles, Untitled Goose Game also gives you the freedom to do things that have nothing to do with your riddles or goals, but make you happy to be naughty, and Since then playing time greatly.

The game space is not large, probably covering a small village.

The sound of the game also does not “won the hearts” at all.

In short, after you’ve messed up enough, got used to the scenery, used to everything you saw, heard, and they didn’t have much, you would get bored.

But that is not too bad either.

Anyway, Untitled Goose Game is just like a slight dot, a funny puzzle game for you to relax simply.

Perhaps when you have overcome all challenges is when you feel you’ve experienced enough games.

where can you get a Untitled Goose Game online