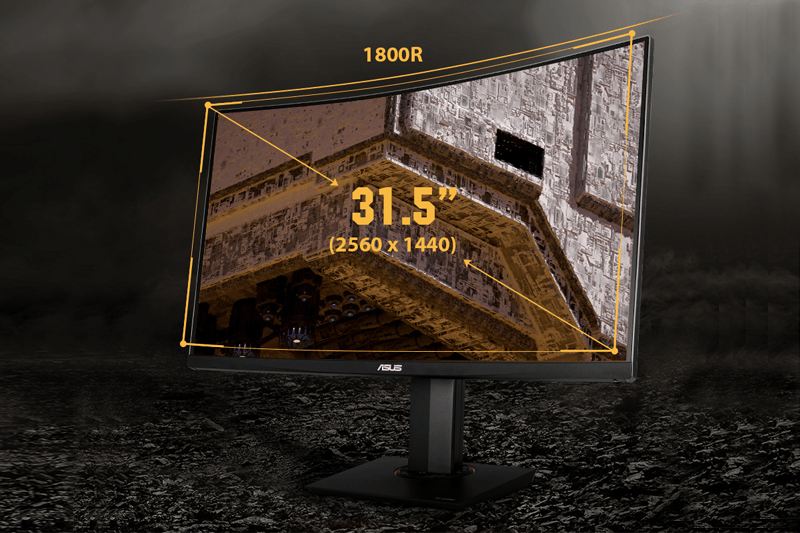 Unlike the XG series which inherits the “spacecraft” design of the previous ASUS ROG SWIFT PG348Q series, ASUS TUF GAMING VG32VQ inherits many elements in the design language of the PG or MG series as ASUS MG28UQ with a much simpler appearance.

The main feature of this design is the large quadrilateral base with flat base, although larger in size than the three-pin tripod design on the XG versions, but users can still take advantage of The surface of this stand to place other items should in fact, the product base does not occupy the surface of your table.

Comes with a flexible shaft, allowing users to lift – lower the display with open angles from -5 degrees to +20 degrees, convenient for people who are in the habit of standing when working.

Although the stand of ASUS TUF GAMING VG32VQ is not as flexible as other gaming monitors when it is not for users to rotate the screen 90 degrees horizontally, but for a curved screen with a curvature of 1800R, the feature This is not really necessary.

The screen has a lot of connections with two HDMI 2.0 ports and a DisplayPort 1.2b port, along with a 3.5mm port to output audio directly from the monitor without having to plug directly into the case, This is also extremely convenient for headphones with plug cord is not too long without the need for cables.

The screen is also integrated with two mini speakers with a capacity of 2 + 2W, making the product more flexible, serving various needs of users from watching internet TV, playing games to listening to soft music and entertainment. Sound quality just stopped at the level …acceptance.

With sizes up to 32 inches, with built-in speakers and a diverse number of ports, the product can act as a “strategic corner” all in one right on your desk. For example, you can connect the ASUS TUF GAMING VG32VQ to a PC to DisplayPort, while connecting consoles like PlayStation 4 via one HDMI and one TV box via the other HDMI port to be able to switch and flexible use.

Other details such as menu buttons, joystick joystick, or sink patterns on the screen cover are all made with highly machinable ASUS common style, creating moderate decorative accents, making the screen less monotonous on the back, creating the necessary highlight of an expensive technology product.

In general, the design of ASUS TUF GAMING VG32VQ is simple, not sophisticated, nor colorful, but still ensures the necessary beauty and flexibility in use.

Following the motto of focusing on the quality of the product rather than the colorful decorations, ASUS equips ASUS TUF GAMING VG32VQ with the best display technologies available today, delivering a spectacular performance for the game.

With a large screen up to 32 inches in size, ASUS’s decision to bend slightly along the 1800R circle is perfectly reasonable, which makes the user’s view is spread evenly on both sides, helping users feel more comfortable watching because the eyes do not have to change focus too much.

One of the first noticeable points is that the color quality is quite good, a little bluish at standard settings, not as good as high-end IPS screens but more than many gaming monitors use old VA high speed panel.

With a few slight tweaks, the color quality becomes better, more neutral, now, the advantages of screen brightness up to 400cd / m2 and the ability to display high dynamic range HDR colors is expressed extremely nicely, accurately reproducing the dark colors – extremely clear light, creating a deep impression on each frame on games that support this feature like Battlefield V and Final Fantasy XV.

Since BenQ EW3270U 4K HDR gaming monitor model, I has the opportunity to experience a gaming monitor capable of displaying HDR content so well with very high contrast in the same frame, bringing the brand new experiences for old games.

In addition, a variety of other gaming-specific features on ASUS TUF GAMING VG32VQ such as up to 144Hz image scan speed, 1ms response rate or AMD FreeSync / G-Sync Compatible feature also provides display capabilities. smoother in each frame, minimizing the phenomenon of ghosting, stuttering or tearing that annoys with conventional screens.

In addition to the display features, ASUS TUF GAMING VG32VQ can be viewed as a “pure” gaming monitor without other extra features such as recent high-end gaming monitors, such as ANC noise reduction feature on AORUS FI27Q screen that Biareview has introduced.

Overall, the display quality of ASUS TUF GAMING VG32VQ is good, creating a quality highlight for the product and bringing a different experience to the players, especially the ability to display HDR images, bringing Impressive frames come to gamers at the right price.

When displaying images in a black background, the screen shows bright and bright exposures. Although it is known that this is the “common disease” of the curved screen today, but with the high backlight for HDR display, this problem becomes much more serious, making the colors in the the area around the edge of the screen becomes uneven in other areas.

However, these two issues can be considered quite small and users can fully accept to “trade” for a good visibility, flexible design with an attractive price in the segment high-end gaming monitor.

where can you get a ASUS TUF GAMING VG32VQ online