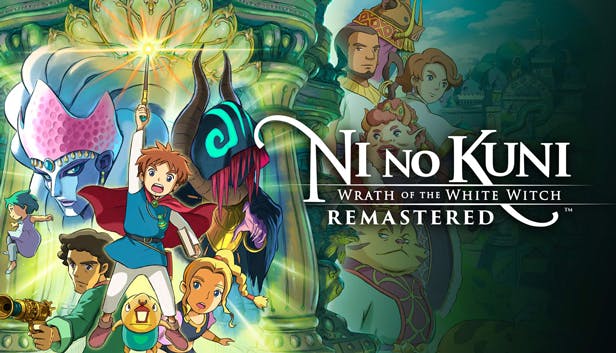 Not trying to hide or deceive the player, the story of Ni no Kuni: Wrath of the White Witch Remastered is very open. Players easily know what they are doing, what to do.

The beginning of the game is quite light, the player will play the role of Oliver and his mother living in a small city called Motorville. At this stage, you mainly go around buying snacks for your mother, meeting neighbors to chat, listen to stories about Philip’s homemade car.

After spending a lot of time that I thought was “playing the wrong type of game”, our story began to change 180 degrees when Oliver’s mother sacrificed to save her child.

Oliver in grief over the loss of his beloved mother, inadvertently removed the seal for Drippy, a forerunner from another world but imprisoned in disguise … a stuffed animal!

Drippy convinced Oliver that his world and him are two worlds connected through a magical corridor, which also means that each of Oliver’s world will have a copy of himself (called Soulmate) in Drippy’s world.

Oliver’s mother has Soulmate, the great magician Alicia – who is being held captive by the dark wizard Shadar and if he successfully rescues Alicia his mother will probably return to the world.

Oliver’s great adventure begins here. Into the new world, the game will give you a Wizard’s Companion with everything described in great detail from the use of each type of magic, which monsters will be weak magic resistance …

However, this is not to say that the game “guidle” everything, instructions are set but the implementation is you.

The mechanics in the game are very manual and sophisticated, for example, standing in front of a locked chest – you have to unleash a spell to unlock, encounter a mushroom – you enchant the time the tree will grow, missions will show you where you need to go, but you have to find your way to the destination …

With everything being done in such a detailed and dense manner, almost half of the game time is around guiding players to learn how to use the game’s features properly.

Combined with the sluggish pace of the gameplay, each of the first chapters in Ni no Kuni: Wrath of the White Witch Remastered is humble with full introduction, happenings, results and integration into the side quests with value rewards that you can run around all day (besides the available rewards, after completing the side quests you will receive stamps, when enough stamps are collected you will redeem for skills especially as high jump, run fast, detect items …).

Gentle, adventure is like that, but after experiencing the first half of the game, the second half of the story began to progress faster and faster both in the gameplay and the plot.

The simple reason, although taking the turn-based style, Ni no Kuni: Wrath of the White Witch Remastered is not unique to the traditional style but mixed in with the influence of the ADB (Active Time Battle) style – the mechanism created the brand of Final Fantasy XII: The Zodiac Age and the Xenoblade game series.

Because of that hybrid, the options in the game become more improvised and flexible.

The system of companions (Familiar) makes things inherently troublesome now even more confusing. Basically, Familiar are beasts that you “convert” or voluntarily follow you with different powers and skills.

With 3 main characters in the squad, each has up to 3 companions, each companion can control as a player, and that’s just a fighting mechanism and next to dozens of things like the item system, magic system, tactical system …

Although the story in the game goes straight but does not mean that there are no climax.

Going through the story of the game, the player plays like a true incarnation into the little boy Oliver with all levels of emotion and indignation.

From a playful boy into a responsible person with the burden of saving both worlds on his shoulders.

With the Ghibli style creation, you will surely have a poetic return to childhood.

The Cel Shading style is used and maximizes the full power in Ni no Kuni: Wrath of the White Witch Remastered.

In fact, the writer has no choice but to greatly admire the use of the artists’ colors when only by using two original monochromatic color blocks, one bright, one dark, to highlight the sophisticated world and detail.

The vast steppe, the lovely small town of Motorville, the kingdom of Ding Dong Dell is filled with tiny nooks and crannies, Al Mamoon is burning … all lively and like dancing in front of the screen!

Ni no Kuni: Wrath of the White Witch Remastered also impressed by the music from Joe Hisaishi – the witch behind Princess Mononoke, Spirited Away, Howl’s Moving Castle …

The music in the game will make you label a nostalgic but not bored, so classic or philosophical that it is more like the nursery rhymes.

Music, pictures, storytelling make it easy for adults to find themselves as a child yearning for adventure.

Originally a refreshing game, meaning Ni no Kuni: Wrath of the White Witch Remastered didn’t have many important changes in the gameplay or the like from the original game.

The battle continuously unless you flee (if you do not increase the speed do not dream of escaping monsters) or the distance of experience is too large between the two sides.

The scenes in Motorville are still locked, although it is not really important to feel the plot but the feeling is still uncomfortable when your character is hidden among the houses.

Tactic function is quite stupid, if not in your hands to control, the characters automatically only have to rush into the enemy to … commit suicide whether it is a defensive or attacking option.

Ni no Kuni: Wrath of the White Witch Remastered is so great in every way, everything in the game is harmonious, enhancing each other’s beauty to the best.

If you’re looking for a nostalgic game but don’t know where to start or simply want to enjoy an adventure story, fairy but also full of romance, Ni no Kuni: Wrath of the White Witch Remastered is definitely is a name that is not in vain for your choice.

Ni no Kuni: Wrath of the White Witch Remastered – PlayStation 4: Buy it now

Ni No Kuni: Wrath Of The White Witch: Remastered (PS4): Buy it now