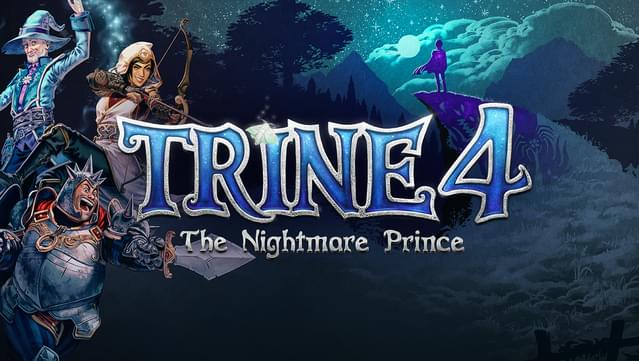 Many aspects of the series that many people feel familiar with have been removed. Not only does the character’s skill set drop significantly, but the game doesn’t have a skill tree, which makes everything no different from the beginning to the end of the game.

The game also requires you to collect a certain amount of “trineangle” in order to get through the screen. Therefore, you may have to play certain levels over and over to earn enough trineangle.

These trineangles should have been an auxiliary element to encourage players to explore, but the manufacturer forced you to hunt them down as a “duty”.

Moreover, the 3D environment is new but it brings a dozen problems: the rear location is covered by objects in front, the character control is unnatural, it is difficult to calculate the distance …

There are also a number of minus points, which together, they are why Trine 3: The Artifacts of Power is considered a failure of the series.

And that is also why you are here!

Trine 4: The Nightmare Prince has a noble mission. It must prove to the player that the developer still has the ability to create an experience Trine game.

Returning to the traditional 2.5D space, Trine 4: The Nightmare Prince is a proof that Trine was born for this graphic genre. And like previous 2.5D products, the graphics of the game really “fascinated”.

In every minute of experiencing the game, it will not be difficult for you to notice that the background space is adorned with a very vivid and godly, to the point that each frame seems to be attractive enough to be a background image.

Not only that, through each game stage, you will come to a different world, with different scenes, and it all goes into people’s hearts. The game will lead you through a magnificent dream castle, the forests with thousands of trees, or the “hell on earth” with darkness …

Another Trine feature is puzzles, and Trine 4: The Nightmare Prince has made solving puzzles fun.

In each game screen, there will be a series of puzzles waiting for you. You have to decode them to move on, and this requires a clever combination of the abilities of the three characters Zoya, Amadeus and Pontius.

Zoya excels with the ability to connect ropes between objects and shoot fire arrows and ice. Amadeus can create objects for you to stomp and go further afield. Pontius can use his shield to adjust the direction of the light source or water source.

Of course each character has other capabilities too, but the important point is that combining these abilities at times will present your own puzzle solutions that the manufacturer did not expect.

The game allows you to move characters continuously and “lightning fast”, so with many puzzles, you just need to hurry and standard time to switch characters and use their ability that you have passed the challenge test.

This makes the playing experience uncompromising and interesting, unexpected, because you will sometimes feel “intelligent” than the developer.

Frozenbyte also probably found that Trine 3: The Artifacts of Power was a failure, so it tried to compensate the player in many ways.

A highlight as mentioned is that the game returns with 2.5D space and the graphics are captivating. Besides, the skill tree has also returned, and your character will gradually grow stronger, unlocking skills gradually along the game.

With approximately 45 minutes per game stage, the game gives you about 12-14 hours of experience.

In addition, if you are an achievement hunter, the game has challenges such as gaining experience, treasures or Knicknacks in the game.

An interesting point is that the end of Trine 3 is quite “truncated”, implying that the manufacturer at that time expected to create a successor.

But the story of this game has nothing to do with the previous product. So maybe Frozenbyte wants to “pretend” that Trine 3 never existed?

Anyway, Trine 4: The Nightmare Prince is the most valuable product in the Trine series, if you have experienced the previous games, there is no reason to skip this game.

To be fair, combat experience has never been Trine’s strong point, but it’s no fun that Trine 4: The Nightmare Prince continues to maintain this “tradition”.

Each stage will have its own area (often indicated by purple smoke) that when you enter, you will not be able to go out until you defeat all enemies, which are crystallized from nightmares of the prince.

The number of enemies in the game is quite poor, they will appear again and again throughout the game. This makes the fighting experience quite discrete, boring, does not fit in with the game at all.

Perhaps in battle, using Zoya and ice arrows is the simplest option, because this ability will “freeze” the enemy.

Pontius is a close-range engineer, requiring you to approach your opponent and increase the danger of being hit. Amadeus is probably the worst fighting option, because he doesn’t have a direct attack designed to damage enemies, but almost rely on the objects he creates.

Of course you can also try some other fighting styles if you want, but generally the in-game battles are not worth your attention.

Always convenient, besides normal battles, the game also brings boss battles. There, the character must confront his own fear.

In general, although these battles are somewhat more special than fighting normal monsters, they still cannot afford to “lift” a boring battle system.

Finally, as you can see, most of the villains in this game have something to do with dreams or memories, that’s a story-related element.

The plot of the game is just like a “something” catalyst connecting the chapters. Manufacturers can invest in it, but to be fair, this is not a reason for you to experience this game.

Trine 4: The Nightmare Prince is Frozenbyte’s redemption to game lovers. It finds the basic elements that make up the name of the game series and amplifies them to form a massive product.

where can you get a Trine 4 The Nightmare Prince online