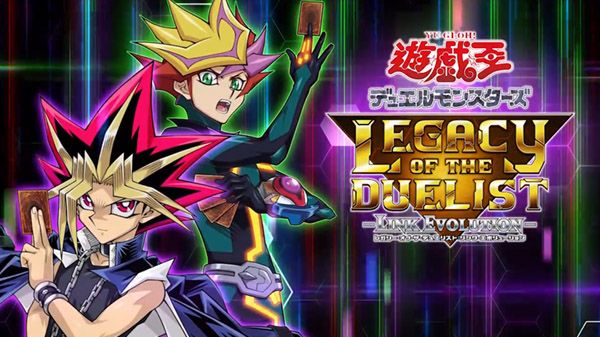 If before, every era of Yu-Gi-Oh! only associated with one game (5D’s on Nintendo DS, ZEXAL on Nintendo 3DS …), making it completely impossible to experience new types of cards in a game – then with Yu-Gi-Oh! Legacy of the Duelist: Link Evolution is different.

The game gives players an extremely bulky plot, by “simulating” the plot in the full manga / anime from time to time: Yu-Gi-Oh! original, GX, 5D, ZEXAL, Arc-V and V-VRAL.

In each major chapter, players will re-experience their favorite moments while tracking each progression through the confrontation of familiar characters like Yugi Muto, Kaiba Seto, Joey Wheeler, Pegasus Maximillion … And Of course, alternating between the plot developments are intense card battles according to the latest rules of the TCG law.

One of the biggest obstacles preventing newcomers to the “cards” of Yu-Gi-Oh !, is that the number of cards in the game has become terribly high (more than 9000 throughout 20 years of development the game), in which it is divided into countless different types of cards such as Effect, Spell, Trap, Fusion, Ritual, Synchro, Xyz , Pendulum …

Yu-Gi-Oh! Legacy of the Duelist: Link Evolution has overcome this disadvantage by cleverly incorporating “beginner” tutorials into the first stages in each chapter, explaining in detail to players about how to play and apply of each type of post of periods.

Therefore, players can fully “role-playing” as Yami Yugi with the legendary Dark Magician or Kaiba Seto with the Blue-Eyes White Dragon.

More specifically, every time you win a card game, players will have the option to replay that match in the role of … opponent. Nothing is more interesting than after a tough victory in the face of a deck that is too formidable.

And of course, the fun of TCG in general and Yu-Gi-Oh! in particular, it is the opening of the “Booster Pack” to enrich the deck, look for “good” cards, and build yourself the most suitable decks.

With the paper format, if you want to play real cards and call it “acceptance”, surely the player will not spend less than several hundred dollar for this elegant and expensive hobby.

But with Yu-Gi-Oh! Legacy of the Duelist: Link Evolution on the Switch, each Booster Pack has only 400 DP – a pretty “Cheap” number when each win is awarded over 1000 DP.

Previously, by launching new forms of cards such as Synchro and Xyz, KONAMI made the arena of “players” from amateur to professional, when they had to adapt to the new rules too complicated and evolving too fast.

And when the Pendulum form came along, it broke the format of matches by way of breaking rules that were too “weird,” and created extra gaps in the table that were too standard and familiar with the Yu-Gi-Oh community! for many years.

Indeed, over the course of several years, the casual appearance of Synchro, Xyz, and Pendulum has made traditional tactics a complete loser, and the inevitable rule is that the old card types such as Normal monsters or Basic summoning effects are almost no longer survive.

Aware of this declining reality, KONAMI finally made an extremely wise decision and quickly made the “defensive” world Yu-Gi-Oh! satisfied: revising the TCG code with new rules, such as the first person not to draw cards in the first turn; set up Extra Monster Zone to limit the spread of monsters called from Extra Deck such as Fusion, Synchro, Xyz; Or completely remove the Pendulum Zone 2 and “plan” them to 2 Spell / Trap Zone boxes in the classic area …

These structural changes quickly have a positive impact on a global community – and if in the previous video games of Yu-Gi-Oh !, players would never have to experience them fully, then with Yu-Gi-Oh! Legacy of the Duelist: Link Evolution, everything becomes possible.

Yu-Gi-Oh! Legacy of the Duelist: Link Evolution has had relatively close updates to the real version, when fully applying the new rules, as well as the new monster format application (Link).

Strictly speaking, the number of cards in Yu-Gi-Oh! Legacy of the Duelist: Link Evolution has an update equivalent to the time around January 2019, and with the feature that supports the good multiplayer feature, we have the right to believe that the game will continue to be updated. New releases follow the actual schedule of KONAMI in the near future.

In addition to the attractive features above, the game itself also has many new tweaks based on inadequacies from previous game versions.

For example, searching for related cards to put into a deck is always a “headache” problem, when the number of cards in the game is so great that the use of each card is equally – making Each time creating a new deck every time the player must “dizzy”.

With Yu-Gi-Oh! Legacy of the Duelist: Link Evolution is a lot easier, when the game integrates the suggestion feature of related cards into an intuitive list – players just choose and count quantity is done.

Yu-Gi-Oh! Legacy of the Duelist: Link Evolution can be considered the best, most complete version of the Yu-Gi-Oh !.

With many valuable updates in terms of content and playing experience, this is a “must-have” game in the collection list of anyone who loves this “expensive” series of games.

More specifically, with innovations aimed at attracting new players to Yu-Gi-Oh !, even “beginners” or “infidels” can approach Yu- Gi-Oh! Legacy of the Duelist: Link Evolution with ease.

where can you get a Yu-Gi-Oh! Legacy of the Duelist Link Evolution online