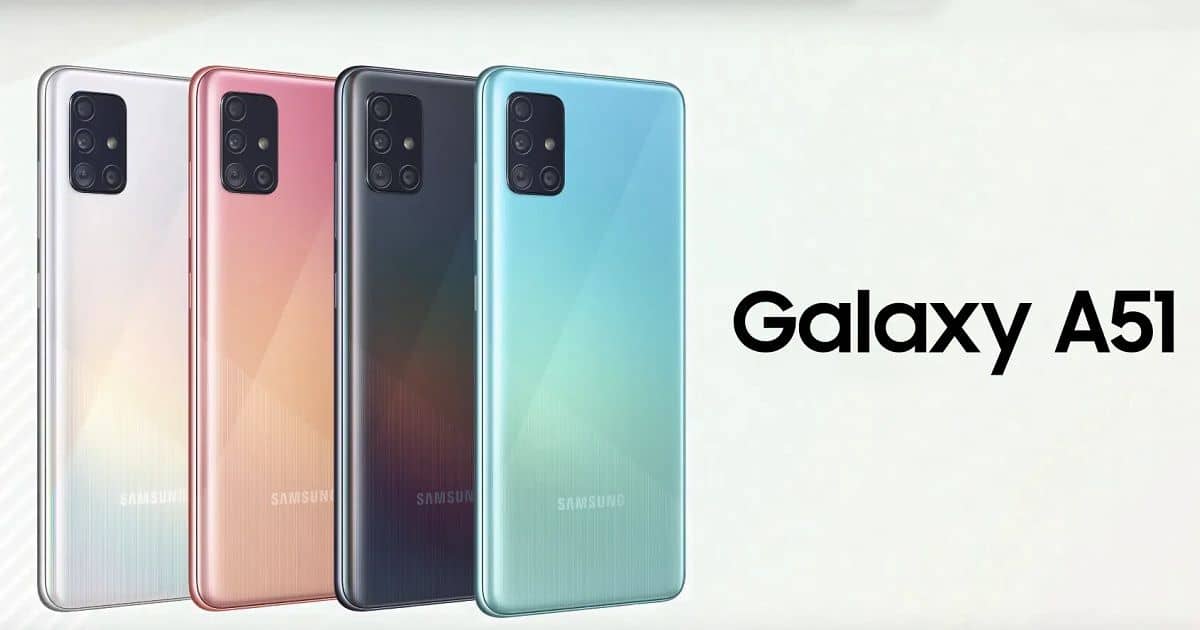 The Galaxy A51 opens up an exciting future for mid-range smartphones, at least for Samsung’s Galaxy A series. With the A51, users have the right to believe that they will not need to spend “much” money to own a smartphone with high-end design, and that trend will be covered by Samsung more widely in 2020 to.

Since 2019, Samsung has changed its strategy with the Galaxy A series, bringing new points to the mid-range segment first and then the high-end line. If this Korean brand continues to follow that path, we can expect that Infinity-O screens will become more popular in 2020.

Infinity-O screens section contains a 32MP selfie camera, f / 2.2 aperture, supports HDR shooting, right above is the speakerphone strip. Galaxy A51 does not use sound transmission technology to the user by vibrating mechanism Sound on Display like Samsung Galaxy A80. However, all three edges are still thin, spacious experience.

The bottom edge, or the “chin” part of the Galaxy A51 has been trimmed very thin, on par with the Galaxy A80 in the high-end segment and only slightly inferior to the Note 10 and Note 10+. This is a remarkable achievement for a phone in the mid-range segment like this, when not only those who own high-end phones are entitled to dream of a “completely borderless” smartphone.

Like its two older brothers, the Galaxy A51 continues to stick with an optical fingerprint sensor under the display. In general, the speed and accuracy of this fingerprint sensor is not much different from the Galaxy A50s we evaluated, it still has a delay due to waiting for the light to scan the entire fingerprint and Samsung recommends Users consider when using screen protector to ensure the sensor works properly.

On the back of the device, it is impossible not to mention the “L” camera cluster of the Galaxy A51. The cluster includes a 48MP main camera, f / 2.0 aperture, Sony IMX586 sensor, 12MP ultra wide-angle camera, f / 2.2 aperture, 5MP depth-of-field camera, and especially a 5MP dedicated macro camera. Not excluding the possibility that the Samsung Galaxy S11 launched early next year will also have a camera design like this, even more lenses. Despite being slightly convex, but you only need to use the case that comes with the device, so you do not need to worry about channel or camera clusters.

The back of the Galaxy A51 still uses the glossy Glasstic 3D imitation plastic, along with fancy block pattern motifs and color-shifting effects like the Galaxy A50s. The corners are smooth for a comfortable grip, the black version has a slight fingerprint grip but no problem.

The body is still made of plastic, but due to the space for the macro camera, so despite the configuration and similar size, the Galaxy A51 is 0.2mm thicker and about 3g heavier than the Galaxy A50s, respectively 7 , 9mm and 172g. However, the difference is very small, and it is difficult to feel the difference in the grip. The physical position of the buttons remains the same, so if you’ve ever held the Galaxy A50s and Galaxy A51 for the same experience.

The number and location of connectors on the Galaxy A51 has not changed, the device still holds the 3.5mm headphone jack (inside the box with the included headset), USB Type-C port and single speaker strip.

Galaxy A51 equipped with 6.5 inch Super AMOLED screen with Full HD + resolution (1080 x 2400 pixels), the 20: 9 aspect ratio should be a bit slimmer than the 19.5: 9 of the Galaxy A50s. By default, the screen will display in Natural mode, reproducing colors close to the standard colors, but you can switch to the Vivid mode with a richer color gamut, more true to the Super AMOLED panel.

With a thin border, the experience of using Galaxy A51 is very good. As usual, Super AMOLED panels still have the advantages of deep black, wide viewing angle, high contrast and good brightness, easy to use outdoors. But obviously, there is still a difference in color saturation, clarity between panels on a mid-range machine like the Galaxy A51 and Note, S higher-end devices.

If Galaxy A51 has made significant changes in design, the configuration of the device will still “stand still” with the Exynos 9611 chip. Partially offset, the Galaxy A51 version in Vietnam has 6GB of RAM and 128GB internal memory. Of course, it’s impossible to expect Samsung to immediately launch a new chip in just a few months, especially when the Exynos 9611 chip itself was a minor upgrade of the Exynos 9610 on the Galaxy A50. However, the mid-range segment is having a lot more powerful processor choices from both Qualcomm and Mediatek.

Because the two familiar benchmark tools, AnTuTu Benchmark and GeekBench, have had a new version and changed the scoring method (specifically, a higher score than the previous versions), AnTuTu does not allow installing the old version so it is temporary. BiaReview has not been able to update its database yet. During actual use, I found that the performance of the Galaxy A51 is similar to the A50s, on par with the Snapdragon 660 and quite a lot less than the newer mid-range chips such as Snapdragon 712 or Helio G90T.

When testing with the game, it was quite surprising when PUBG Mobile set itself up for the Galaxy A51 at a high graphics level and was unlocked to 40 fps. However, when playing in real life, measured by the GameBench tool, the computer seldom achieved that fps, but only an average of 29-30 fps, 84% stability. Overall, it’s hard to say that performance is the strength of the Galaxy A51 compared to rivals in the price range.

The latest Android 10 software, One UI 2.0 with many improvements

Samsung especially favored the Galaxy A51 when it came with Android 10 pre-installed, the latest One UI 2.0 interface right from the factory. This new operating system has a lot of changes, small improvements, hard to list all, instead I will focus on the most valuable feature is the full screen gesture navigation.

Speaking of gesture navigation, previous versions of One UI have allowed users to activate this feature, but Samsung’s approach is quite “half-hearted” when users still have to swipe from the bottom edge of the screen to the right position virtual buttons. With One UI 2.0, Galaxy A51 fully integrates Google’s full-screen gesture navigation, and users will swipe the side to perform Back, swipe the bottom and hold to go back to Home, opening multitasking exactly like Bphone 3 or iOS. The swipe experience is very smooth, and obviously Samsung needs to bring this feature to other Galaxy devices as soon as possible.

In addition, you can also adjust the sensitivity of swipe gestures. This is especially useful if you use thick cladding that makes it difficult to swipe the edge. Using the case that came with the device, I left the default sensitivity level without a problem.

The strengths of One UI, such as system-wide dark mode, shortcuts, icons optimized for one-handed use, etc are retained. However, one thing I do not like is that the device still has many applications such as Zing MP3, Zalo and New Newspaper installed.

Battery time does not change, as expected

Still equipped with the same configuration as the previous generation with a 4,000 mAh battery unchanged, equivalent screen size, not difficult to understand when the Galaxy A51 has the same battery life as the Galaxy A50s – enough to use a comfortable day with high amtitude. I expect Android 10 and One UI 2.0 to somehow optimize battery life, but it seems that the previous versions have also optimized well.

Comes with the device is still 15W Adaptive Fast Charge from Samsung. With this charger, the 4,000 mAh battery of the Galaxy A51 will be fully charged in 2 hours, slightly longer than the current average of 1.5 hours. Perhaps, Samsung should increase the fast charge to 25W similar to the A70 or A80.

where can you get a SAMSUNG GALAXY A51 online

Compared to the Galaxy A50s, the camera of the Galaxy A51 has been significantly upgraded, at least in terms of specifications. Besides the dedicated macro camera, Galaxy A51 also has improvements such as the main camera sensor is IMX586 instead of IMX582, the difference between these two sensors is that IMX586 supports 4K 60FPS video recording (but because one The Galaxy A51 still only allows 30FPS recording) and the wide-angle camera resolution is raised to 12MP.

The photography interface of the Galaxy A51 has also been slightly changed compared to previous versions, with the “extra” shooting modes such as panorama, close-up, Night Mode, Slow Motion, … placed separately in a menu, next to the three main menus are photography, video and dynamic focus (font removal). This arrangement seems to be more scientific, I don’t need to swipe the screen all the time just to switch between modes.

Preliminaryly, the Galaxy A51’s camera, like the two previous seniors, has met most of the common shooting situations today with fresh, clear, detailed images that can be shared immediately to social media without any further modifications. In low light conditions, Galaxy A51 still has good shutter speed, less blurry images but much noise if there is too little light, Night Mode mode will help improve significantly. Photos removed fonts, both front and back cameras of the Galaxy A51 are very shimmering, though the face tends to be slightly softened even without turning on the beauty mode. Those are the characteristics that the Galaxy A51 inherits from its seniors.

Here are some photos taken from Galaxy A51 cameras, but readers need to know that during the experience, the weather in Hanoi was not really favorable, the sky was cloudy, foggy, so even the Outdoor photos don’t look really bright, although the HDR feature has significantly fixed the problem.

Macro cameras bring very interesting new insights into our world, when the “ants”, “bees” or simply dew drops remaining on the petals and branches of the leaves are clearly visible. What could only have been captured with cameras with dedicated lenses is now possible with a phone that fits in a pocket. Of course, the quality is still far away, but these are also the first bricks, opening a new direction for mobile photography.

The macro camera of the Galaxy A51 works well, eye-catching, the focus area is quite wide, pretty detailed, but only works best when the lighting conditions are favorable and the static subject. If the light is a bit low, the image will appear much noise. An important note is that the camera does not have autofocus. You will have to manually align the area by moving the device back and forth. The camera also does not support zoom, so focusing on small details like the pistil, veins, will require you to be very patient and observant.

At first, I was skeptical about the Galaxy A51 when Samsung released three variants of a model in just a short year. But then I realized that the device was essentially a product that opened a new year, a new decade, and hopefully a new era for Samsung. Gradually blurring the line between high-end and mid-range phones, Samsung is showing itself a long-term strategy with the Galaxy A series, not just exploding in 2019. It deserves to be selected and promises to be a hot name in the beginning of 2020, especially when you are particularly interested in design, camera, screen.