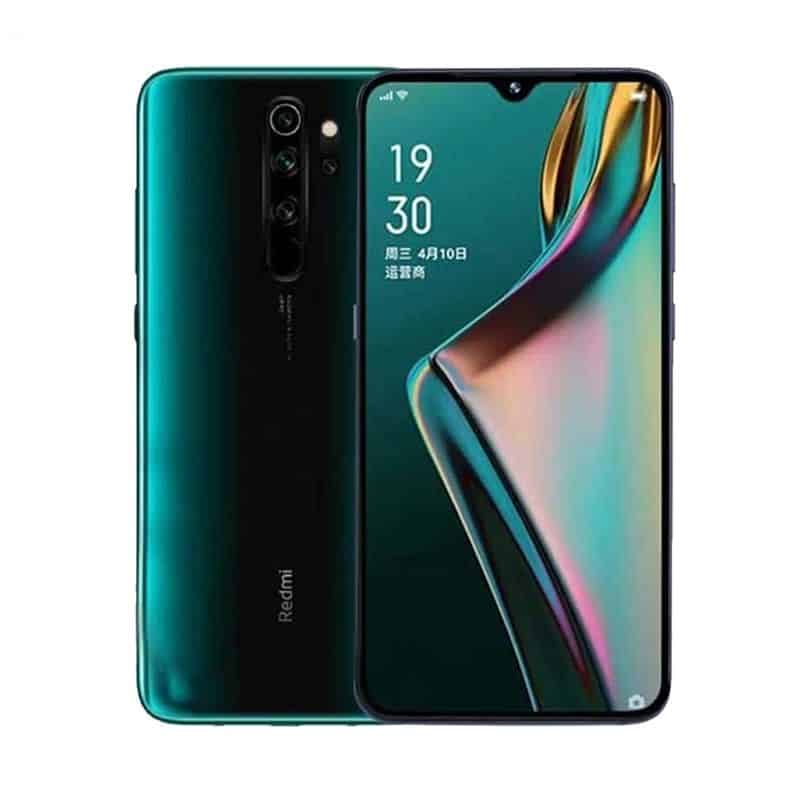 If you are a Xiaomi fan, you can see that the design of the Redmi Note 8 Pro has many similarities to the recent Mi 9T. It still uses the glass back and plastic frame similar to the Redmi Note 7 but is treated to look more eye-catching and more classy than its predecessor.

The back of the phone is curved, fits perfectly and holds your hand. But the Redmi Note 8 Pro also feels a bit bulky and heavy in hand. At 8.8mm thick and weighing 200g, this phone is much thicker and heavier than the Redmi Note 7 Pro (8.1mm, weighing 186g). Bigger screens, bigger batteries, and more rear camera clusters are the reasons for thicker and heavier products. However, that is probably not the problem at all.

On the front, the Redmi Note 8 Pro has a selfie screen, not a full screen with a front-facing camera that looks like the Mi 9T in the higher price segment. The screen border of the device is quite thin, the display / front ratio is 85%, slightly better than competing product Realme 5 Pro (84%).

Overall, it can be said that the Redmi Note 8 Pro is currently the most beautiful product in the Redmi Note series so far. However, the product also has a few small minus points like a smooth grip, a fingerprint sensor located in a slightly high position, especially for users with small hands and a slightly protruding rear camera assembly.

Screen: good quality, see clearly in the sun, including HDR

Redmi Note 8 Pro uses an IPS LCD screen with water droplets on it. The screen is sized at 6.53 inches, Full-HD + resolution, 19.5: 9 aspect ratio, Gorilla Glass 5 protection and HDR support, a rare feature at this price range.

The display quality is also very good, natural color, high contrast and wide viewing angle. In particular, this screen supports HDR content, so watching HDR-enabled videos on YouTube is more vivid. Color temperature in the default mode of the screen is a bit blue, but Xiaomi allows users to adjust the color temperature and contrast to suit different needs. In addition, the screen of the Redmi Note 8 Pro also has a dark mode, reducing eye strain when used at night.

Performance: superior in the mid-range segment

In recent years, the Redmi Note series has been based on Qualcomm processors. In this version of Redmi Note 8 Pro, Xiaomi switched to Mediatek chip. The company confidently promotes the Helio G90T chip on the Redmi Note 8 Pro and sees it as a selling edge. Helio G90T has eight processing cores, including 2 high-performance Cortex-A76 cores clocked at 2.05Ghz and 6 power-efficient Cortex-A55 cores clocked at 2Ghz. The Helio G90T graphics chip inside is Mali-G76 3EEMC4 clocked at 800MHz with HyperEngine technology to improve the gaming experience. MediaTek itself promoted this as a gaming chip.

On performance measurement applications, Helio G90T proves the overall power superior to the same-priced smartphones using the Snapdragon 712 (Realme 5 Pro) or Exynos 9610 (Samsung Galaxy A50s). In terms of graphics processing, which has not been a strength on Mediatek chips for a long time, G90T also scores significantly better than Qualcomm’s mid-range chip, Snapdragon 712 and outperforms the competition. The mid-range Exynos 9610 chip is used by Samsung on many A and M series smartphones of 2019.

In practical experience, Helio G90T along with 6GB RAM proves that Xiaomi is not wrong when promoting this chip as a product strength. It responds well to everyday activities on the phone, applications open fast and smooth experience.

With the game, Redmi Note 8 Pro also plays the most graphically heavy games on Android today. Specifically with PUBG Mobile, the phone reached 39 fps with 92% frame stability when playing in the highest graphics mode, according to the GameBench frame measurement application. Helio G90T has slightly better gaming performance than Snapdragon 712 on Realme 5 Pro but still slightly inferior to Snapdragon 730 on Xiaomi Mi 9T.

However, the gaming process, the machine heats up quite quickly and the heat level is perceived to be significantly higher than the Realme 5 Pro in the same playing time. The hottest area is the rear camera cluster. Coolers are quite fast after a period of time to stop playing, but this can be considered a minus point in the product. The hot phenomenon not only causes discomfort during gaming but also causes the product to drain the battery faster. Perhaps understanding this, Xiaomi has increased the battery capacity of the product to 4500 mAh, not 4,000 mAh as other similar price products.

In terms of software, the Redmi Note 8 Pro comes pre-installed with MIUI 10 based on Android 9. This is a very familiar software package for Xiaomi fans with many of the manufacturer’s specific features included as the 2nd space to contains private data; dual applications to run in parallel 2 accounts Facebook, Messenger or Zalo; lock apps that need to be protected with a password, fingerprint …

where can you get a REDMI NOTE 8 PRO online

Battery time: enough peace of mind to use during the day

Redmi Note 8 Pro uses a 4500 mAh battery and Helio G90T chip on the 12nm process is quite energy efficient. In the familiar surfing tests, movies and games of BiaReview, this phone gives a decent usage time, enough to use it during the day with normal demand but still inferior to some 4,000 mAh smartphone using Qualcomm chip. That shows the Helio G90T chip provides impressive performance but is not really optimal when considering the power saving.

Redmi Note 8 Pro has up to 5 cameras including 4 rear cameras and one front camera. We should not be too overwhelmed by the number of cameras because 2MP macro camera does not bring much meaning in practice. However, compared to the Redmi Note 7 Pro with only two rear cameras, it is clear that the camera on the Redmi Note 8 Pro is also an upgrade, the most notable of which is the addition of ultra-wide angle camera capable of autofocusing dynamic. Super wide-angle cameras on many smartphones of the same price range currently support only fixed focus, not capable of adjusting focus like Redmi Note 8 Pro.

In terms of image quality, the 64MP main camera has lots of detail, high contrast, and natural-looking colors. In high-light conditions, the HDR mode works effectively to balance between bright and dark areas in the image. However, sometimes photos have phenomena that are handled a bit hard.

By default, the 64MP camera will take photos at 16MP resolution through a 4-pixel algorithm that combines them into one, but you can choose to shoot at 64MP. However, the difference between the two image sizes is negligible, similar to the 48MP camera on the previous Redmi Note 7 Pro. Meanwhile, the image size in 64MP mode sometimes up to 15-16 MB compared to 16MP mode usually only 4-7 MB.

The main camera also supports 2X digital zoom. This is a cropped image from a 64MP camera, it is unclear whether it is a crop from the original 64MP image or a 16MP mode image. Looking at the 2X zoom images below you can see that the image processing in this mode is no different from the normal image from color to contrast and detail.

In font deletion mode, the Redmi Note 8 Pro uses a 2MP camera to capture depth support for the main 64MP camera. The photos show that the camera recognizes the subject border to remove the background quite well, less blurry and the background can adjust the level of deletion after shooting. In addition to adjusting the level of font deletion after shooting, Xiaomi also introduces interesting effects for the photo-removing fonts similar to the lighting effects on the iPhone.

Low-light photos from the 64MP camera of Redmi Note 8 Pro are similar to rivals using Sony’s 48MP camera like Realme 5 Pro or Galaxy A50s. The image is a bit grainy but the colors are nice and the noise control is quite good. It also supports 64MP shooting in low light but the image is no different than the default 16MP. In general, you should shoot in the default mode of 16MP both bright and underexposed, photos are light and the quality is not different.

Night Mode of Redmi Note 8 Pro helps to improve the overall image quality, sharper photos, more detailed especially dark areas. But everything is improved to the right, not being as outrageous as “turning night into day” like some other phones. Therefore, photos in night mode are sharper but still look natural.

The ultra wide-angle camera offers interesting shooting angles. In particular, this camera supports focus so you can use it to take close-ups. The treatment of colors is similar to the main camera but with less detail and narrower light bands. In bright enough conditions, photos from ultra-wide angle camera for quality to be used for sharing on the network but lack of light, the image is clearly visible.

The 2MP macro camera takes pictures at very close distances, only about 2-3cm. This is the shooting distance perhaps in terms of practical usefulness is not much. However, in bright enough conditions, this camera is quite clear image.

The 20MP front camera gives photos with good detail. HDR mode works well in images with complex lighting scenes such as differences and backlight. The font deletion mode also identifies and separates the subject relatively smoothly. However, this camera only produces good photos in bright enough conditions (outdoors or indoors with light). If there is no light, the photo is noticeably noisy and blurry.

The choice of Helio G90T processor is a change that helps the Redmi Note 8 Pro stand out in terms of performance compared to other devices of the same price range. Besides performance, the remaining elements of the product are also quite full. Although the number of 4 cameras on the back is only meaningful in terms of number, with the main marketing goal, in return, the 64MP main camera and wide-angle camera that supports autofocus are very positive points. Besides, this phone also has a large screen high brightness, relatively battery life and eye-catching design.

In the international market, Realme XT is the formidable opponent of Redmi Note 8 Pro with the advantage of AMOLED screen, in-screen fingerprint sensor and similar performance power.