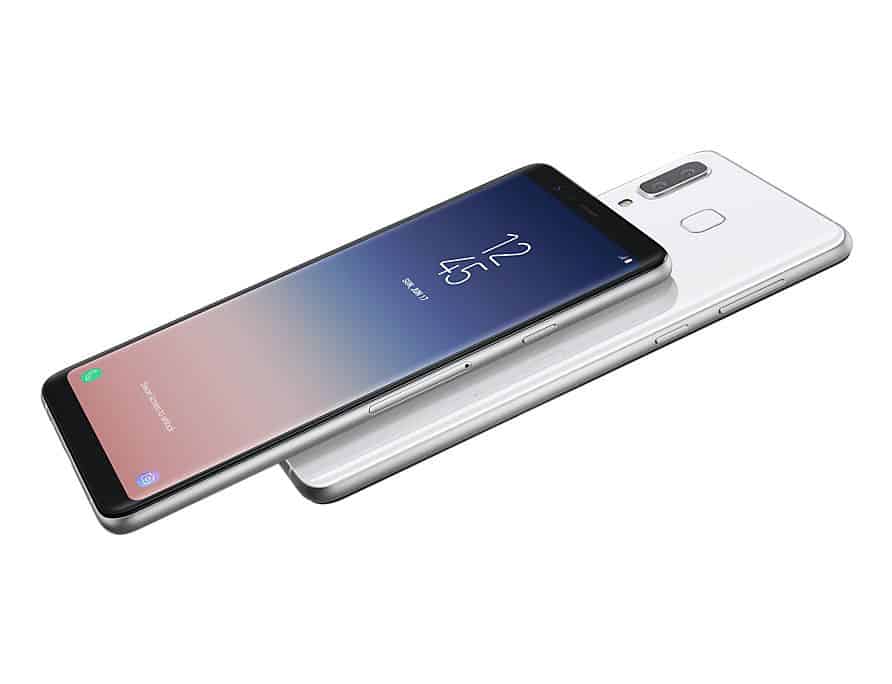 With a screen size equivalent to Samsung Galaxy Note 8 (along with 6.3 inches), the A8 Star inherits the same long body features that are slightly oversized. Samsung also set the power button, volume down and the fingerprint sensor is quite high and difficult to reach with the who has not long finger.

It has a slim design (7.6mm) but still feels solid thanks to the sturdy metal frame. Feeling comfortable also, not to be pressed on the palm when using or have a ripple when clipping on the edges. Samsung finishes the product very carefully. Although the chassis and back cover have different materials (metal and glass) but are very close together, there are no annoying creases.

On the edges, the Galaxy A8 Star is equipped with all the familiar ports and keys such as: 3.5mm audio jack, USB Type C port, SIM card slot (supports 2 SIMs, including a shared tray with card ), speakerphone and Bixby hard key on the left.

The 6.3 inch screen size of the Galaxy A8 Star is the largest in today’s A line. Full-HD + screen resolution (1080 x 2220 pixels) for pixel density of 392 PPI, enough for all types of content displayed in detail.

The A, S and Note machines all use Super AMOLED panels. Like the recent A-Series, the A8 Star’s screen has a good outdoor look. When used outdoors, the automatic mode automatically increases the maximum brightness to a much higher level than the maximum brightness in manual mode. High brightness combined with extreme contrast and deep black are factors that help the Super AMOLED screen on Samsung phones can be used outdoors comfortably.

The machine has a variety of color modes that can be adjusted in the settings of the screen. In the default mode (optimum display), the unique features of the Super AMOLED panels are reproduced most clearly: bright colors and deep black. If you want to display color with high accuracy, Samsung also offers Basic mode. As measured by BiaReview, in Basic mode, the colors are reproduced very well.

Of course, not all Super AMOLED panels are the same. Compared to Samsung’s new Galaxy S or Note line, the A8 Star’s screen is less accurate in terms of detail, vibrancy and clarity. But the screen is no less competitive than the high-end machines.

Unlike previous years, which used to be the home-grown Exynos chips, this year Samsung is aggressively turning to the Snapdragon CPU for its midrange and mid-range products. With the A8 Star, the machine is equipped with a Snapdragon 660 processor with 4GB of RAM and 64GB of internal memory (up to 512GB of memory card slot).

Significant difference lies in the graphics processor: Snapdragon 660 uses 512 Adreno GPUs, and 835 is Adreno 540. The performance gap between the two chips is quite large, but is only evident in games with and you’ll also need a recognizable FPS.

With familiar benchmark applications such as AnTuTu, Geekbench, GFXBench, Galaxy A8 Star scoring the same as another smartphone, Snapdragon 660 is the same as the Nokia 7 Plus and slightly lower than the Exynos 8890 on the Samsung Galaxy Note FE.

In practical use, the A8 Star is well suited for most tasks, with smoother feedback, fast app launches, and multitasking. With heavyweight titles like Dead Trigger 2, Warhammer 40,000: Freeblade, Mobile Alliance, and high frame rates, good stability. Only with PUBG Mobile’s A8 Star is not good, average frame and stability are pretty low.

Like the recent A-series, the Galaxy A8 Star is currently available with Samsung’s latest Samsung Experience 9.0, which is based on the Android 8 Oreo platform. The new A8 Star comes with a virtual assistant. Bixby offers a number of utilities, such as synthesizing information, prompting and suggesting useful apps. Unfortunately, voice commands are only available in English, Korean.

Another drawback is that the A8 Star does not support Samsung Pay so you can pay conveniently with your phone, without having to carry multiple cards or cash with you.

where can you get a SAMSUNG GALAXY A8 STAR online

Samsung Galaxy A8 Star SM-G885F/DS 64GB/4GB Factory Unlocked GSM Only, No CDMA – International Version (No warranty in the USA) (White): Buy it now

Samsung’s mid-range and high-end phones in the coming years are always impressed with the battery and the A8 Star. With a 3700 mAh battery, in practical use, the A8 Star can be used comfortably throughout the day with high intensity from early morning to late night, with screen brightness of 8 to 9 hours. BiaReview’s standard battery tests also show the good battery life of the A8 Star. If used with basic intensity, less game play, the machine can completely stand for 2 to 3 days to recharge.

The A8 Star is equipped with a high resolution 24MP + 16MP rear camera, both with large f / 1.7 openings, phase focus and 4K video recording capabilities. The front camera also has 24MP resolution and f / 2.0 aperture. Live Focus supports both front and rear cameras with bokeh effects favored by the manufacturer called Art Bokeh.

Overall, the Galaxy A8 Star’s camera gives good quality in most familiar situations. The machine has the advantage of sharpness, detail, bright colors in bright enough conditions, brightness. Photos in these conditions can be used at all times without any further modification, in line with the needs of the fast-paced social network of most users.

The lack of light, the A8 Star still retain the image quality, the advantage of the large picture is very clear, fresh color but the user will have to accept the sharpness, detail reduced significantly. Fonts and Art Bokeh are great additions to create stunning portraits. The selfie front camera gives good sharpness but the color, especially the human skin color, still needs improvement.

With the display, Galaxy A8 Star can meet almost every criteria needed in a smartphone attractive. From eye-catching design, fine finish, high-quality screen, good outdoor view, fast camera, sharpness, color, fine detail, many cool features like clearing the camera front and After that, smooth performance, heavy game, long battery life, all are A8 Star full expression.

1 thought on “SAMSUNG GALAXY A8 STAR”