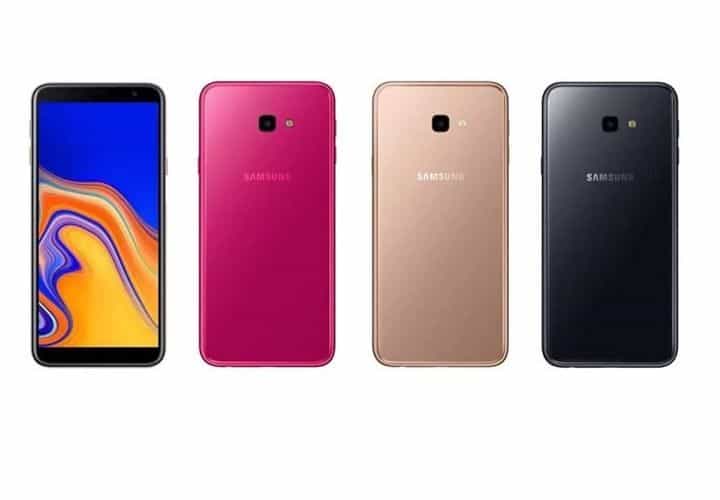 The appearance of the Samsung Galaxy J4 is very similar to Samsung’s mid-range smartphone a few years ago: metal frame, plastic back, rounded corners. This is also a rare smartphone that can be peeled back to replace the battery, access memory card area and SIM.

The front of the machine is quite boring: the hard button is under the screen, two touch buttons on both sides. Unfortunately the machine is not equipped with fingerprint sensor on the hard button, so users can only open the machine with password or picture. Perhaps the most “modern” point on the front is the 2.5D curved glass, which makes the machine looks a bit more glossy.

With a 5.5-inch, 16: 9 screen, it’s not as long, but it’s about the same as the current 5.8-inch screen. Feel good grip, although the back cover but the machine is still without creaking.

The machine is still using the MicroSIM standard, not the smaller NanoSIM. Plus for Samsung is the ability to attach two SIM cards, a MicroSD card at the same time. Of course, this phone still uses MicroUSB and is equipped with a 3.5mm headphone jack.

Overall, the design of the Galaxy J4 is old, not as eye-catching as Samsung’s higher-end smartphones. Looking to smartphones for around $200, most use only basic aluminum, but at least the design has improved with the long body (Xiaomi Redmi Note 5, Asus Zenfone Max Pro M1) or dual cameras and new color (Huawei Y7 Pro).

Galaxy J4 is Samsung’s lowest price smartphone equipped with Super AMOLED technology screen. Of course, the J4’s AMOLED display can not equal Samsung’s high-end line of brightness, width, or contrast, but it still has its strengths. J4’s display can display deep, honest black, easily recognizable when watching movies at night.

Machine is not equipped with light sensor, so it is inconvenient to adjust screen brightness. The brightness of the machine can be used outdoors, but because the anti-glare layer is not very effective so if the sun is directly in, it is difficult to see. Screen contrast is also good.

The drawback of the screen is the HD resolution (1280 x 720) so not enough sharpness, although the size is only 5.5 inches. When I look at the text or images displayed on the web, I can still see the text, the image slightly thorn.

The camera has a lot of shooting modes, but it is limited to a higher camera, such as professional shooting mode that adjusts brightness, white balance and ISO, or sticker mode is just to put the icon into the picture do not catch faces like high lines.

Due to the relatively weak configuration, the performance in the imaging application is also significantly affected, especially the preview frame in shooting modes such as beautiful Portrait. When shooting, the preview image is not smooth. In addition, HDR photography has its own mode and also saves images slowly.

In bright light conditions and brightness, standard definition implies good image clarity and detail. However, the machine has a narrow range of light, also light is slow, so the image is often redundant or lack of light. HDR mode also only improves some of this weakness. At night, the picture does not hold much detail. Due to the narrow band, if there is light, lights … when shooting dark, this detail is often blurred.

The self-contained flashlight on the Galaxy J4 has the ability to adjust the brightness in three levels. In the evening or in the back, the flash helps to compensate for the face, and the yellow light makes the face more rosy. By adjusting the intensity of light, you can control to reduce the flash intensity so that the face is smooth and shiny. Selfie image quality at acceptable level, featuring beauty.

where can you get a SAMSUNG GALAXY J4 online

Galaxy J4 uses the Samsung Exynos 7570 SoC with four 1.4GHz Cortex A53 cores, a Mali-T720 MP2 graphics, 2GB of RAM and 16GB of internal memory. Using a low-profile configuration, the Galaxy J4 still suffers from everyday tasks but at a fairly slow pace.

That said, it does not mean the machine has a bad experience. With the basic use of the Galaxy J4 are met, not jerk like the cheap smartphone a few years ago. With games that do not require too much configuration, the machine plays well. But at around $200, the other phones are powered by the Qualcomm Snapdragon 636 chip, which has a much better performance.

Galaxy J4 is installed interface software Samsung Experience 9.0, only different high-end Samsung in the control operation with touch button and home button outside the screen. Some useful software features are also included, as Dual Messenger supports two Facebook accounts or Personal Folders, which allows you to hide sensitive files with a password.

Samsung’s midrange models have good batteries for years, and J4 is no exception. In the process of using, I easily reached the time of using more than a day with tasks such as surfing, Facebook or playing 2D games gently. Although the battery life of 3000 mAh is not so great, the use of low profile and AMOLED screen makes for a long battery life.

In the standard battery reviews of BiaReview, J4 also achieved good results. It reaches over 15 hours of video playback, over 9 hours of surfing and over 8 hours of gaming. The results of the Galaxy J4 overtook most phones in the same price range, only loss the Asus Zenfone Max Pro M1 with 5000 mAh battery.

If only Samsung phones were cheap in the past few years, the Galaxy J4 has been updated and a little better than previous generations. It has a Super AMOLED display, a self-excited camera for flattering photos, and software features from the higher Galaxy series.

But when Samsung is still “nostalgic” with the old design and configuration, other manufacturers have moved very fast and launched smartphones cheap attractive. At slightly more than Galaxy Note 4, Xiaomi Redmi Note 5 and Asus Zenfone Max Pro M1 are both more powerful configurations, dual cameras with the ability to capture deleted fonts. While the Huawei Y7 Pro or Honor 9 Lite possesses eye-catching design, dual cameras and many attractive shooting modes.

Galaxy J4 is still a reasonable choice for those who like the Samsung brand, looking for a basic smartphone with long battery life.