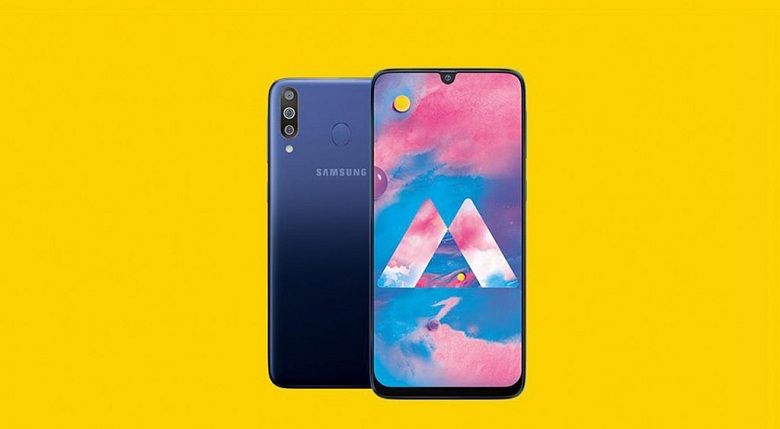 Galaxy M is a device that focuses on large battery capacity and soft price. Therefore, the design of the product looks very simple, universal with a plastic body and does not have new details that follow the trend of the current smartphone market such as the camera or fingerprint sensor in the screen.

However, the plus point of this product is the comfortable grip due to the curved back and the body is not too thick (8.5mm) despite the battery capacity of up to 5,000 mAh. Compared to the elder Samsung Galaxy M20 with similar size and battery capacity, the Galaxy M30 has a 0.3mm thinner body and 12g lighter. This improvement is due to the product switching to using AMOLED panels that are thinner than LCD panels.

Another change to mention in the design of the device is the back has an additional 5MP camera to improve the efficiency of taking photos to remove fonts. The other two cameras on the back of the Galaxy M30 are a 13MP main camera and an ultra-wide 5MP camera similar to the “elder” M20.

Everything else in the design of the Galaxy M30 is similar to the elder M20, is still a U-shaped screen containing the front camera with a thin border on average, a fingerprint sensor on the back, 2 SIM card slot and independent memory card, USB Type C port, 3.5mm audio jack and single speaker below the bottom edge.

In the box, the manufacturer also offers a 15W fast charger (9V / 1.67A), a Type C charging cable, headphones and a plastic case. Overall, the Galaxy M30 is a basic design smartphone, comfortable to hold despite its large battery capacity and full of familiar smartphone features.

The screen is better, but the overall difference is not much

Galaxy M30 is the only product in the M line to switch to using AMOLED panels. The screen panel of this phone has a size of 6.39 inch Full-HD + resolution, 19.5: 9 aspect ratio and a pixel density of 403 PPI is sufficient to ensure details.

In addition to high brightness, this screen also has the bright colors and wide viewing angles typical of AMOLED panels. Compared to the Galaxy M20, the screen of the Galaxy M30 is fresher and has a slightly higher maximum brightness. However, the difference in overall is not much. In fact, the LCD screens on recent mid-range smartphones all have improved display quality, not much different from AMOLED screens like a few years ago.

Performance is the point that the Galaxy M30 retains from the previous generation. Still the Exynos 7904 chip is manufactured on the 14nm FinFET process, has two high-performance Cortex-A73 cores clocked at 1.8GHz and six Cortex-A53 power-saving cores clocked at 1.6GHz with Mali-G71 MP2 GPU. However, the memory (RAM and storage) has been improved with a base model of 4GB RAM and 64GB internal storage, compared to 3GB RAM + 32GB storage on the base version of the Galaxy M20.

In terms of power, the Exynos 7904 chip of the Galaxy M30 is inferior to many products of the same price range currently using the Snapdragon 710 processor (Realme 3 Pro), Kirin 710 (Huawei P30 Lite), Helio P65 (Vivo S1) or Helio P70 (Oppo F11). This is clearly shown in the performance measurement score on the standard benchmark software.

In practical use, the Galaxy M30 gently and smoothly handles basic tasks on the phone such as surfing the web, listening to music, watching YouTube or taking photos. The machine is also good enough to play casual games, but with games that require a lot of graphics processing power like survival games PUBG Mobile or Warhammer 40,000 shooting game: Freeblade, the machine jerks with low fps, hard play.

Overall, the performance of the Galaxy M30 is just enough for normal use, not suitable for gaming. If you want to play games or use heavy applications, you should consider other products equipped with Snapdragon 660, Snapdragon 710 or Helio P65 or P70 chips as mentioned above.

where can you get a SAMSUNG GALAXY M30 online

Unsurprisingly, the large 5,000 mAh battery capacity and the energy-efficient AMOLED screen have brought very good actual battery life to the Galaxy M30. In the familiar tests of BiaReview, this phone has the result of battery life at the top level in the current mid-range segment, much higher than the Asus Zenfone Max Pro M2 with the same capacity of 5,000 mAh.

Galaxy M30 supports 15W fast charging and comes with 9V / 1.67A quick charger. Using the supplied charger, the device fully charges the battery in about 2 hours and 15 minutes, of which the first 30 minutes charge 25% and 1 hour charge nearly half of the battery.

Galaxy M30 has 3 rear cameras and one selfie camera. In the trio of rear cameras, the product inherits the 13MP main camera and 5MP wide-angle camera from the Galaxy M20 elder. New to the camera of this phone is an additional 5MP camera on the back to help improve the efficiency of separation of subjects when taking background fonts and selfie cameras to increase the resolution to 16MP compared to the elder 8MP.

Experience taking photos from the main camera and the rear wide-angle camera of the M30 is similar to the elder M20. In bright enough conditions, the machine has a fast shutter speed. 13MP main camera for pictures with bright, vibrant colors, especially eye-catching when shooting portraits, flowers. Details and sharpness are also pushed up. If you look at a glance, you can see the image for good definition but when looking more closely at the details, it can be realized that Samsung’s algorithm of sharpening and floating volume has made it a bit too much, causing the image to have a gear phenomenon. Bright range in the image, well balanced between bright and dark areas, retaining many details. However, there is a drawback that photos or excess light phenomenon due to balance is not good.

When shooting in low light, photos are often pushed to brighter than reality. Strong noise cancellation style continues to be used by Samsung. The image has low noise but the detail and sharpness are not high, only the color is still reproduced in a fresh direction.

The 5MP wide-angle camera provides a flexible shooting angle, suitable for portraiture when taking photos of both the scenery and the subject. This camera will also work when you capture buildings or in small spaces. However, the quality of the wide-angle camera of M30 is not high. Photos are pale in color, low in brightness, narrow bands, white balance, and poor details. Compared to color, sharpness, bright range, wide-angle camera are significantly inferior to the 13MP main camera.

In low light conditions, wide-angle cameras with smaller apertures (f / 2.2) clearly exhibit limitations. The image at this time for sharpness, low details, colors suddenly go away. The phenomenon of detailed breakage can be clearly seen when ISO is pushed up but the machine still tries to eliminate noise. However, in some low-light conditions such as under room lights and shooting at close range, wide-angle cameras can produce images that are slightly better than the main camera.

The AMOLED display has affected many factors on the Galaxy M30. Not only does the display improve, the power-saving AMOLED screen also helps this phone to have the top-class battery life in the mid-range segment, while also helping to make the body thinner than the previous generation. Use the LCD screen. Wide-angle cameras for flexible shooting in tight spaces as well as architectural landscapes are also the points that many mid-range devices currently do not have.

Performance is the point where the Galaxy M30 is just enough to use the basic. The camera quality is no better than competing products. So, overall, the Galaxy M30 is suitable for those who want a smartphone with good battery and screen quality for surfing and using normally, no need for heavy gaming. Especially for technology drivers, this is an extremely effective option: good screen, strength battery, stable operation software and reasonable price.