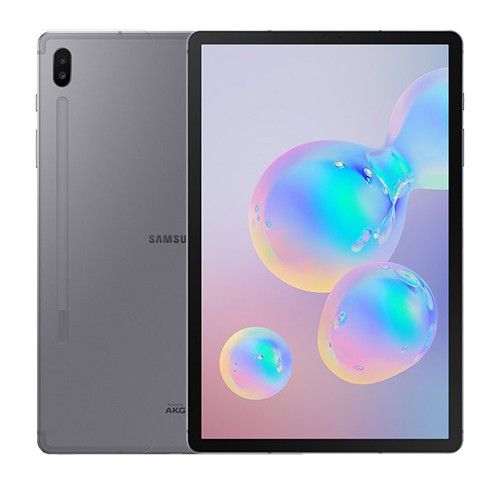 About 5 months ago, I had the opportunity to experience Samsung Galaxy Tab S5e after a long time of not working on any tablet. And my expectations for this product were not met when the machine had a lot of points being ‘cuts’, making the actual use imperfect.

One of the highly appreciated features of the Galaxy Tab S5e is its design, which is one of the thinnest, lightest and most balanced tablets on the market. Samsung knows this should ‘reuse’ always on high-end Tab S6. The machine has an impressive thickness, only about 5.7mm. This thinness, combined with the weight of 420g makes the handset comfortable, helps us use time as well as reduce the feeling of more tired when having to use in other places.

The point that makes me feel unhappy in the Tab S5e and Tab S6 is that these models only have USB Type-C port, while the 3.5mm music port has been removed. Another, not include a USB Type-C headset or a 3.5mm port in these boxes of tablets, which the Samsung Galaxy Note 10 smartphone still has!

This disadvantage is partly reduced by the 4-speaker system located on the bottom and top of the device, giving the volume and sound quality good enough that I do not need to use headphones when watching movies and YouTube videos in used time.

The shortcoming of the Galaxy Tab S5e that many people feel quite disappointed is that the company does not allow the device to support the pen, and that has been fixed in the Tab S6. The new generation S Pen of Tab S6 is manufactured by Wacom, with a thick body so it can hold longer than the Note 10’s pen. The pen placement mechanism is also quite good, when the back has a trace ‘The concave’ has built-in magnets, it only takes a pen close to it and it will stick quite tightly.

In addition to regular notes and drawings, there are a few tricks that are borrowed from the Note 10’s S Pen, such as turning handwriting into machine characters for easy sharing or flicking like magic wand to add application control gestures. The pen of the Tab S6 is bigger so it’s easier to ‘flake’ than the Note 10’s pen, but I personally don’t use it often, so I find it useful sometimes.

Right above the pen is the camera system, which is said to be the system because the Tab S6 has two: a main angle of 13MP resolution and an extra 5MP ultra-wide angle – a ‘strange’ point unmatched on any What a tablet!

The Tab S6’s super wide-angle camera has a viewing angle of up to 12 mm, which is wider than the ones available on smartphones, but both it and the main camera produce good quality photos: slightly pale colors, the definition is just barely enough for web posting and HDR capability is weak. I am not a tablet user to take pictures (usually only used to capture / scan documents), so it will not be too strict in this array or compare it with high-end smartphones.

What is far more important is the front: the screen. If you look at the Tab S6, you can also ‘recycle’ the 10.5-inch Super AMOLED panel (1600 x 2560) from the Tab S5e, but when you use it, you can find two upgraded points. First, the panel supports the HDR10 + standard, combined with the excellent black quality and AMOLED color density that makes HDR videos very vivid.

The next upgrade point is at the bottom of the screen: a fingerprint sensor (Tab S5e uses a capacitive sensor on the side). This is an optical sensor, so it will have to shine light to read the user’s fingerprint rather than the ‘better’ type of ultrasound on the Samsung Galaxy S10 or Samsung Galaxy Note 10, but also in the new generation (like Samsung Galaxy A50s, Samsung Galaxy A30s) should for fast and accurate reading speed.

Image quality of the panel is difficult to criticize, but in the process of using I also found a few errors that make it not perfect. Jelly effect occurs on the screen of the Tab S5e due to the uneven response speed has been somewhat corrected on the Tab S6, but when ‘surfing’ at a certain speed, we can still see it.

On the S6 Tab I found another display error, which is the low color uniformity in the gray tones, making some images appear dark and light. This phenomenon only appears in gray, while images with different colors, or completely black (which AMOLED panels can turn off) are not, but it is also a big enough error to recognize.

Leaving aside these disadvantages, we will learn another advantage of the S6 Tab is the accessory system, including a case and an external keyboard. I like the case of the Tab S6, which integrates a hinge to pull out the kick-stand very firmly.

The stand opening and closing operation is very smooth, and we can put the machine in many different angles, which is convenient for entertainment and work.

The case also has a magnet opening and closing to hold the pen, so it will never fall if there’s a suction from the device.

The key part is also connected to the machine by a magnet, just brought closer will be ‘suction’ very tightly on the side of the machine. This accessory, when experienced in reality, has its pros and cons.

First, when the keyboard is closed, it will not stick to the front of the machine, so it will be able to move as easily as the image below. When held, the user will also automatically fold these two components together so there’s no automatic opening, but the fact that they never stick together completely makes the experience ‘cheaper’.

The typing experience can be described as: Pretty. The buttons that look quite thin, but when pressed down there is a certain distance before reaching the bottom, unlike the butterfly keyboard ‘press like not press’ of the Apple Macbook Pro!

What I find most unsatisfactory is that the language switch is right next to the spacebar, sometimes pressing wrong will switch from Vietnamese to English – which, in my opinion, should be a layer function key 2nd rather than private key.

The ‘feature’ on the Galaxy Tab S6 keyboard makes it different from older models, which is the appearance of a Touchpad. This side is quite small, it is made of plastic, so it certainly will not be able to equal the large touch screen glass on Windows laptops, but the device has it is also a plus point, helping a few operations become faster.

Talking about ‘fast’, is the actual use of Galaxy Tab S6 fast or not? The answer is yes. It has a Snapdragon 855 processor, 6 / 8GB RAM and 128 / 256GB internal memory. With this configuration, Tab S6 does everything ‘instantaneously’ than Tab S5e with Snapdragon 670 and 4 / 6GB RAM. I am ‘more confident’ in placing heavy games like Lien Quan in the best graphics mode, instead of having to lower it to play smoothly on Tab S5e.

where can you get a Samsung Galaxy Tab S6 online

One downside that still exists (without knowing if it is fixed or not) on Android is that some applications are not designed for tablets, so it will only be an ‘enlarged’ version of the smartphone application, losing the advantage of screen area of Tab S6. Sometimes they can not be used in horizontal, forcing users to rotate the machine vertically to manipulate.

One of the ways users can increase the usefulness of the Tab S6 is to enable DeX mode, which you can learn more in this article. To put it briefly, the DeX on Tab S6 is faster than older models, supports multitasking better than regular Android, drag and drop files quickly, works well with shortcuts in the second layer above external keyboard.

Of course, it is impossible to replace laptops for everyone, because Android’s ‘alternative’ apps can’t be as full as the full version on Mac / Windows. A simple example I encountered while using Tab S6 instead of laptop: Lightroom Mobile app lacked a few tools and shortcuts, and the most harmful is the inability to attach Watermark to all photos at once. !

In contrast, with a certain career, using less specialized software, the Tab S6 will surely meet. The tablets also have a big advantage over laptops, which will be useful for some people as the ability to support SIM, can make calls, text and use 3G / 4G networks easily without own transmitter.

With a beautiful design, powerful configuration, and a very complete system of accessories, Samsung Galaxy Tab S6 expresses everything the Korean electronics company can do in the Android tablet segment. It may not be perfect because it still has some of the errors mentioned above, but like the Galaxy Note 10, from birth, it ‘defaulted’ to become the king of a market segment because there are no rivals anymore.

But the question that needs to be asked is: Do you want to buy an Android tablet? Tab S6 met very strong competition from the two big players of the tablet market, the iPad Pro (with the advantage of 120Hz screen, Apple’s hardware and application ecosystem) and Microsoft Surface (with Windows operating system is still the No. 1 for work). This question may be answered by each person with specific usage methods!