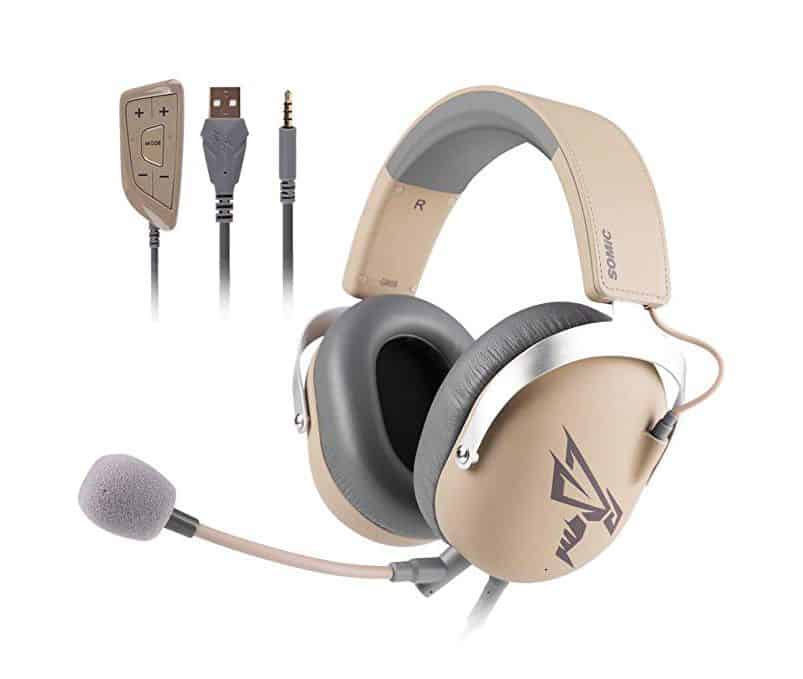 The box of the G805 is indeed very large, but it feels light in the hand, which proves that the headset is not too high weight, which may be an advantage in comfort.

Opening the box, we found the following accessories: a large canvas bag for carrying headphones everywhere (pretty good quality), an external mic using a 3.5mm port and a controller.

This controller has 2 heads, a 3.5mm input to plug in from the headset, and a USB connector for use with a computer. This is a great design, enabling users to use the G805 with mobile devices using the 3.5mm port, or attach it to the computer during computer sitting.

On the controller, there are 5 buttons, 2 sets of buttons to control the volume of the headset and microphone, and a button with LED to adjust the sound style, including 3 types: Multimedia (for movies and music), PUBG and Game MOBAs.

These headsets come back to Somic’s strong, rugged design that looks more like a noise-canceling headset for soldiers in the military than a regular headset! On the outside, there’s the Stinco logo, a gaming sub-brand of Somic.

As mentioned above, the headset is very light – accompanied by a thick head and ear cushion, so when worn on the ear … it almost feels like it’s wearing, very comfortable! This is a prerequisite for a pair of entertainment headphones, enabling users to use for hours without feeling stressed or tired.

The microphone section is attached to the left ear, which can be bent to suit each person. When playing games we can also completely remove the mic to not cause problems.

where can you get a Somic G805 online

Somic G805 is a pair of headphones that clearly embody Somic’s gaming product design philosophy: military design, focusing on user comfort and sound quality can be varied. Moreover, we also have the advantage of being able to use with 3.5mm jack or USB port, so anyone can plug into your favorite device. The downside of these headphones in particular and other gaming headsets is that the quality of playing music can not be equal to those dedicated to music, but in return, the quality of watching movies and gaming is a big advantage.

– There is a removable mic

– There are separate audio presets

– Price is also marginally better than the average of Somic