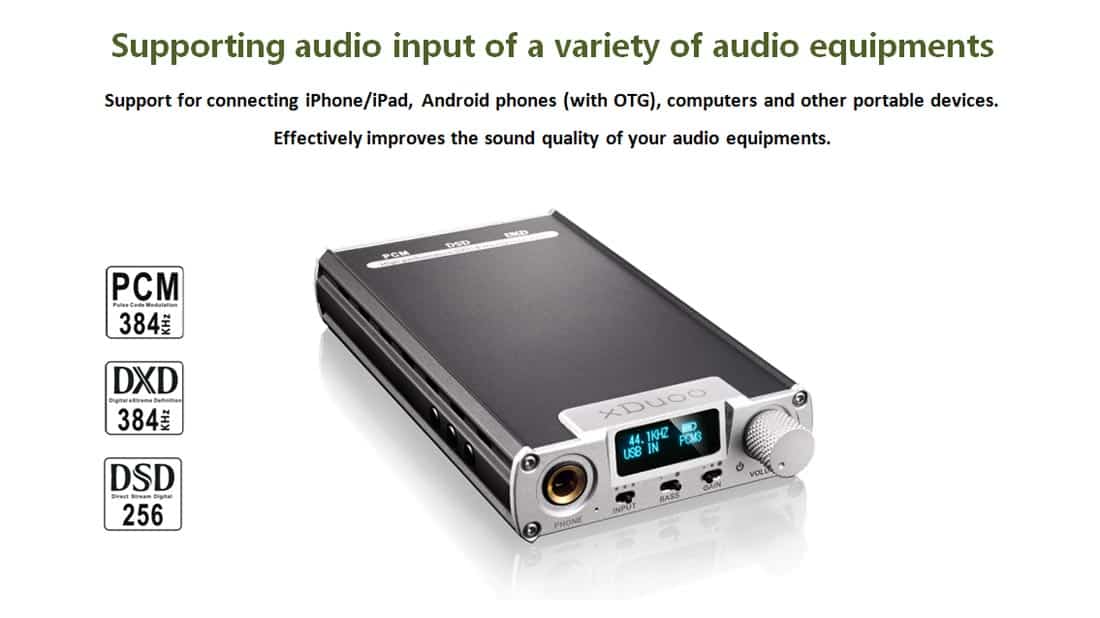 Xduoo XD-05 was once a legendary DAC / AMP in the $ 200 price range when it had good decoding capabilities and a powerful built-in amplifier capable of pulling large impedance headphones. Following that success, Xduoo has just launched the next version called XD-05 Plus with many improvements both in appearance and internal configuration. One of the most appealing things about the XD-05 Plus is that the measured output power at 32ohm is up to 1000mW, making this handheld DAC / AMP a real monster. To find out the truth behind it, let’s follow along with this article.

Although the shape is quite similar to the old version, the Xduoo XD05 Plus still has its own remarkable features. The first is that the outer shell is completely silver, the surface treatment of sandblasting creates a more delicate and seamless feeling. The body is still made entirely of cast aluminum, the front and back are both thick aluminum plates. The position of the logo and the printed part of the product have been misaligned.

The front part of the layout and control lever layout has not changed much from the old version. We still have huge gold-plated 6.3mm headphones. An OLED screen displays information, control switches, and a volume knob and power switch. However, instead of the previous input lever position, XD05 Plus has a new function called BOOST. The input selection button has been taken down to the side of the device.

The biggest change on Xduoo XD05 Plus compared to its predecessor comes from the back, which contains the input. The USB A connector in the past was a bad design that I found the XD05 has been replaced with a much more compact and flexible USB Type-C port. The charging port from Micro USB has also been upgraded to Type-C as well. The position of the digital input and the AUX in / out ports remains the same.

On the side of the machine, there are 3 buttons to adjust input, SRC and filter mode are redesigned to look neat and refined than the three-round buttons on the old XD05.

Overall, the XD05 Plus is a smoother and more complete version of the design, but still holds the features of Xduoo’s brand.

Anyone who has known Xduoo XD05 before will be more interested in the internal organs of this legendary DAC / AMP than its rough appearance.

On the decoding layer, Xduoo XD05 Plus is upgraded with XMOS’s new XU208 signal receiver chip for compatibility with diverse devices and convenience. For devices running from Windows 10, there is no need to install manual drivers like before. Xduoo XD05 Plus also supports other operating systems versions such as Android, iOs, macOS …

Xduoo XD05 Plus uses Asahi Kasei’s AK4493EQ decoder chip for detailed sound and better instrument extraction. The decoding ability of XD05 Plus is 32bit / 384kHz PCM, DSD256 Native when plugged in via USB. The coaxial road also supports the DSD64 standard which is more advanced than the old version of XD05.

A notable thing about Xduoo’s XD05 series is its ability to replace op-amp in the amplifier stage. This is why the kit comes with a set of screws to prevent loss of screws when assembling the device -very praiseworthy for Xduoo.

XD05 Plus op-amp socket supports both dual-opamp and single opamp, extremely convenient and this is a perfect point for DIY enthusiasts. There are very few big-name brands doing this on their products right now. Each op-amp will produce a different sound color like the replacement of the bulb on the electronic light amplifier on the previous day. The default on XD05 Plus is TI OPA1612.

The sense of ownership of the device is raised to a new level, satisfying both the sound and the curiosity of the user.

(Note, removing the device during warranty will tear the warranty stamp, please consider the warranty benefits before proceeding to open and remove)

The headset used is the Cayin YB04 with high sensitivity and low impedance to check the purity of the source. Next is Sennheiser HD650 to test the ability to pull the heavy headphones of Xduoo XD05 PLUS.

When plugged into HD650, Xduoo XD05 just showed its true nature. Due to the high impedance and moderate sensitivity of the headphones, the background noises almost disappeared even in high-gain. XD05 Plus has no stuttering when switching on and off like cheap amp thanks to good circuit design.

In terms of sound quality, the overall evaluation of Xduoo XD05 Plus is very solid, powerful, balanced but still rich in music, smooth, detailed, and very good in the price range.

Bass range: With a hard-to-pull ear like the HD650, when plugged into the XD05 Plus, it still delivers a rich bass sound. The bass is good and has good tension. In tracks with lots of stacked drum sounds like Gojira’s Drum Solo, the XD05 Plus still controls and keeps everything separate. The bass is smooth, not clumped in the mid-bass, making the sound very full and comfortable.

When turned on the bass boost mode, the bass range is enhanced at approximately 400Hz to make the sound deeper. There was no ringing or buzzing as I thought there would be. If anyone likes a more exciting sound quality, the use of bass boost mode on XD05 Plus is entirely possible.

Mid-range: Clear, smooth, and detailed. Experiment with Cayin YB04, an extremely balanced and neutral headset, shows that the mid of the Xduoo XD05 Plus is almost colorless. Even the high-mid section was not pushed up or tried to make the singer’s voice come forward to impress the listener. The sound of the instruments in the track is silvery and has extremely impressive detail.

Treble band: The treble on XD05 Plus has a good opening, rich in energy, making the 3 negative bands become harmonious and symmetrical with each other. The treble is soft, brittle, and also quite smooth, not harsh. I have noticed that there is a slight difference in this tonal range when left in mid-gain and high-gain mode when compared to low-gain. In the low-gain, it seems that the treble of XD05 Plus is a bit more in volume, brighter while in the mid and high gain, the bass range is slightly enhanced while the treble is narrowed. There is not so much different that it affects the overall sound of the XD05 Plus.

Xduoo XD05 Plus does not support Bluetooth but Xduoo has promptly launched a module called 05BL to support this wireless feature. 05BL will also support the first XD05.

The Xduoo XD05 Plus is a portable DAC / AMP that powers the desktop DAC / AMP. This product will shatter doubts when you buy a high impedance headset.

Fully upgraded inside-out of the famous XD05 version, although there are still some limitations overall, the XD05 Plus is still an extremely worth buying product.

– Ability to replace op-amp 2 in one.

– Background sound is not static with high-sensitivity headphones

where can you get a Xduoo XD-05 Plus online