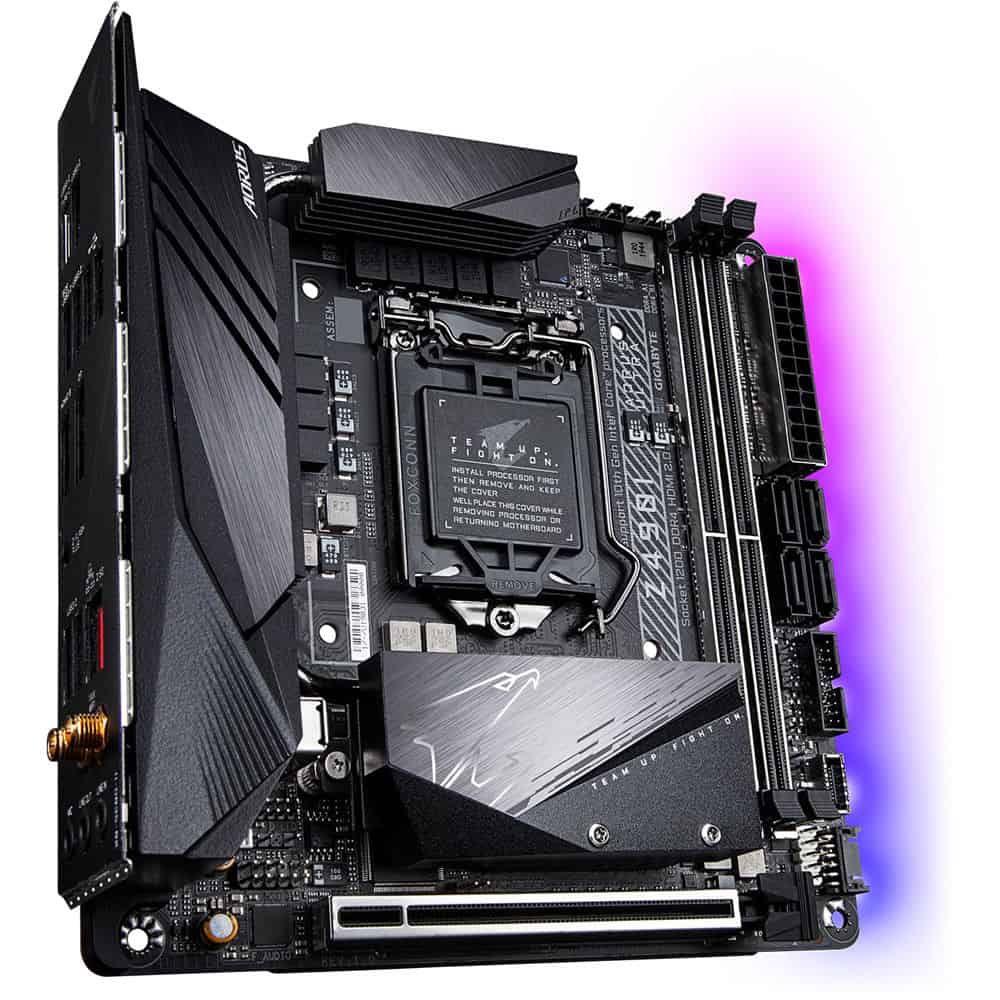 Z490i Aorus Ultra is a main board with Factor ITX form, suitable for those who love a compact system geared to the needs of gaming and everyday work. This board is still supporting newest Intel Core i10. Besides, there are many functions like Wi-Fi AX (Wi-fi 6), network connection with Intel 2.5Gbps and some other advanced features

The box of Z490i Aorus still carries the outstanding packaging style of the Aorus, with a range of light and a large Aorus symbol in front of the box. There are also trade names and two technical logos.

On the back, it is still a place for manufacturers to promote the outstanding features available on the product.

In this Z490 season, GIGABYTE has chosen to return to the simple, sophisticated style of applying the Z490i Aorus Ultra with a rough black tone and some lighter, simpler, less shiny details like its predecessor Z390i Aorus. Notice that the heatsink has now been linked into a mass connected by a chrome-plated copper tube. At the same time, the cover for the rear I / O cluster has covered the entire I / O port, not as empty as in the previous generation.

10 Generation Intel Core CPUs are powered by an 8-phase power supply, each capable of delivering up to 90A of current. All MosFETs are equipped with heat sinks, which still uses a monolithic design that will free up the heat exchange surface.

Like all other ITX-sized motherboards, the Z490I Aorus Ultra still only has 2 DDR4 RAM slots (supports XPM up to 4800MHz) covered with a reinforced metal frame and no built-in RGB backlighting. It is clear that the 24-pin ATX power connectors and other connectors are all tightly packed in a very small area.

On the Z490 series motherboards will come with PCIE 4.0 Ready notes. However, due to still using Sky Lake architecture, this series of Core 10 processors will still only support up to PCIe 3.0. As we have noted, it is not until the 11th generation that a new architecture (expected to be released by the end of the year) will enable the high-speed bandwidth of PCIe Gen4.

The M.2 NVMe PCIe SSD chipset and memory modules are cooled by the same heatsink assembly, in which the aluminum block in direct contact with the chipset is connected to the MosFET heatsink with a copper pipe.

And finally, in the overall design is the layout image of the I / O ports behind the main. As you can see the audio has been relaxed with only 3 3.5mm jacks, besides that it still has all the other ports like USB 3.2 Type-C and Type-A, including picture output. DisplayPort and HDMI images and RJ45 2.5Gbps ports. In the next section, we will learn more about each component on this product.

This heatsink is coated with a matte black paint, not too fussy in appearance when it is just a piece of aluminum that is sawn free to increase the area in terms of heat dissipation.

Underneath the base is a 7.5 W / mK LAIRD Thermal Conductivity Pad.

It is still a cramped space with lots of clusters of components close together due to the characteristics of ITX dimensions, even some components must be moved to the back of the PCB.

8 phase power VRM cluster with Intersil ISL69269 controller and 8 MosFET Smart Power Stages ISL99390, in which each VRM is capable of providing voltage up to 90Ampe for a total of up to 720Ampe voltage. A figure sufficient to handle with any 10th-generation Intel Core processor, but ideally suited to this motherboard is the Intel Core i7 and Core i5 series of processors. And it is impossible not to mention the Tantatum filter capacitor to ensure a clean power for the CPU. Particularly for IGP (integrated graphics) is also provided separately through a phase of DrMos 50A.

Intel Z490 Express chipset and the first M.2 slot (managed by PCH), there is still a second M.2 slot under the chipset managed by the chipset, both of which have to be configured. RAID 01 or 10 to increase data transfer speed or protect data security according to user needs.

The Realtek ALC1220-VB 120dB (A) SNR audio control chip with Headphone Amp automatically optimizes sound quality based on the type of headset connected to the system.

There’s no RGB backlighting on the top, but the Z490I AORUS Ultra still supports connecting to ARGB devices via a 3-pin ARGB header and 4-pin RGB. In addition, the back of this motherboard is still equipped with RGB leb lights.

where can you get a GIGABYTE Z490I AORUS ULTRA online