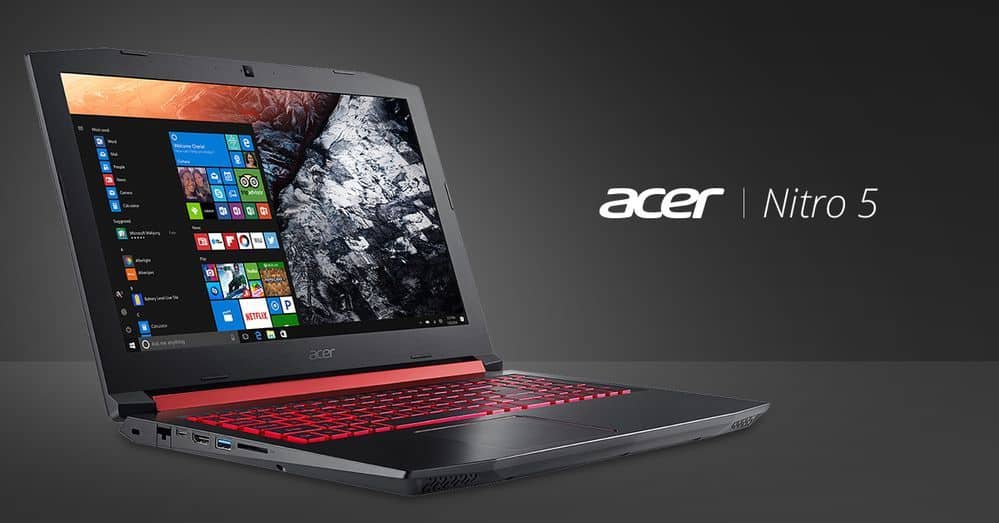 Acer Nitro 5 basically has a shell made of plastic, which is quite noticeable in the cheap gaming laptop. Manufacturers have also added their own breakthroughs on this machine to bring coolness to the overall design. The surface of the Nitro 5 with scratched metal imitation, while beveled slightly on both sides, giving a sense of angles and holes.

The main color of Nitro 5 is the black color that dominates the entire body. In parallel it is the hinge area, the keyboard and the touchpad are a bit red, highlighting the device as well as implicitly asserting that this is a dedicated gaming machine. The structure of the Nitro 5 is very solid, the hinges are definitively folded and the palm rest area and the keyboard are not creaking when using force as well as typing.

The left side is where the power port is located, two USB 2.0 ports and a 3.5mm headphone jack.

Nitro 5 heatsink – inside is two large fans with 2 copper tubes for simultaneous cooling of the CPU and GPU.

Acer Nitro 5 is not a machine designed to be small, lightweight, easy to carry. Instead, the machine weighs in at about 2.5kg and is about 27mm thick. In general, if you are used to using gaming laptops, Acer Nitro 5 will not be too inconvenient for the user.

The Acer Nitro 5 is equipped with a 15.6-inch Full-HD anti-glare screen, although it uses an IPS panel, but the viewing angle is only good when viewed face-to-face or oblique from the bottom. The other 3 corners left / right / top down, the color is slightly faded, although the writers are still able to see the content. The maximum aperture of the screen is about 170 degrees, enough for basic needs today. Preliminary assessment, the screen of Nitro 5 has the color and sharpness just enough to meet the needs of today’s gaming experience or movies. The most regrettable point is the screen brightness of Nitro 5 is not high, this sometimes makes the screen feel sunk than other laptops. In addition, if you use the machine for the editing of images or video then the user should calibrate a bit for accuracy. Using dedicated color rating software, Nitro 5’s screen achieved 68% of the sRGB color range, 50% of the NTSC color range, 52% of the AdobeRGB color range, and an average DeltaE of 1.02.

The keyboard backlight is red, with a fixed brightness level.

On the whole, the keys on this machine are large enough (15×15 mm) for comfortable typing, the letters on the keys are painted red as well as the backlight is red, making the eyes feel good when using. This is the result of the combination with the dominant black / red color of Acer Nitro 5.

Unlike conventional laptops nowadays when the 4 arrow keys are made quite small and narrow which makes users have a lot of difficulty playing specialized games, Acer has made these keys on the Nitro 5 is wide Spacious, comfortable, and instead narrow the Shift key (which is very rarely used). One point to note is that the up arrow is very close to the Shift key, the new user can often hit wrong, but then can be accustomed to anyway because the Shift key does not affect much if press wrong key.

Typing on Nitro 5 is absolutely comfortable due to the moderate key stroke, good elasticity. In addition, the chiclet keyboard on the machine also help to limit the phenomenon of typing wrong. Acer also has a 26-key system that supports up to 120 characters per second of typing speed or plays games that require more keys at the same time.

The touchpad on the Nitro 5 stops pretty decent sized with rounded red borders for good swipe, touch and hit. However, when used for a long time, the touchpad is slow and responsive. As a gaming-oriented laptop, users are expected to be equipped with an external mouse to maximize control, so the writer does not bother too much about the touchpad area on Nitro 5.

Acer Nitro 5 has a number of popular connectivity options including three USB ports (one 3.0 and two 2.0 ports), a standard HDMI port, a LAN port, an SD Card slot and a jack 3.5mm headset. Typically USB Type C ports are also present on this model, unfortunately this is just a normal connection port, not standard Thunderbolt 3 and also can not be used to charge the laptop. Finally, Nitro 5 is also equipped with a 1 megapixel camera for video call demand on Facebook Messenger or Skype. However, if you are looking to stream games, you should consider using a quality webcam.

With the full-HD resolution screen, Nitro 5 easily passes the tests of online games with the highest graphics setting with stable frame rate (fps).

Finally, the amount of RAM and VRAM not high (8GB and 2GB) led to the ability to experience offline games that require high hardware configuration is greatly reduced. Users should consider the possibility of upgrading RAM later or choosing a more advanced model that owns an Intel Core i7 processor, SSD (for faster download speeds) and a GTX 1050ti graphics card with 4GB VRAM.

The Acer Nitro 5 uses a 4-cell Li-Ion battery and unfortunately is not removable for innovation after long periods of use. In general, the battery on Nitro 5 just enough to meet the basic tasks outside the game such as surfing the web, typing text … If used to play heavy 3D games and need continuous Internet connection as typical Blade and Sould, the Nitro 5 can only “stand” for up to an hour. In order to optimize the gaming experience, users should connect the device to the charger adapter, while not worrying about the amount of battery life, in parallel it is limiting the downside of the fps when the heater is overheated.

where can you get a Acer Nitro 5 online

Acer is equipped with Nitro 5 TrueHarmony speakers with Dolby Audio Premium cinema sound technology, which is expected to bring gamers the best gaming experience. In fact, the speaker on this laptop is quite loud, medium sound, not very prominent for the needs of music. At the price of Nitro 5, it is difficult to demand a high-end audio system that only appears on high-end gaming laptops, so it’s better to wear a gaming headset to get the best experience

The Acer Nitro 5 features dual fan heat dissipation with two fans located on the bottom to speed up the fan speed and theoretical thermal dissipation of 19% and 11%, respectively. Actual use shows Nitro 5 with basic tasks like watching movies, surfing pretty cool, quiet running machine. However, when it comes to gaming, the fan is quite loud, which greatly affects the player’s ability to experience the sound and in a number of dedicated titles that require listening to sound. Accurately equipped with a dedicated headset is essential. No problem, but the temperature of Nitro 5 when playing the game is quite stable (due to CoolBoost technology). Specifically, playing the game 2 hours, the upper half of the keyboard warm up, while the under half is still pretty cool, comfortable.

The Acer Nitro 5 for the basic configuration featured in the review is a good choice for students who need a laptop not just for learning, but also serve his passion for the game. Regrettably, with a subtle design, good keyboard, Nitro 5 stick a few “grains” affect more or less to serve gaming needs such as modest RAM, the noise of the machine when playing high, make experience the sound from the speaker is not complete.

– The fan is very loud

– Plastic case is easy to stain.

One thought on “Acer Nitro 5”