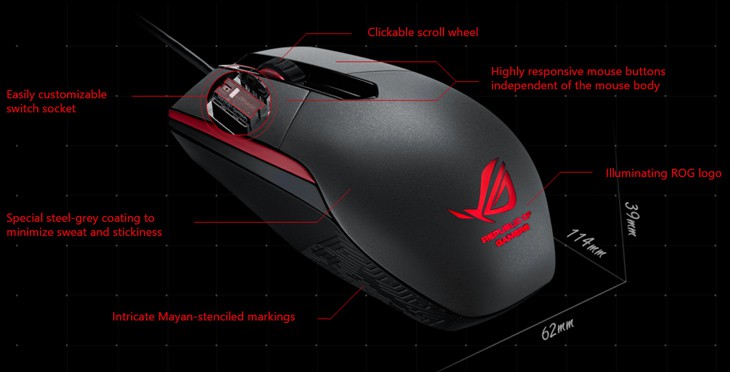 Aimed at gamers who do not have the financial resources but still want to use a high-quality ROG brand product, the Asus ROG Sica has done its job successfully.

Asus has added a new gaming mouse to their lineup of peripherals – the Asus ROG Sica. Inspired by ancient history, Asus named its gaming mouse after an ancient weapon.

Sica comes in a typical ROG-branded box, very similar to Gladius. The image of the mouse is printed on the front of the box.

The back of the box shows some of the specifications of this device.

Inside the box, the mouse is housed in a transparent plastic case, two ROG stickers, and a quick guide.

The packaging is pretty basic, with no extra accessories, unsurprisingly it’s the most affordable gaming mouse from ASUS.

ASUS says it designed Sica for MOBA games, such as LOL and Dota. The mouse is also aimed at gamers who prefer the fingertips grip, due to its small size.

As a budget mouse, the Sica has no special features other than the standard mouse buttons. It has left and right buttons, a middle button/scroll wheel, just like any other standard mouse on the market. No side buttons, no DPI buttons, and no extra weights. I was quite disappointed by the lack of side buttons since it’s a feature most mice today have, even the budget mouse. These buttons are useful both during games and when doing office work or while browsing the Web.

I have used Sica in a variety of games ranging from RPG to MOBA and FPS games. The mouse worked well, I didn’t experience any jerky or delay, the experience was generally quite smooth.

ASUS ROG Sica is an affordable gaming mouse, with excellent performance and basic customization options. The overall performance of the mouse meets most of your gaming needs. The most prominent downside is probably that the side buttons have been omitted. Personally, I use these 2 buttons a lot, even in games like LOL, so maybe this mouse is not suitable for me. However, Sica is really suitable for those on a limited budget, who do not care about redundant features but only need 1 mouse from big brands, stable and accurate operation. If that’s what you need, Sica is the brightest option.

where can you get a Asus ROG Sica online