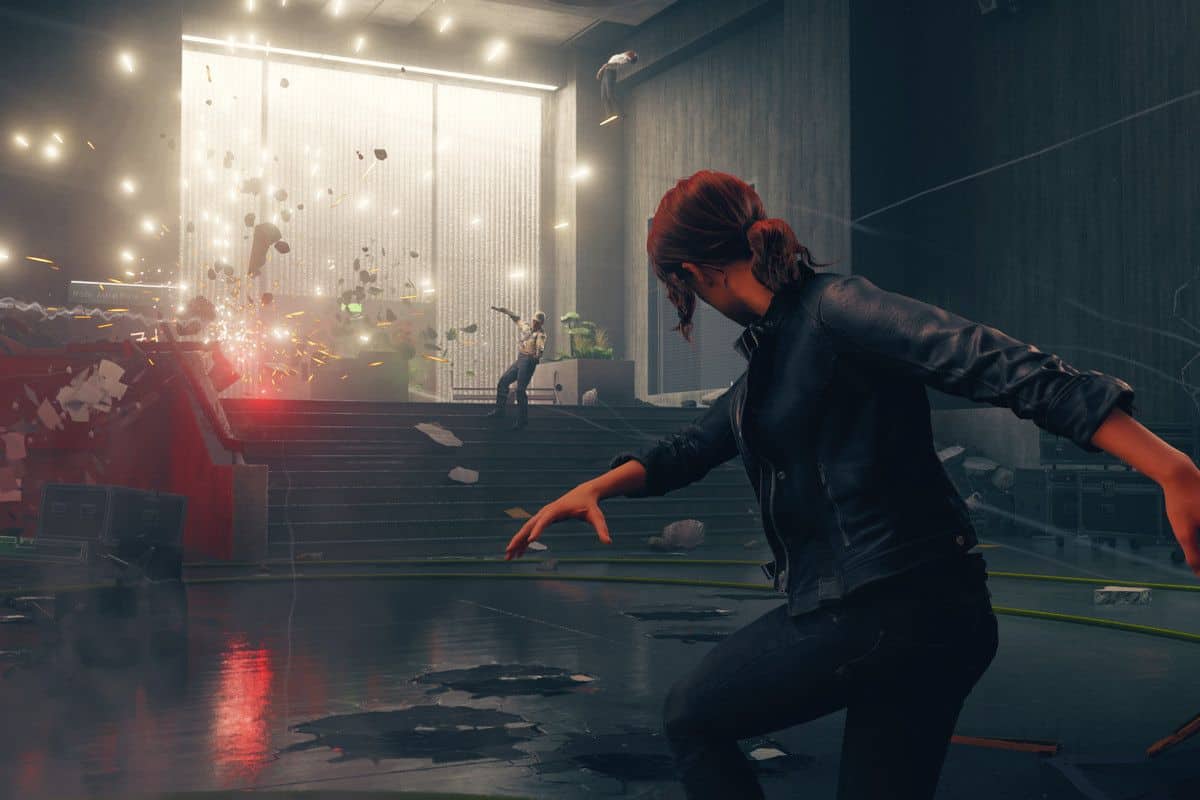 You, Jesse Faden, go to the Federal Bureau of Control (FBC) to find the whereabouts of your long-lost brother Dylan.

While confused in the context of Control, an unexpected event occurs: the FBC executive Zachariah Trench commits suicide, Jesse enters his room and retrieves Service Weapon – one of the Object of Power.

This inadvertently made Jesse succeed Trench and become the next executive of FBC.

After that, players will be caught up in a new problem that is happening in this building: repelling Hiss’s invasion and protecting Oldest House – FBC’s headquarters.

With a “dizzying” start, you’ll ask many questions in your head: Why was Dylan taken away? What is Hiss? Why did Jesse get into this house? … However, these questions were not answered during the game but also became more complicated when many new characters were introduced.

To make up for these gaps, Remedy incorporates many pieces of the past to the present through Jesse’s conversations.

However, the company was overdoing it when any interaction between Jesse and the environment was shown with speech, including the fact that she did not trust others.

This makes the main personality’s character less interesting and does not have any highlight, because the player will lose surprise for Jesse, always know what she wants to say and do.

Not only that, the characters in the game are a bit “frozen” when almost never express their emotions, in contrast to the voice – which is quite excellent voiceover.

Jesse Faden had a sharp face almost every time as if she was angry at something, even when feeling guilty with a trembling voice. Emily Pope looked quite “awake” even though the lines were surprising, serious … and the mouth movement was a bit weird too!

At a glance, Control’s plot and context are intriguing: deciphering the strange supernatural phenomena that exist in Oldest House, revealing Jesse Faden’s past, the connection between her and the organization.

However, Remedy was unable to tell this haunting story just because of the narrative and character building … oh!

Of course, bewilderment is not the only word to describe Control, because the game also makes you mislead in a space that looks small but difficult and difficult to grasp.

First of all, we have to mention how to build the world of the game. To increase the authenticity and bring players into the game, the developer has removed the minimap completely and you must completely rely on the signposts to be able to get to where you want.

In theory, this is a very good idea. However, the way the game works is not really good.

Players will have to pay close attention to and note the dialogue of the characters to know where they need to go, because the game has absolutely no summary for players to read again.

Worse, you will not be able to see a map of the entire area, but only the floor you are standing on. Therefore, if there were any quests on the other floor … continue to search!

Of course, in the process of navigating, you will not be able to go exactly only the first time, sometimes you will encounter many barriers that you can only go after reaching a certain level in the task main.

At this point, the second design error is revealed. The game uses too much red light to show too many things in the game screen: Hiss – strange force is shown by the characteristic red smoke that prevents players from moving, Hiss-infected enemies possess a protective ring red and red parts on the body, an odd red light signals a danger room and a red screen when you’re low on blood.

At the beginning of the game, you will be confronted with a room full of red light filled with enemies, your task is to defeat all the monsters in the room and purify the red zone, creating a safe area.

Sometimes, red corridors / rooms continue to appear, but it is only light from the lights that show no signs of harm.

This will confuse the player by not knowing when the red light appears, should you enter or should you avoid? What does the game want to say to our through this?

The use of too many dazzling colors also makes the player’s eyes uncomfortable, especially when you enter a red room, the enemy is also surrounded by a red shield and your screen is also red because of low blood.

All combined will make you feel very uncomfortable and can not play normally. Not only red, the furnace’s fire effect in the side quests is also extremely uncomfortable when you have a yellow particle effect that surely you will not want to get any closer to!

To be frank, Control owns a gameplay that is quite sketchy and greatly affects the user experience.

The fighting mechanism of the game at first is quite good: use super powers to move and attack the enemy and then use guns to kill them. In addition, players are also allowed to freely change weapons or themselves with accessories (mods) that randomly drop when destroying enemies and upgrading skill trees to enhance themselves.

However, after a few hours of playing, the player’s fighting style remains the same and despite the fact that you spent a lot of points to upgrade to the skill tree, as well as attaching quite a lot of accessories to the gun.

Although the Service Weapon can transform many guns into many different types: pistols, shotguns, submachine guns, aiming guns … except for the barrel of the gun, the entire weapon retains the shape of a gun pistol.

Not only that, the use of these guns is not too different because you only use them when your mana expires with special abilities.

Sometimes, just the basic Grip (pistol) is enough to help players pass the screen gently. The type of weapon mod dropped in the game is not too special, most do not create too many highlights so you can feel the big change, especially with low quality mods.

The small plus point for Control that players will probably feel is the super power of Jesse: the ability to spiritually lift objects / enemies, throw them and deal high damage.

The more you upgrade this ability, the more you will control more types: rockets, low-blood enemies … and greatly increase the damage of objects. Later, you can also create a circle of soil around yourself to protect yourself.

This hegemonic superpower will completely overwhelm Jesse’s gun, even when the early game of throwing damage also surpasses shotgun damage.

When upgrading throwing damage, you can completely kill almost every enemy with just one attack. In addition to the well-equipped ragdoll physical system, nearly all players will use this skill to fight without using guns too much.

Next, another double-edged sword that the company puts into the combat mechanism is that you cannot restore health and can only recover with Health Element dropped when destroying enemies.

Theoretically, this is a pretty good idea, putting players in dangerous positions to create challenges and urging players to destroy more enemies, high risks to receive higher rewards. The same has been applied quite successfully to Doom with the ability to heal when destroying the enemy.

In addition, the game does not have healing equipment for players to use in emergencies and ambulance stations (oddly, this is the Federal Control Department but not equipped with any medical equipment).

where can you get a Control online