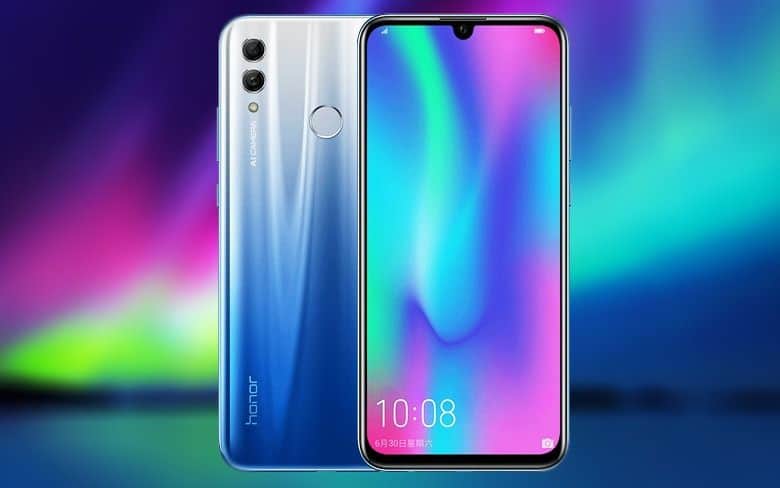 The design is noticeable with the fancy back

Appearance is the first spotlight on the Honor 10 Lite. This model continues to use glossy backs with light streaking effects, combined with blue almost become a “specialty” on Huawei and Honor smartphone models. This color, though not too new, is still the point that makes this model more prominent. If you prefer the difference, users can choose the silver-blue version with gradient transition effect.

On the front, Honor decided to switch from “rabbit ears” to “water droplets” with relatively thin borders. Of course, the chin is still the thickest place, and this is also a factor to distinguish between common and high-end machines besides microUSB port instead of Type-C. “Water drops” are the trend of Chinese phones. Anyway, without the 3D face scanner camera, there’s almost no reason for phone companies to use the controversial “rabbit ears” design of the Apple house.

Despite the eye-catching appearance, when holding 10 Lite in your hand, you will immediately feel the poorness because the body only uses plastic material for both the frame and the cover. In terms of ruggedness and rigidity, 10 Lite cannot be equal to the 8X “elder” with metal frame, glass back. The gauze removal part is somewhat in the grip feeling on the model, which is not a point to cause the back is strongly curved at the edges. The junction between the frame, the back face and the screen is tight. The screen does not rise too much compared to the frame and the plastic material also makes the machine less slippery.

At 6.21 inches Full-HD + resolution, 19.5: 9 aspect ratio, IPS LCD panel, the Honor 10 Lite screen offers a decent experience. This screen has high brightness, can be used outdoors. The color in the direction is a bit bright, flattering, contrasting, wide viewing angle, less discolored, less brightness when viewed at a narrow angle. Another plus is that the border is quite thin so the display space is airy. The design of water droplets even though the contents are also less likely to cause eye problems like “rabbit ears”.

The Honor 10 Lite has a speakerphone on the bottom edge with a high volume, less prickly or distorted sound when maximizing volume. This speaker can be used with listening to light music, watching romantic movies or listening to current news. Higher requirements like playing games, watching action movies, listening to music EDM … will need good headphones. But note that the device does not have a built-in headset that you will need to purchase.

As mentioned, the Honor 10 Lite has the same parameters as the Honor 8X: the mid-range processor developed by Huawei is Kirin 710. This is the processor that Huawei upgraded to Kirin 659. Previous system: 12nm process more energy-efficient, with more high-performance Cortext A73 and GPU processing cores.

On benchmarking software, the Kirin 710 outperforms Kirin 659 and is on par with the Helio P60 and Snapdragon 660, only slightly below Qualcomm’s processor for graphics processing capabilities.

In actual use, Kirin 710 and 3GB of RAM on the Honor 10 Lite handle relatively smoothly common tasks. Using gestures instead of 3 navigation keys is also smooth. Speed ​​of face detection, fingerprint lock opening are both nimble. However, the amount of 3GB RAM will start to fall short when you open multiple apps and websites at once. Then, the reload condition will happen quite often.

Kirin 710 handled quite well the games on the current Android platform. Try with a heavy graphics game that is not locked frame rate is Dead Trigger 2, it reaches a maximum frame rate of 60 fps with good stability: 95% at the highest graphic setting. However, with Warhammer 40,000: Freeblade, the Honor 10 Lite is only 43 FPS with 49% stability, lower than the Honor 8X.

With familiar online games, PUGB Mobile, the Honor 10 Lite offers a decent experience with a 30 fps frame, 94% stability. Note for PUBG Mobile, you should only play at the graphic level Balance, if trying to push up the level of HD graphics, Honor 10 Lite will be very jerky, lag, hard to play.

Software does not have many new points

The biggest advantage of EMUI is probably the powerful search bar, smooth operation, quick access by swiping down on the home screen. From here, you can quickly search for applications installed on your device, contacts or convenient settings.

Party Mode, which allows you to combine multiple Honor 10 Lite into a portable speaker system with various audio channels that appeared on the Honor 8X, Nova 3i is also available. However, the Game Suit app store to optimize the gaming experience and block notifications to disturb the playing process is no longer on the Honor 10 Lite.

Battery life is comfortable enough for the whole day

Honor 10 Lite has 3,400 mAh battery, does not support fast charging. The 5V / 2A charger comes with it taking about 2 1/2 hours to fully charge, the first 30 minutes charging about 30% of the battery and 1 hour charging 55%. The lack of fast charging and USB Type C charging port is a pity on this product when many of the same price range machines support.

where can you get a HONOR 10 LITE online

The main camera is of good quality, impressive selfie camera

The Honor 10 Lite features a dual camera on the back including the 13MP f / 1.8 main camera and the 2MP f / 2.4 secondary camera to capture the image depth that supports the capture of the font feature. The highlight of the imaging capabilities of this product is the 24MP front camera f / 2.0 aperture, 1.8μm pixel, featuring 4 pixels as 1 to improve the ability to capture low light and support artificial intelligence (AI) to identify shooting contexts.

The Honor 10 Lite’s image quality is close to the Honor 8X. The image shows true color, bright band and smooth contrast, good detail. AI images improve slightly on the freshness as well as balance the dark areas in the image, but the detail decreases as the resolution is reduced to 8MP, not the 13MP image as the other modes.

AI features can turn on and off before and after shooting. Turning off AI mode is quite convenient, just touch once on the camera interface so you can actively change as you like.

When shooting in low light, 10 Lite for lower quality 8X. The color no longer holds the correct amount, the detail is reduced, often back. AI mode also does not save the detail problem in addition to improving the brightness and color slightly.

It has a Night mode with how it works similar to Google’s night mode on Pixel phones. In this mode, Honor 10 Lite will stitch multiple photos at different exposures to create the final bright, detailed, brighter colors and a wider range of light. However, the limitation of Night mode is the slow processing speed, usually takes 3 to 5 seconds, so it is easy to shake hands and blur if there is a moving object in the image.

Thanks to the dual camera, the Honor 10 Lite can capture fonts quite well. Photos are faithful colors, many details and subject edges are erased relatively naturally and smoothly. However, photos with subjects that are too close to the background, or the background is a bit complicated, the machine does not separate well. This mode is also not suitable for low-light shooting because the image significantly reduces quality.

Although only a 24MP front camera is available, the Honor 10 Lite can still capture selfie to remove the font. Even, the mode of removing fonts is the default mode of the front camera. Selfie photos impress with high detail, wide light band, colors also follow natural orientation like the rear camera. Like the rear camera, when you turn on AI, the selfie image will be brighter, the face will be made brighter and unexpectedly, the resolution will remain the same at 24MP, not be down so the details will remain high solution. However, the beauty mode is slightly sketchy. There is only one pull bar to beautify the face, without deep customization of eyes, nose, mouth, chin … like many smartphones.

It is noteworthy that the front camera will always turn on the HDR feature to help selfie images significantly improve the light band, especially when shooting backlight, light difference. However, users cannot turn off HDR, unless using face lighting effects such as Portrait Lighting or enabling font deletion, the new HDR is disabled.

In the segment of $200 -300, extremely fierce competition with dozens of products from many different phone companies, it seems that each company has found its own direction. If Xiaomi is famous for its high-profile phones, good performance, suitable for battle games, Oppo focuses on products with selfie cameras, Samsung is back with Samsung Galaxy M20 model with “strength” battery. Honor seems to be steadfast with its striking, fancy design strategy, camera investment, just enough performance.

With the Honor 10 Lite, this is even more confirmed when the product has a strong design power. Camera with many rich features, aimed at subjects who like tinkering with good quality both before and after. Performance and battery life are good enough to provide a good experience at most familiar tasks.

Of course, those who prefer to design metal and glass, gamers, who focus on performance will be hard to be satisfied with this smartphone. Besides, the camera’s low-light shooting capability, fast battery charging and USB Type-C port usage are also the points that Honor needs to improve to convince more people.