The Galaxy S10 + has been renewed in design, creating a more grip-like feel and adding a wide-angle camera to capture interesting landscapes and architectural spaces.

For 10 years, Galaxy S is a high-end line that is full of Samsung’s new and most eye-catching designs. This year is no exception. Many new things have been introduced into Samsung’s Galaxy S10 line: perforated screen, ultrasonic fingerprint sensor and wide-angle camera. Meanwhile, other basic factors such as screen, performance and battery are also improved.

Design: perforated instead of “rabbit ears”, the screen is less curved and more harmonious

Perforated screens are not as annoying as “rabbit ears” screens, “water drops” or “U-shaped”. But there is a noticeable detail that the network symbol and battery on S10 + are pushed out in the middle, looking uncomfortably like a rabbit ear screen or “water drop”, these details are still in the right corner. Samsung allowed to hide the hole but so the “forehead” of the machine is quite thick, losing the feeling of overflowing the eye.

Two further changes are also noticeable on the design of the S10 + is the rear camera cluster with a third camera and fingerprint sensor on the back that no longer moves forward, placed in the screen.

Galaxy S10 + still uses metal frame design, two glass surfaces and a typical Samsung screen. But the new point is that the two edges of the screen are less curved, harmoniously balanced. The body thickness is also better optimized (7.8mm versus 8.5mm on S9 +) and significantly lighter (the S10 + has a glass back of 175g, compared to 189g on S9 +). The components of the chassis, the glass face and the screen are well matched, creating a more comfortable grip experience than the older generation.

Meanwhile, Samsung is a rare company that does not cause users to lose things that have become familiar with smartphones. Galaxy S10 + still has audio jack, memory card slot, fingerprint sensor, IP68 water dust resistance, heart rate sensor, cord charger and wireless charger, and can even be reversed for devices Other devices like Galaxy Buds headphones or Galaxy Active watches.

Although the upper border is thin, there is still enough land to arrange the speaker in a familiar position. Light and proximity sensors are also available, which Samsung put in the screen in place of the network symbol and battery. The only two things to “sacrifice” on the Galaxy S10 + to have a thin upper border are the LED notification light and iris sensor, which is available on previous Galaxy S lifetimes.

Overall, Samsung has created a new look in the design of Galaxy S10 + with perforated screen. In particular, the fine-tuning of the screen’s curvature, body thickness and finish give a comfortable grip and makes the phone look more balanced. Those who criticize Galaxy S8 / S9 with too many curved screens will probably like to change on S10 +.

Galaxy S10 is Samsung’s first smartphone series using Dynamic AMOLED panels. This background is still the Super AMOLED panel as in previous years but improved in brightness, color range and for the first time supporting HDR10 +, the content standard currently only offers YouTube and Prime Video video service from Amazon. The screen of the S10 + has a size of 6.4 inches, a ratio of 19: 9, a resolution of 1,440 x 3,040 pixels with a very high pixel density, 526 PPI.

The quality of the S10 + panels is still very impressive with the characteristic of Super AMOLED screen: bright colors, clear, wide viewing angle and especially higher brightness than the old S9 + generation, can look good when used outdoor use.

In older Galaxy S generations, Samsung offers up to 4 different color modes. But on S10 +, the company now maintains only two color modes: Vivid and Natural. Vivid color mode displays the brilliant color of AMOLED panels and allows color temperature adjustment with 5 levels from cold to warm. Meanwhile, the color mode Naturally reproduces the colors more faithfully, closer to the IPS LCD screens. Depending on your needs, you can choose the appropriate color mode. For example, in normal use, choose the vivid color mode to catch the eye, and when you need to see the image in the standard color, select the Natural color mode.

Ultrasonic fingerprint sensor in the screen

In addition to ultrasonic sensors, the S10 + can also be unlocked by recognizing the face from the front camera quickly and steadily, even in low light, but the safety is not high. 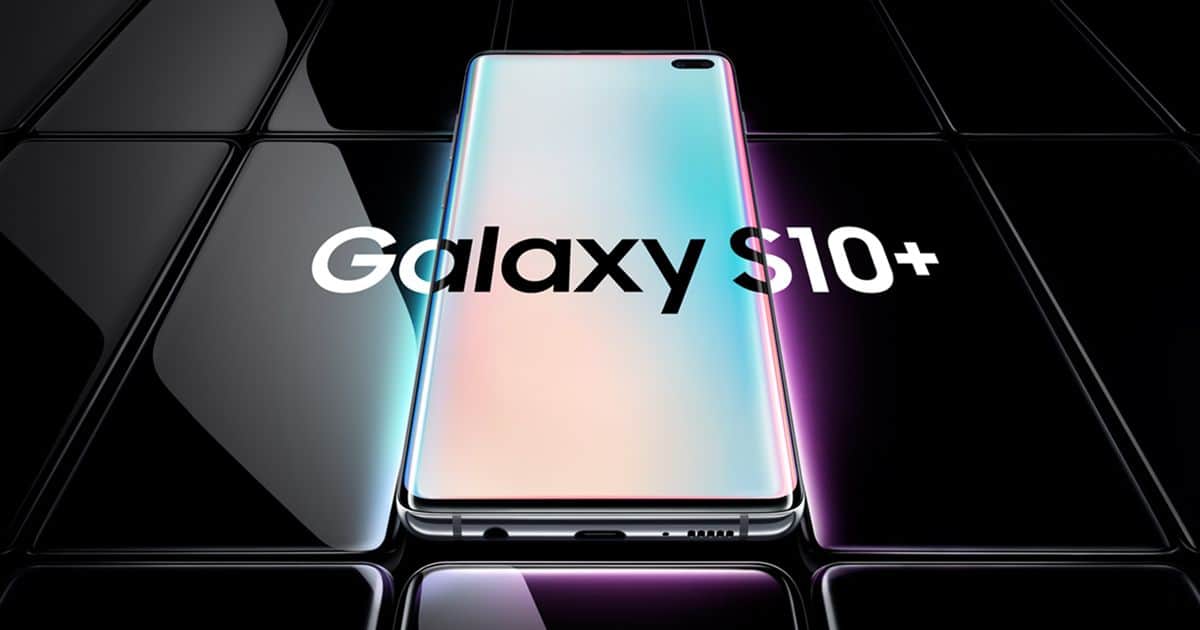 Before Galaxy S10 was released, the new One UI software based on Android 9 was updated by Samsung for Galaxy S9 / S9 + but Galaxy S10 + was the first phone shipped with One UI software. This is Samsung’s major software update with the interface renewed in a flatter way, applications such as Settings look simpler and more intuitive, the icons of the applications are rounded.

Not only the appearance, the biggest change in One UI is that the interaction points are pulled down to the bottom of the screen for users to use one hand more conveniently. Throughout Samsung’s entire interface and own applications, the main interaction points are all brought down to the bottom half of the screen, the upper part is for display only, not for interactive elements. Of course, this philosophy does not apply to third-party applications.

Another new point about the software that needs to be mentioned is the Night Mode which has been operating on the entire system. After activation, Samsung’s entire app will switch to a black-and-white text interface, which will look better when used at night. In particular, the dark interface looks very impressive on OLED screens due to deep black.

In addition to the new points on the basic features on the phone are still inherited such as Game Launcher, dual application, security folder, gesture navigation instead of navigation keys in the screen and gestures just swipe to perform some functions when the screen is on / off …

The genuine version of Galaxy S10 + sold in Asian uses Exynos 9820 processor. This chip is produced on 8nm process, has 8 CPU cores including 2 Mongoose M4 cores at 2.7 GHz, 2 Cortex-A75 cores with speed 2.4 GHz and 4 Cortex-A55 cores running at 1.9 GHz for lightweight applications. GPU graphics core is Mali-G76 MP12. In terms of memory, the popular S10 + has 8GB of RAM and 128GB internal memory and 512GB, while the higher version has 12GB of RAM and 1TB of memory.

On performance measurement applications, the Exynos 9820 chip showed significant performance improvements compared to Exynos 9810 on the old Galaxy S9 +. The performance score of Galaxy S10 + is no less than any other top smartphone. Especially in measuring CPU performance on GeekBench, the single-core performance of Exynos 9820 proved to be superior to other high-end smartphones.

In practical use, it is not surprising that the performance of S10 + responds very quickly and smoothly. Applications open almost immediately, page scrolls and motion effects on the software interface are smooth. Multitasking is also better than the iPhone XS Max or other Snapdragon 855 phones like Xiaomi Mi 9. In the BiaReview test, Galaxy S10 + retains multitasking all 10 games while the Mi 9 only holds 4 / 10 games.

For a more thorough evaluation of performance, we used the Gamebench app to measure stability and smoothness when playing heavy graphics games such as Warhammer 40,000: Freeblade and Dead Triggers 2. With both games The S10 + is stable, with a maximum frame rate of 60 fps in the highest graphics mode. With PUBG Mobile, the device achieved a frame rate of 39 fps with a high stability of 97%. PUGB Mobile game has not been optimally optimized on mobile platforms, so most high-end smartphones now only reach 39 fps back.

where can you get a SAMSUNG GALAXY S10 PLUS online

BiaReview has a detailed review of the battery of Galaxy S10 + in terms of practical use, charging speed from the charging cord, wireless charging bulbs and the wireless charging in reverse for other devices. In general, the device has time to use “longer” in high-end smartphone group, significantly improved compared to the old Galaxy S9 +.

Samsung is slow in the dual camera movement, until the Galaxy S9 + is available, but “catch trend” very fast in the 3 camera movement when the Galaxy S10 + is equipped with an extra-wide ultra wide-angle camera next to a telephoto and standard camera.

The 16MP super wide-angle camera on the S10 + has a shooting angle of up to 123 degrees, a 12mm focal length, a f / 2.2 aperture, which is one of the widest angle cameras available on smartphones. The remaining two cameras behind inherit from the S9 + and Note 9, both with 12MP resolution and support for optical stabilization (OIS).

In terms of software, the AI ​​scene detection mode on S10 + has increased by 10 more, bringing the total number of scenes that the machine automatically recognizes to 30 total and has night mode to improve low-light shots.

The emergence of wide-angle lenses offers interesting shooting experiences, especially when photographing landscapes, architecture and in narrow spaces. The wide-angle camera captures the whole scene, creating more eye-catching photos with stretched space. In the same position, if you only use a normal camera, your photo may not be impressive, but when transferred to a wide-angle camera, the captured image will be much more eye-catching thanks to a new perspective.

Besides the wide-angle camera, the image quality from the main camera of the S10 + is not too different from the recent generations like S9 + or Note 9. Shooting speed and focus are still the strongest points on Samsung’s flagship. I almost never have to wait for the camera to focus or save images in any situation when it is very dim.

The feature of removing fonts on S10 + also has some new features. It will no longer use a telephoto camera in this mode, but only a standard camera. In addition to blurring the usual backdrop, the S10 + adds the effect of simulating a twisted or zoomed bokeh and moving the background to an interesting black-and-white format, creating new fonts to remove fonts.

Quality delete fonts very well. The background is removed naturally, not too harsh, not being dragged into the hair or shoulders. The intersection between the subject and the background is soft and smooth. The gaps between the hands and the person are well removed, without deleting or missing. Users can choose the level of font deletion both before and after shooting very flexibly.

The quality of selfie images of S10 + has made significant progress compared to previous generations. Photo has sharpness, high detail, bright colors, impressive bright strip. Compared to the fuzzy style, pale colors often seen on Samsung’s previous selfie cameras, it can be seen that the Korean phone company has made remarkable improvements. Selfie camera allows to choose between 2 close-angle or wide-angle camera, suitable for taking selfie or selfie group. You can also use the wide angle to make your face look slimmer.

The beauty or erase mode of fonts all work effectively, creating more “sparkling” selfie photos but not over-expression like before. This is the right direction that Samsung should continue to develop on the next generation.

Compared to the old generation, everything on the Galaxy S10 + is better or less good. Design is definitely the most prominent improvement point on this phone. Not only is the use of a perforated solution containing a front camera for thin edges on all four sides, adjustments to the body thickness and curvature of the screen edges have created a balance and a comfortable grip.

Not only has the wide-angle camera added, the quality of shooting from the S10 +’s front camera is also more impressive than the older generation. Meanwhile, screen quality, battery life and performance also improved slightly compared to the S9 +. Therefore, in short, Galaxy S10 + is Samsung’s best smartphone today. However, there are also some things that Samsung wishes to improve in this phone is the more stable ultrasonic fingerprint sensor and the ability to focus on wide-angle camera.

1 thought on “SAMSUNG GALAXY S10 PLUS”