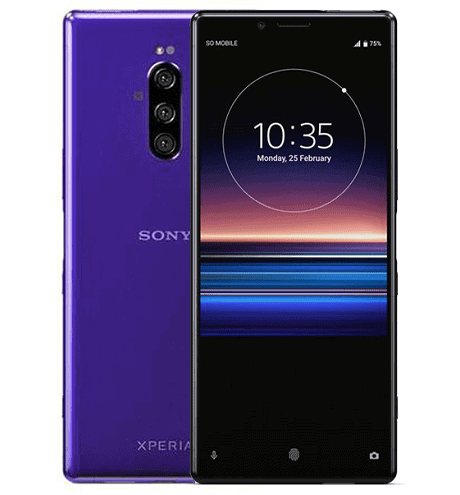 The phone is large but the handle is very neat

The top advantage of Xperia 1 is its giant screen. The size of 6.5 inches is similar to many other smartphones this year. But don’t think it’s terrible, with the 21: 9 ratio, Xperia 1 has a much narrower width than its competitors.

We always felt confused with today’s phones. The big one has a big screen for entertainment, but the ergonomics are unpleasant. On the contrary, we loves the compact phones that fit in one hand, but sometimes they become cramped because of screen limitations.

Sony Xperia 1 as “savior” appears to solve this problem. With a large screen, more in length, the display of content vertically is much better, especially when surfing the web, Twitter, email, … Along with that, the machine is also easy to hold comfortably with just one hand or The keystroke with just one finger is also very convenient. If you often use multitasking features to split the screen, Xperia 1 clearly brings a truly superior experience.

But nothing is perfect, is it? After all, Xperia 1 is still a big screen phone. The big screen helps us experience more, but the operation space is also larger, so you have to use two hands to use it. The upper area of ​​the screen (where the notification bar is located, quick setting) is far from the finger. Not to mention the height above other phones, Xperia 1 is very difficult to fit in a pocket. It always left a part out of the pocket of his jeans, sometimes even falling out. Fortunately, the Gorilla Glass glass has survived!

The button position design is also ridiculous. Sony put a lot of keys to the right, camera key, power key, fingerprint sensor and volume key. We admits to clicking the wrong one every time. So, the most bizarre thing is not the separation of the power key and fingerprint sensor (in the previous generation Z5, Sony has integrated), but the easy-to-dirt keys. You must wipe them quickly before each use. The only great thing to compensate, double-clicking the power key will immediately activate the virtual assistant Google Assistant.

21: 9 CinemaWide Display with many technologies

Sony says this is a 4K HDR OLED display with movie standard 21: 9. Somewhat slightly different from the previous 4K on Xperia phones, but if you’re not counting every pixel every day, there’s no difference.

As usual, the company insisted on HDR, but from a personal point of view, We did not believe that the phone HDR screen was something everyone could enjoy every day. However, there is one thing the author is attracted to Sony: Creator Mode. The display that tries to bring colors to Xperia 1 becomes nearly the same color on a reference screen – something Sony sells to Hollywood studios for $ 30,000.

Of course, its limited phone, Xperia 1 does not completely become a professional screen only by such algorithms. But when you turn on Creator Mode, it makes the colors more accurate, unlike the brilliant ones you might have experienced on other phones. You can set up your own Creator Mode for specific supported applications, for example Netflix.

Briefly about the Netflix movie experience, this is exactly the “phone to produce movies” like Sony advertised. Best of all, it is not disabled by rabbit ears or water droplets, full display, stereo speakers, Dolby Atmos sound, shimmering colors. However, the problem is also here.

The main content that The Verge writes is not cinematic 21: 9 ratio. Mostly still 4: 3 or 16: 9 on YouTube, the rates that even 18: 9 or 19: 9 screen phones don’t show up well. No matter what the ratio, you still have to choose between enlarging the video and losing the detail at the edge, or watching with the big black bar on the side.

Even though it’s such a mess, the biggest problem with this monitor is when outdoors. Xperia 1 is not bright enough like other OLED phones.

The software supports large screen is not complete

Sony offers two software tips to take advantage of the big screen on the Xperia. The first is to double-click the Home key to minimize the area used. It runs well and you can resize the window to your liking.

The other trick is the Side sense, and it’s really bad. Like Samsung Edge Sense, Sony offers a feature that gives you quick access to applications every time you interact with the edge. From the menu, you can go to an application, drag the notification bar, run the application in split screen mode, … Pretty much interesting except that, the algorithm fails right from the launch in time.

At the edge of the screen, you can touch or slide to activate Side sense. But the reality is not as simple as the theory. It never worked as intended by Dieter Bohn, when he tried to open it but it didn’t run, when it opened itself when he didn’t want to.

There is a long-standing mystery in the smartphone world. Nearly every phone with excellent imaging uses Sony sensors. Sony is also known for providing image quality below expectations, right on its flagship phone. Of course, the two parts of the phone manufacturing and sensors work independently of each other. But why is the camera on the Xperia inferior for so long?

With the Xperia 1, We thinks Sony has come closer to breaking the weird “curse”. Image quality has improved a lot better, though still not comparable to OnePlus 7 Pro or Google Pixel 3. It has three 26mm normal shooting lenses, 16mm ultra-wide shooting and 52mm telephoto shooting that supports 2x zoom. Wide angle tube captures happily as expected, only the quality stops at an average level. Sony has a distortion correction feature, which is useful when you want to get the widest possible angle but don’t want the object to bend.

A major improvement is Eye AF, borrowed from the Alpha camera group. You will see a small square with focus right into the subject’s eyes. It works very well. Portrait mode is not so impressive. Perhaps the Pixel 3 software was far ahead of Sony. But in return, the camera boots quickly and works stably.

For 8MP selfie camera, forget it! Lousy photos and perhaps the poorest beauty filters ever tried by the author.

Overall, We judged that the Xperia 1 algorithm will try to store a lot of details, but that also means that the image gets more noise. Also, automatic HDR on Xperia is very bad and other phones do much better. You may have to use manual mode if you want to have a true HDR image.

There is one thing that makes our surprised about the camera in a positive way. The machine does not provide night photography features that are becoming a trend in mobile. But when shooting in the evening in auto mode, Xperia 1 will extend the recording time and the results will be perfectly fine. Photos that are not styled “turn night into day” like Huawei and Google do but it is good because The Verge found that the special modes taken the night before did everything.

Sony also offers an application called Cinema Pro. The software is based on their CineAlta VENICE movie camera, playing a key role for the upcoming Avatar. Cinema Pro allows you to shoot videos up to 4K with full manual options. It has an intuitive interface and is easy to get used to, more things than traditional video recorders, but disables optical image stabilization (OIS). However, perhaps that’s the way a videographer will use Xperia 1, attaching to anti-shake (gimbal) racks instead of hand-held.

where can you get a Sony XPERIA 1 online

Like all modern Android phones, the Xperia 1 has a Snapdragon 855 processor. Combined with an almost original Android version, this makes for an agile phone. It has 6GB of RAM and only one storage option is 128GB. The author is a bit uncomfortable about storage capacity (especially at this price), but fortunately the machine is easily expandable with microSD card slot.

Battery life is average, at least considering the 6.5-inch 4K screen of the device. Our device reaches over 4 hours onscreen and is enough for one day. With a capacity of 3,300mAh, it can be noticed that it is not enough if you use the camera at higher intensity. The machine also has a minus point of not supporting wireless charging, surprisingly the XZ2 is equipped.

However, Sony did the right thing. It has software to adjust the charging current for those who charge overnight. At this point, Xperia 1 will not charge quickly but keep the battery close, only until morning will it load enough energy to extend battery life. This is what Apple has learned on iOS 13.

Xperia phones in history are a clear manifestation of the worst parts of the Sony brand: the price is too high, the software is bad and designed just to be beautiful but ignore the ergonomics.

Xperia 1 has solved most of the problems on predecessors. The software is smooth, neat, although there are silly things like Side sense. The camera clearly improved despite not being able to lead the market, with Eye AF borrowing from the mirrorless team very well. The grip design is neat, even with its oversized long size, which stands out from the current smartphone crowd. The Verge really likes this style and appreciates Sony’s effort after XZ2, XZ3.

The last thing is nothing new, Sony is still Sony. The price of 950 USD is really too much compared to what Xperia 1 brings. If Sony were to give in a bit, lower the price by a few hundred dollars, equivalent to the OnePlus 7 Pro – 750 USD for the highest configuration – perhaps everything was different. Xperia 1 will be much better than $ 950.

Xperia 1 is a really nice phone, it makes you think maybe Sony should not lower its ambition in mobile. But for $ 950, we expects more and so should you!

One thought on “Sony XPERIA 1”