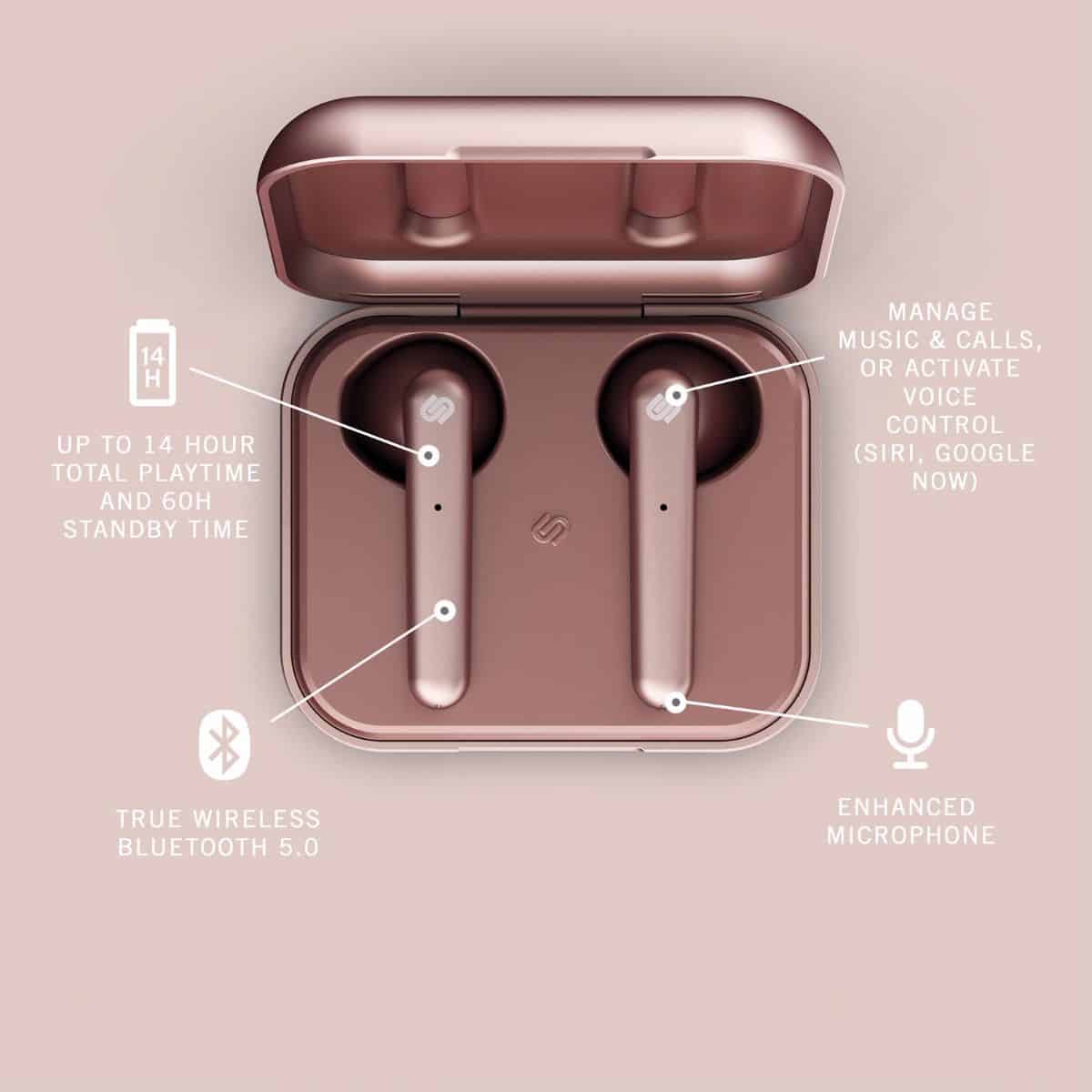 Until now, Urbanista is the company that I have most appreciated about box: always beautiful but not too fussy, cumbersome. Stockholm of course is not out of this judgment.

The box opened with magnets, we could see the headset and the charging box through cellophane.

Since this is a pair of ear-bud headphones, worn on the outside of the ear, the inside of the box doesn’t have the same suckers as the Inear headphones, so there’s only one more micro USB charging cord.

It is very hard to deny: Urbanista Stockholm has a design that takes a lot of ideas from the famous Apple ‘AirPods’ headset pair, but except for the charger box there is a difference.

The box has the box size of the AirPods but it opens horizontally, placing the flat headset inward rather than pulling it from the lid. In my opinion this is a convenient design, easier to get out. The headset has a listening time of about 3 ưỡi hours and can be filled up 3 times more in this box to increase the total time to 14 hours.

As for headphones, we can see clearly the inspiration from AirPods: a pair of Earbud made of plastic, worn directly into the ear, not with silicon buffers. The outside of the headset also has touch, let users play / stop music, adjust volume, call virtual assistant, but the difference is that it works with both Android, Mac and iOS, not just Apple products like AirPods.

The latest Bluetooth 5.0 standard headset, a plus point for Urbanista was very quick to adopt new technology. This Bluetooth standard has many advantages, including reducing latency when playing games and watching movies to a minimum, for a more comprehensive experience.

The design of the AirPods in the beginning was criticized by many as ‘weird’, but the latter was more and more accepted when the pair became the world’s best-selling true wireless headset, so surely Stockholm would Don’t surprise anyone about its design.

Weakness of this design and earbud in general is the ability to sound not as high as the pair of In-ear headphones. This is also the opposite for those who just want to listen to music and want to hear outside sounds, to ensure their own safety. This is depending on the usage of each person, so I do not comment further.

Stockholm in fact when you talk you will hear the voice of the other side over both left and right ears, the sound is very clear. Your voice recording microphone will be located in the ear is the right ear, the left ear does not have a microphone for conversation. But because the dual mic is used in the right ear, the recording mic quality is very good, the sound on the other side will hear the sound you speak very clearly, and the noise is also filtered pretty much, so if you use Stockholm For peace of mind, it’s fine.

Although the design is inspired by AirPods, Stockholm owns a slightly more Urbanista sound quality: slightly dark, leaning back, easy to listen to without too much bass mid and somewhat harsh like headphones from Apple.

But a Stockholm thing is similar to AirPods, which is a deep concentration mainly in Mid bass, not deep down. This is also understandable, these 2 pairs of headphones are all worn out earbud, so when it comes to the ears of the listeners, it has also lost a lot of energy. But in return for luck, Stockholm does not suffer from the biggest disadvantage of Airpod, Stockholm’s bass section has its own space, it is separated without being mixed in mid and treb as in the US headset. Therefore, when listening to music, listeners will feel more harmonious and natural sound. The good bass earbud earplugs are all strong and have the same high capacity as Yuin’s ears, so I can’t blame Stockholm. Those who listen to music gently, can fit into Stockholm’s bass, but for those who rely heavily on this band, they should consider the other Inear headphones.

The difference starts to show up when we enter the mid range. The Mid of AirPods is very close to the listener, along with a slightly higher brightness than average, which can cause sibalance. In contrast, Stockholm when worn correctly gives a slightly darker, thicker voice and warmth. Alison Krauss voice in Could you lie very comfortable, bold and keep enough airy. This is a good mid-range, not really outstanding (because the high-mid part is not bright) but holds the style of a pair of earbud headphones. The details of the singer’s vocals stopped quite well, and for those who were familiar with Inear’s sound, it might be strange, but it would definitely suit those who liked to wear Earbud before.

This sound quality continues with the treble band. This range does not reach the highest frequencies, but compensates the listener with warmth, ease of listening. Personally, I still want to have a more robust treble, but as mentioned above, Stockholm is made to have the sound laid back, listening to many hours, making the treble stronger might not be suitable.

where can you get a Urbanista Stockholm online

Stockholm is indeed a pair of special headphones, not only continuing the tradition of earbud headphones but also equipped with the latest technologies such as true wireless, Bluetooth 5.0 and touch control. Easy listening, musical sound and pretty detail. This is definitely a serious competitor, a great alternative to the Apple AirPods pair for those who do not use the products of ‘Apple’.

– Has touch control, full features, volume up and down, stop, receive calls, ….

– Harmonious sound, quite easy to hear

– The singer voice is warm and comfortable

– The bass is quite weak