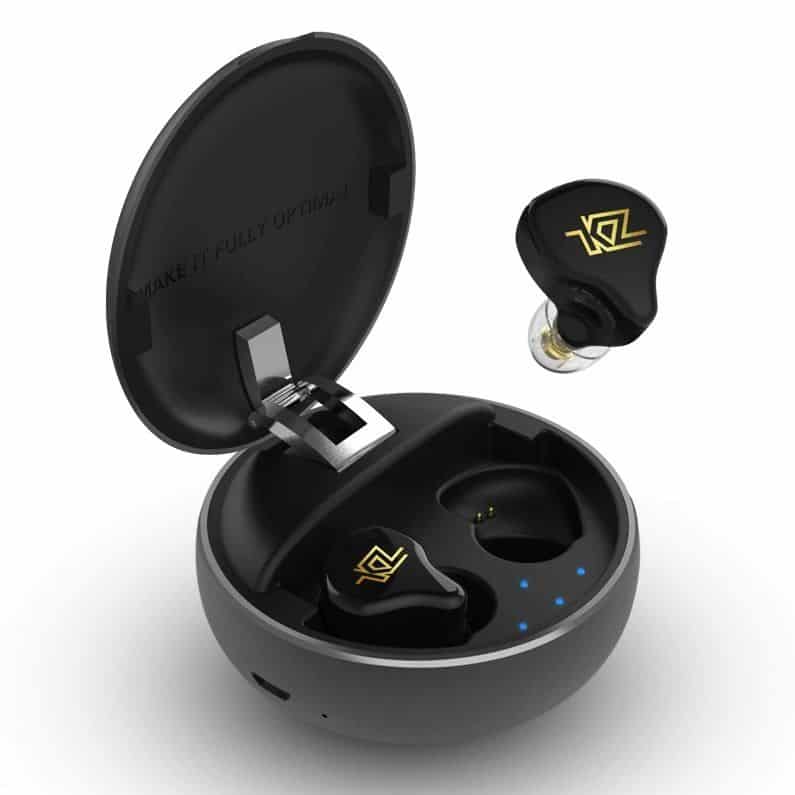 Get the black tape stuck to the KZ Logo and then advertise that this is a headset from a famous brand such as Noble, I believe that many people will nod. The KZ T1 TWS was made exactly like an expensive Custom IEM model that had its wires removed.

I’m not a manufacturer so you ask me what kind of plastic I don’t know. One thing I see is that the material on the KZ T1 is similar to the plastic material of KZ ZS10 PRO. It looks sturdy and very polished, just like Oriolus’ Custom ears.

The molded plastic details, the interface between the faceplate and the main body of the housing is very tight and smooth, there are no rough or concave areas here.

The drain pipe on the KZ T1 TWS is made of metal. It’s unbelievable that a True Wireless headset costs more than $50 and makes it sound like a flagship IEM headset.

If I compliment the charger box, if you tell me I’m a seeder, I’ll still compliment. Why, because it’s so beautiful. Monolithic metal, CNC milling, with diamond cut, hinge metal also. But on the lid of the box, there is a familiar words “MAKE IT FULLY OPTIMAL”. That’s right, brother lost to TFZ X1 here. I recommend that the KZ T1’s charging box be placed in the same house as the TFZ X1’s box. That is why it is so beautiful and strong.

However beautiful is not enough, the lid of the KZ T1 is still very difficult to open with one hand because the metal lid is too tight.

Inside of the box we have 4 battery level indicator lights arranged in triangle position instead of a strip. A very interesting and creative design of the KZ house.

KZ T1 and charger box are equipped with positioning magnets.

Regarding the hardware on the KZ T1 TWS, not too many advanced technologies are equipped for this headset. Also Bluetooth 5.0 like many other earphones of the same range. The chip is unknown from which manufacturer but it is certainly not Qualcomm. So we don’t have the APTX codec on this headset, the latest CvC noise cancellation algorithm, no low power consumption mode.

The only highlight on KZ T1 TWS is the equipped with 2 drivers, 1 dynamic driver for the low and midrange and 1 BA driver for the high range. What even the current flagship headphones do not have a big company dare to do. In theory, using two hybrid drivers will undoubtedly provide a much more detailed audio experience than a traditional driver. That is exactly what KZ T1 TWS emphasizes.

Looking at the battery capacity, I felt down for 5 seconds. Only 3 hours of use for a full charge only. The weakness of a high configuration product, beautiful design and cheap price are clearly revealed. KZ saves costs by using an energy-efficient chip. In addition, the simultaneous dragging of two audio drivers makes the energy of KZ T1 TWS drowned significantly more than the current competitors.

where can you get a KZ T1 TWS online

Wearing KZ T1 TWS on the ear feels just like wearing KZ ZS10 PRO not wire. For anyone with average ear size like me, it sticks very well without any earhook. The weight of each ear is only about 5g, so the feeling of wearing is very light and comfortable. If you are willing to invest in a few more Spinfit pairs, make sure to fit and stick to the ear.

Regarding connection, KZ T1 TWS does very well. Extremely simple and fast connection. No disconnection and no interruption of sound. The left ear is the main ear, the right ear is the secondary ear, so when you put the left ear into the charging box, you will lose connection with the other ear. The two ears connect automatically when you remove 2 ears from the charger at the same time.

A plus point for KZ T1 TWS is that touch control instead of hard buttons like the earphones of the same range. Touch control is much more convenient and comfortable than pressing the hard button.

Finally, the most expected part is the sound quality. The overall sound of KZ T1 TWS is V-Shape, bass is deep, treble goes up, mid is slightly backward. The sound is very seamless, playful and lively, without the feeling of breaking the sound of cheap hybird headphones.

Bass: KZ’s bass is good and quality. Down is deep, not just focused on mid-bass. Having a full body, hitting neat and tense but still controlling but not being flared, encroaching into the mid range. It’s undeniable that the KZ T1 TWS has the most impressive bass of the cheap True Wireless models I’ve ever heard.

Mid tones: Warm, clear, and very detailed. Thanks to the quality bass strip, the mid strip also inherits the deep, full low mid. KZ T1 TWS can play both male and female vocals well. The sound of the instrument is quite detailed, clear, separated rather than mixed into the score.

Treble sound: Add a highlight in the sound of KZ T1 TWS when the treble range is very coming. Thanks to the separate BA driver, the treble has good accuracy, the voice is still crunchy and detailed. Absolutely no glare phenomenon or sibilant due to sloppy tune like previous models of KZ.

KZ T1 TWS can do extremely well, from EDM to Hard Rock, it fulfills the role of a music headset.

As you can see, the KZ T1 TWS has sound and design strengths, a weak point is the battery. Can not ask for a cheap headset that can do anything.

The decision to own or not is entirely up to you, I just make the most objective assessment possible

– Impressive sound in the price range

– The battery is only up to 3 hours

– Does not support noise filtering when talking.