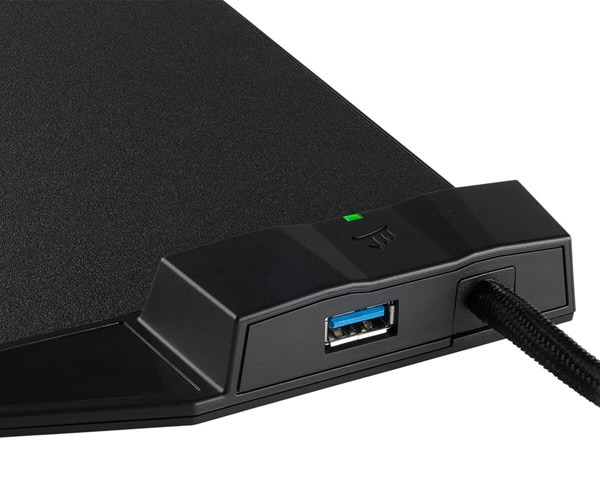 The position “invincible” in the world of wireless-charging mousepad since the launch of the Powerplay is gradually being broken by the manufacturers of gaming gear, many companies are constantly developing their technology to not want the opponents their own leadership position. One of the big guys in the high-end gaming gear bravely continued to change this when another major company, Razer, released their own wireless charging pad and, to no less extent, when Logitech and Razer called, Corsair responded when it released the product to users considered direct competitors to Logitech Powerplay and Razer Firefly HyperFlux, which is the MM1000 liner.

About the parameters of the pad:

– Material: hard plastic, rough on the using surface, anti-slip rubber on the bottom.

– Design: The corners are rounded without corners.

Talking about the material, MM1000 is manufactured with a hard plastic surface with a slightly rough surface, the back of the pad is equipped with rubber points that help fix the position of the pad and increase anti-slip when used. Since it is a hard pad, the MM1000 is very suitable for those who have a habit of using fast mouseovers, especially those using a mouse with a low DPI, but on the other hand, this is quite uncomfortable for those who are fanboys in particular. This company or those who love to use soft mouse pad in general always like to roll the mouse pad and take it with you.

The use of hard plastic material on this surface is also quite a pity Corsair becomes quite “economical” by not adding another soft pad surface like the Powerplay or making the pad capable of changing. The surface is as flexible as the one on the Firefly, but it is also possible that it is a part that can make the price of the MM1000 much more comfortable than its competitors.

The MM1000’s appearance is not too colorful, because the overall design of this pad is not equipped with RGB LEDs, which is a bit of a loss with a gaming gear product that can be said in this high-end segment, Personally, I hope in the future the company will add RGB LED features on its products to be able to compete aesthetically with products in the same segment. All the lights on the MM1000 have only 1 small LED indicator when a charging device is located in the pad processor. But this can always be the go-to for those with a simple, non-fancy, and feature-minded look.

Cable connection is also quite an interesting part of this pad when its wire is wrapped and thicker is quite large compared to the connection cord of the other wireless-charging mousepad. The reason is the cord is not just plugging and providing charging power, but it also includes a USB hub connection cord to connect USB-A devices on the pad itself, a feature. Commonly found on Corsair products, it helps us to have a close, USB port much more convenient, the connection cable is thick but it offers durability thanks to the umbrella cover and its thickness.

About the most special feature of this pad, the most outstanding feature that we must first mention is that the MM1000 is also capable of charging wireless mice similar to the Powerplay and Firefly.

Compared to its two competitors, the wireless charging feature of MM1000 is completely superior when it not only can charge its mouse device but also can charge mobile devices such as smartphones and tablet standard wireless charging. Although it is not a fast-charging standard, the fact that this pad has smart charging technology has made the layout of the gaming corner, working, much more convenient in terms of arranging wires on the corner to the computer. Because we have saved an amount of space on charging cables as well as charging docks for other devices such as phones as well as tablets.

Especially with the unprecedented Qi® connection technology that the company has introduced in the product, this Qi® technology includes an adapter included in the same pad which is what makes devices not able to charge. Wireless connectivity can also be charged on the pad too. This is thanks to the adoption of an adapter with available connectors, which include compatible ports for Type-C devices, Micro USB, and Lightning for Android devices or older products. But after all, the pad-charging solution for devices other than the mouse is just a “situational” solution when the amount of charging power is quite low.

A strong point as well as its other weakness is that it can only be charged when the mouse is placed in the upper right corner in the correct position that the manufacturer has specified on the pad, as well as the position location to use the Qi® connection. About this right corner position, there is a very convenient point about the charging position that it takes advantage of the little area of ​​the pad to supply power to the charging device, but this is also limited because this is the only contact place. Most of the pad with the ability to charge the wireless device limits the area of ​​the charging surface than the Powerplay and the Firefly. This means that the ability to simultaneously charge and use at the same time flexibly on the surface of this pad is impossible.

For new users or users who are starting to switch from soft mousepads to hard mousepads, the first thing that is a bit awkward is their habit of leaning on their pad, the intensity of long-term use always makes. Our hands tend to rest on the pad so it takes a while to get used to the hardness of the surface to change this habit. As mentioned above, hovering over the MM1000 is great for those with a hobby or habit of using a mouse with high mouse speed, for gamers with good mouse control, this is A huge advantage when they save a lot of effort when moving the mouse, with the MM1000 surface matte black surface that helps minimize lift-off on the mouse.

For users who care about neatness, as well as enhancing minimalism in their desktop and gaming corners, this Corsair MM1000 hard pad deserves attention because its design is not too demanding. In terms of color, but in return for it is the convenience especially in the ability to wirelessly charge not only a lot of devices, which contributes to the area on the desk that is not too entangled by the charging connectors or entangled charging docks.

In this segment considered as Hi-end gaming gear, the price compared to what it offers is completely reasonable, if not cheaper than Logitech’s Powerplay or even better, the HyperFlux duo: The Mamba and Firefly when the Razer couple can only be bought in sets and the price are much higher than the MM1000.

where can you get a Corsair MM1000 Qi Wireless Charging online